I am rather enjoying all the random Star Wars-related discussion I have with various people. I may not adore the movie, but it sure is good for conversation!

Putting this snippet from a chat with Day here so I don’t forget it. I was so amused…

Day: Maybe Kylo underperformed [in the final fight with Rey] because he gets nervous around women

Y (me): But initially he dealt with her just fine? He could literally freeze her in place and make her pass out

D: That’s before he realized his physical attraction to her – or at least that’s what might be said in a psychosexual analysis of the movie haha
After all, his nerves begin to show after he “reveals” himself to her. And fight scenes can be read as a sort of stand-in for intimacy

Y: I feel like there will probably be (if there isn’t already) a fanfic that does exactly what you say
In this fanfic, Kylo would find himself terribly attracted to her latent force powers as well as her looks and fighting prowess
And he will find himself more drawn to the light side as a result
Snoke will promptly say he now has to kill Rey
Kylo Ren will then suffer agonies of conscience and heart
Before ultimately meeting Rey in a fight and discovering that he cannot bring himself to do it
Falls to his knees and begs Rey to kill him
But of course she doesn’t and they run off together – he reforms, and repents of course
The end

D: Sounds like it writes itself! Probably already has been written haha

Y: This would become very disturbing if in later movies we discover that they are siblings

Some students at one of the tables in my class this morning were talking about random stuff as they did their drawing exercise for the day. I walked by and one asked me:

“Miss, what they call those people who believe in chakras and that kind of thing ah?”

Her classmate on the other side of the table said, “Naruto.”

(After I stopped laughing I told her that I think those tend to fall under the New Age-y category nowadays?)

Last month I helped Kristy get ribbon to use as entry wristbands for the dance party. She told me that, “If each ribbon is 30cm, I need 2.3m for 75 wrists.”

Amazingly, all I had was a passing thought that something felt off about that but I didn’t think about it anymore. I got that message in the morning when I was in the Board of Examiners meeting. Then at night when I was at Daiso to look for the ribbons… 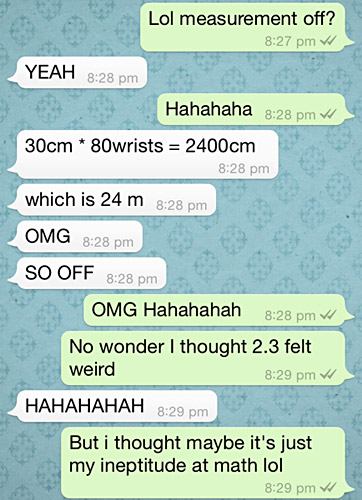 Terrible, the both of us. HAHAHA

If she thought I didn’t understand Japanese, why speak to me in Japanese in the first place? lol.

At the very least, The Dark Knight Rises has provided me with some laughs.

Journey: So many plot holes too. The movie lost me as soon as Bane took over the city
Me: Hole-y story, Batman
J: Bwahaha!

(Ye-ah, I think I’m only able to crack geek jokes. Now that I think about it, if I’d tried the same line with most other people I know, all I’d have gotten would be blank stares… This sort of joke requires at least minimal geek knowledge and an apprecation of puns and such.)

Then, talking about how we and one of our ex-classmates, Remington, seem to be in the minority group that doesn’t much like TDKR…

J: We are the 1 percent!
Y: Hahaha!!
The privileged elite? Lol
J: Let’s hope we don’t have to appear in the DKR lovers’ kangaroo court
Y: Would Batman come save us? (haha kind of ironic, that)
J: Yes but let’s hope he doesn’t read our blogs. haha
Y: Maybe if it was John Blake as Batman.
That Batman would happily save us since we praised him [in our reviews]

Speaking of reviews, check out their pieces on The Dark Knight Rises: Journey points out the awkward turns in the narrative and questions why Nolan opted for the ending that he did; whilst Remington pronounces the film “overstuffed” and marks John Blake as the surprising star of the story. And they both remark on the ineffectiveness of Bane as the antagonist (something I forgot to do in my own blog post on the subject). We three agree, though, that John Blake is pretty darn cool and that on a purely technical level, TDKR can’t be faulted. The flaws are all in the narrative. But yeah, we’re in the minority. Clearly. haha

A conversation on Whatsapp between my youngest sister and me…

Yan: At least I know that Darth Vader is Luke Skywalker’s dad?

Me: But you don’t know who Luke Skywalker is

Me: This goes on my blog

Yan: I sense this conversation going into your blog.
Omg I knew it

Talk about the impossible connection. Anakin = Vader = Luke’s father, Hayden = Luke, but Hayden = Vader… therefore Hayden is his own father and son? o_O

The news about the escaped penguin in Tokyo just amuses me. Headlines like “Tokyo Search for Young Penguin Escapee” (BBC) and “Tokyo aquarium’s penguin still at large, touring rivers” (Japan Times) are so funny.

I was chatting with Day about it…

And then I ended up writing another (semi-)nonsensical poem.
.
END_OF_DOCUMENT_TOKEN_TO_BE_REPLACED

(#18 because according to my category list there are so far 17 posts in the “Conversations” category and this is the eighteenth.)

Last Friday night, after seeing M:I4 – a short talk about movie sequels/trilogies and why second movies tend to be bad leads to Star Wars and this:

A couple of amusing bits from the weekend.

When waiting for the flight to KL on Saturday, I talked to an American guy for a bit. He asked if he was standing in the correct queue and we exchanged a few remarks. Then he said, “Your English is really good. You must’ve spent some time in America.”

“Hahah! No, I haven’t. Well, I’ve been there, but that was long ago and just for a holiday.”

But almost as though God decided to keep me humble, a few minutes later, that same guy took out his phone, made a call and started speaking in perfectly fluent Mandarin.

*feels small*
(He’s based in China, his family’s there, and he’s been in Asia for more than ten years. No wonder.)

At Jason’s wedding dinner later that same day, there was a slideshow full of photos of Jase and Joanne at various places that they’d visited (including Loch Ness and Edinburgh! *has nostalgic feelings* ). Midway, Chee Yong said, “Wah, people in Europe can really take good photos. You see – all their photos come out so nice wan!”

The others didn’t really believe me until I said I know because I was with them when they went to Loch Ness and they were carting around a tripod with which to take photos of themselves.

“Cheh!” said Chee Yong. “No wonder la the angles so nice and all. I thought so hebat random people on the street also can take such nice photos [for them]!”

Was talking to a couple, Jin and May Ling, at Joanne’s wedding dinner. I’d met them once years ago when I went to visit the Gamebrains studio in the Petronas Twin Towers with Jia Wern. They didn’t remember me, but Jin did recall Jia Wern’s visit to Gamebrains so that got the conversation going. Jin was also classmates with my FA tutors so that was a good starting point too.

Jin, after learning I’m now teaching design: So do you prefer design or film?

Me: I think I do better at design, but I really like film. I finished my Master’s in film studies last year.

Me: Uhm, well, in terms of a film that I really enjoy and that has had an impact on me… I’d say Star Wars.

Yeah, as he put it, most film people would give answers like Citizen Kane or some “obscure, avant-garde French film.”

(May Ling’s also from Penang and also likes Star Wars, which made Jin conclude that there must be something about Penang girls and Star Wars. haha)

I will get around to posting a few photos from the busy, busy weekend sometime. Don’t have many pics though, because I was too busy to be snapping pictures. (Sad…)