And may it be the last…

I think my MMU graduation was a lot less stressful than this one. First, they lost my guest tickets. I was told in an e-mail that they wouldn’t be sending me the guest tickets for the ceremony since I gave a non-UK address and that I could collect my tickets when I checked in for graduation. But they couldn’t find my tickets. Thus I had to go get extra tickets on the day itself and give a whole long explanation for the situation at the ticket ballot booth.

And then on the day itself (yesterday) when I went to get my robes and hood… they couldn’t find those either! aaafdskhfjdslkfjgsghskdjfgskljhskjfaaaaadfhskdjfh

I was half-angry, half-panicky. SO not a fun state to be in, okay. First no tickets, then no robes and hood. It’s like they wanted to give me a heart attack or high blood pressure or something.

Fortunately everything managed to be resolved. But I was in a ‘wonderful’ state of nerves by the time I got into McEwan Hall anyhow.

In comparison, I had such an easy time at MMU’s convo. Checking in was a breeze, I got my tickets and everything in a flash, my robes and everything were where they should be… So headache-free. This one… @_@ So much for Western efficiency. 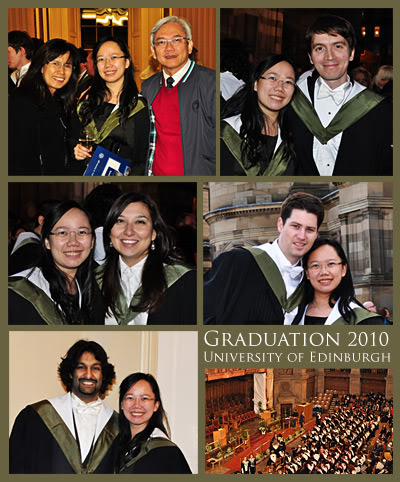 Why so few pics? Because I look terrible in the vast majority of the pictures. The not-so-very-bad ones will require a considerable amount of work before I can bear to let people look at them. And some are just unsalvageable and so will never see the light of day.

That upward angle is horribly unflattering – to everyone; and least of all to me – and I completely forgot that. *headdesk* Should never have taken those pictures on the stairs…

Anyway, those are the few pics that turned out bearable and only needed minor fixes. Hmm, and the longer I look at it the more I like how my fringe looks in the bottom left pic. haha