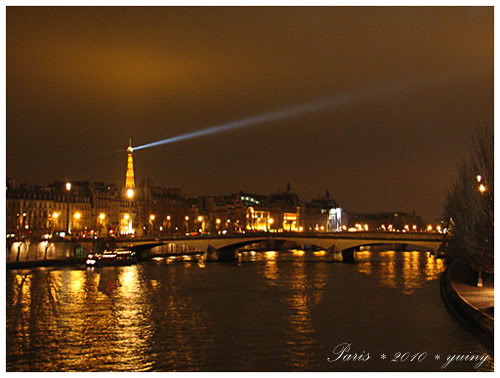 Paris certainly has a lot of beautiful architecture. And it looks lovely at night. But I think I prefer London on the whole. It’s a lot less trying on my nerves.

It is most stressful trying to order something at McDonald’s when the person at the cashier can barely understand English and speaks with such a thick accent that basically all you end up understanding is “frites” and “c’est tout?” (And even then you know you’re lucky to grasp even that because a lot of other poor tourists probably don’t get even those words/phrases.) Fortunately, most do seem to be quite okay with English so I haven’t been forced to attempt to use the handful of French phrases/words that I sort-of-know.

The Paris Metro is trickier to navigate than the London Underground, mostly because I’m so unfamiliar with all the place names and the structure of the stations. Some of the larger train stations feel like absolute mazes – I took several minutes to stare about the Chatelet station, trying to figure out where the exit to the Rue de Rivoli was. The arrows seemed to be pointing vaguely in the same direction and yet also pointing nowhere. Or maybe it’s just me being unusually confused. haha

Also, Parisian drivers are mad. I feel like some of them make it a point to try and run down about three pedestrians a day.

There are extremely persistent (Eastern European?) girls at the busier intersections and touristy areas with dubious-looking petition boards that accost you and just about literally harrass you in a very scary way in an attempt to get you to sign their (possibly fake) petitions for world peace and whatnot. If you – like me – refuse just because (1) they seriously give you the creeps, (2) the ‘petitions’ look suspect (and besides, when you run into various groups of them who all look about the same age and from the same region and who are holding similar-looking petition boards, just with different petitions, you start to wonder…), and (3) they’re so darned rude to begin with (because apparently pushing and poking and pulling at people is the best way to get their signature), they look at you like you’re the scum of the Earth.

I’d rather not visit Paris again without someone who either speaks French or is familiar with the city. Preferably both. Ha. I’m sure Paris is wonderful for people who speak French or who know the city or who are not walking about alone (really, it must be nice to have boyfriend to drag around for things like that *envies Jo and other girl friends who have Someone willing and able to accompany them* ). If I have to be on my own again here, I’m going to hide in the Louvre or some place where I won’t be knocked down by cars or harrassed by horrid petition-getters or whatever you call them. Or, I’ll just have to discover my latent Force powers and make good use of them. Actually, if I had a real lightsaber that would do the trick as well.

I can’t wait to get back to London.