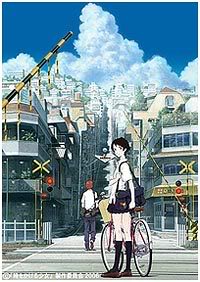 This utterly surprised me by being an excellent movie. I daresay I’m not going to like Paprika half as much, even though Paprika‘s concept is pretty interesting too. But let’s leave comments on that for another time – like after I’ve actually watched it.

In a nutshell, Toki wo Kakeru Shoujo (henceforth Toki) is about a girl, Makoto, who becomes able to time-travel – literally leaping through time – and how she uses this ability of hers and learns the consequences of it.

Animation is pretty fluid and excellent by anime standards. (I was in awe at the Van Gogh-esque, Impressionistic sequences when Makoto first leaps through time!) Character designs aren’t too bad; of course incomparable to character design in the US and Europe, but at least they’re not the type of anime characters where the only difference between characters’ features is hair style/colour and eye colour. Love the backgrounds – beautifully painted and detailed but they don’t distract you from the characters. The voices were cast pretty well. I’m relieved that the girl didn’t have the squeaky, high-pitched type of voice.

Toki‘s storyline is simple enough, but I like the way it captures how a real person without any grandiose ambitions might actually use such an ability (e.g. going back in time to turn a bad day into a good one, avoiding uncomfortable circumstances) and how using that ability can have a negative impact on others, if not on the user. The character relationships – especially Makoto’s relationship with her close friends, Chiaki and Kousuke – are handled quite well too.

The time-travelling method and concept was fairly basic, so I didn’t find myself getting all puzzled over it. (Though perhaps this may be the result of watching Back to the Future so many times… And watching Star Trek… And all that other sci-fi stuff that deals with time travel.)

The twist in Toki was interesting. It’s been a while since I’ve seen a movie where I really wondered what was going to happen next, and when the twist came, it was quite unexpected. I shan’t describe it in detail here – watch it for yourself. hehe
All in all, I’d give this movie 4 or 5 stars – out of 5. Simple storyline, but not boring. An interesting twist and an ending that leaves you with a smile on your face.