Oh, I am so stuck on this movie lately.

I’ve had it on my hard drive for about a year now but never got around to watching it until about two weeks ago. It’s about a police detective who is a spy for gangsters, and a gangster who is a spy for the police. 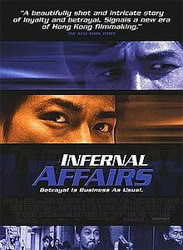 The first few minutes of IA were a little confusing, with the quick cuts and the various characters appearing. But after 20 minutes of it, I’d changed my tune to: This. Is. Awesomeeee! Why have I never seen this before??

That magnificent 15-minute sequence where Hon Sam the triad leader (Eric Tsang) is conducting a transaction with the Thai drug dealers whilst Superintendent Wong (Anthony Wong) and his men closed in on them was really what hooked me. It felt like a million things were happening at the same time – and yet just one. (In a sense it was just one thing – both Hon Sam and SP Wong discover that they have a spy problem.) Excellent cross-cutting. I thought it was set up and edited very well indeed. Or at least well enough to have caught my attention and interest. 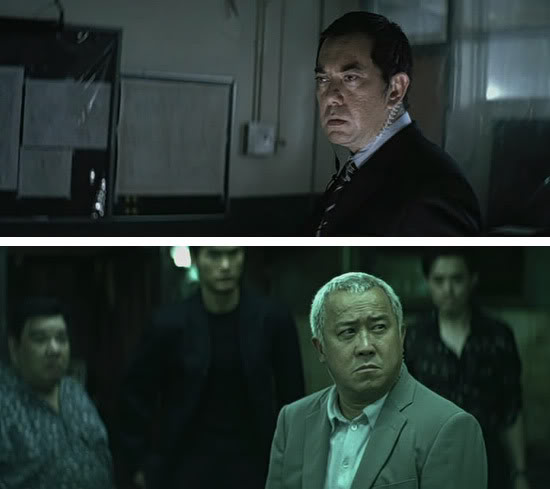 IA had lots of pretty good lines and sequences. The aforementioned 15-minute sequence was one example. I wish I could describe it in more detail, but it’s the type of thing that’s only really effective when you watch it. Another pretty good part was the iconic bit from near the end of the film, when Chan Wing Yan (Tony Leung) calls out Lau Kin Ming (Andy Lau) to the rooftop of a building and confronts him about being Hon Sam’s mole in the police force.

I liked how it went from a close-up shot of both of them to an extreme wide shot right after that line. It was the kind of thing that makes me think: Ooooh, brilliant editing choice! (Especially in retrospect.) It really emphasised the fact that at that point no one except Lau knows Chan is an undercover cop since both SP Wong and Yip, the head of the police academy, who knew the secret are dead and so Chan is pretty much all alone in the world and at the mercy of Lau. Ironically, Lau is at his mercy at that very point, being handcuffed and bereft of weapons.

Hmm, I’m not the best judge of acting ability, but I thought Tony Leung and Andy Lau gave good performances in their roles as Chan Wing Yan and Lau Kin Ming. (LOL. Random aside: Yan and Ming? My sisters’ names. XD ) Tony Leung stood out in particular for me. For instance, Chan’s expression when Hon Sam, suddenly suspicious of him, smashes his injured arm on the table to break the cast around it was full of hurt and pain. It was exactly a look that you might expect from someone loyal who realises the person to whom he is loyal thinks he could be a traitor… and whose arm also now hurts doubly too. Makes one think that wow, this Chan is really good at playing the part of a loyal gang member.

And then when SP Wong dies – the look of shock, horror and disbelief on Chan’s face was heartwrenching. It was the look of someone who not only saw a friend (and possibly father figure) die, but also just saw his future and his hope of getting out of the criminal world vanish. Admittedly, the lead-up to that scene, the sudden draining of ambient sound and the sad melancholic music as well as the editing contributed a lot. But those would have been a lot less effective had Tony Leung been a very wooden sort of actor.

IA wasn’t a perfect movie, but it was pretty close. Perhaps my only real gripe about it was that there was a rather useless and extremely minor sub-plot about Chan and his ex-girlfriend that served no purpose. Those short moments of screentime would have been better used to expand on Chan and his relationship with Dr. Lee (Kelly Chen), his therapist, if they had to use them at all.

Nearly forgot about the ending! I kind of liked how IA ended, even though it wasn’t a “fair” ending as the bad guy gets away and the good guy dies. (Though perhaps it’s a sort of good ending too, since the bad guy gets his chance to turn over a new leaf…)
The film closes with a flashback to a part early in the film where Chan gets kicked out from the police academy and Lau is watching him almost wistfully. It shifts from a black-and-white flashback to full-colour “today”, with the younger Chan and Lau replaced by their older selves. Back then, Lau wished he could change places with Chan and at the end of it, he still wishes he could change places with Chan – but for quite different reasons.

That does rather turn the scales of justice with regards to the end, since it implies that it is worse for Lau to continue to live than itwas for Chan to die. After all, Chan’s identity as an undercover cop was revealed and his name was cleared, whereas Lau has to continue living his life with the guilt of so many dark deeds weighing on him.

I don’t have much to say about the design side of IA. Set design, costumes – there were all appropriate to the place and time. No complaints. Anyway, I don’t have a lot to say about guys in police uniforms and dark suits. haha I thought the music was pretty good though.

Then of course, I just had to see what Hollywood had done with IA. The Departed, directed by Scorsese, actually won the Academy Award in 2006, so with that in addition to hearsay, I figured it couldn’t be very bad… And it wasn’t bad. But it wasn’t anywhere near IA. “Not even close” – to quote my film classmate, Pranav. Terry argues that they’re both different movies and both equally good, but I think that one can’t help comparing when so many things are similar – the basic plot, key scenes, certain lines… How do you not compare?

The main difference between The Departed and IA is that the former expands on the background of the two main characters – Billy Costigan, the “Chan” figure played by Leonardo DiCaprio, and Colin Sullivan, the “Lau” counterpart played by Matt Damon. It spends quite a bit of time following the two through childhood and their academy days. A good idea in theory, but I thought the execution was lacking as it dragged somewhat. It took me 20 minutes to be totally caught up in IA but even after 45 minutes I didn’t feel as intrigued by Departed.

They shifted scenes around and changed some details, such as Chan’s usage of morse code to send messages to SP Wong. That became plain ol’ phone calls in Departed. It detracted a little from the show, since the bit about morse code was a rather cool and impressive aspect of the IA story in my opinion. The transaction sequence which so captivated me in IA was moved to the second half of Departed, was reduced to a mere 7 minutes, and instead of it being a drug deal with Thais, it was an illegal exchange of microprocessors with some shady characters from China (or was it Taiwan? I forgot), including a nervous-looking government official. And Frank Costello (Jack Nicholson) is hostile and sneaky when dealing with his Chinese ‘partners’ whilst Hon Sam treated the two Thais in a most friendly manner. Anyway, that sequence held no appeal for me in Departed. A far, far cry from the awesome-ness of it in IA.

I felt Billy Costigan and Colin Sullivan were a little young to be believeable in the roles they had to play. Why did Costello trust Billy so quickly? Can such a young officer as Colin Sullivan be trusted with an investigation looking into potential traitors? At least Tony Leung and Andy Lau were older and looked more like they would have really spent years and years working their way up the ranks.

I didn’t like the silly love triangle between Sullivan, Dr. Madolyn Madden and Billy. I wouldn’t have minded that their paths all crossed, but it felt contrived when the Billy/Madolyn relationship started to grow – and she was already engaged to Sullivan at that point…?? I found myself thinking: Oh please, Hollywood. You just had to do that, didn’t you?

Oh, also, I did not see the point of Sgt. Dignam (Mark Wahlberg). His main purpose appeared to be sitting around with Captain Queenan (Martin Sheen) and spewing foul language at everyone. I don’t expect him to talk like Mr. Darcy, but it really did feel a bit much. And the character isn’t even remotely likeable. He doesn’t do anything that made me feel anything but irritation. Then when Queenan is killed, he loses his temper completely and gets suspended and… basically disappears until the veeeery end when he suddenly reappears in Sullivan’s house to kill him. What on earth was Dignam doing the whole time in between? Why didn’t he even try to get in touch with Billy? Plot hole, methinks.

Departed had a more “Western” ending, I guess, as Sullivan is killed by Dignam. I talked over IA and Departed a little with Nadia and Azman last weekend and we all think IA’s ending was better. But then, it’s very likely that Western audiences just would not have understood that bit about “Continuous Hell.” That sort of thing goes down better with Asians, perhaps, who are more accustomed to Buddhist – or any other religious – beliefs.

The Departed tried, and it wasn’t too bad, but it suffered from all the typical Hollywood excesses – lots of violence (the amount of violence was startling, compared to IA), vulgar language (seriously, did Dignam have to swear so much? The rest too), and the obligatory romantic side story and sex.
IA handled it all with a great deal more class and subtlety. You didn’t have to see Hon Sam’s men go around killing people in cold blood endlessly to know that you don’t mess with them. A few well-chosen scenes, clever editing – that does the job. The not-meant-to-be relationship between Chan and Dr. Lee felt sadder and more poignant because they never had the chance to really have a relationship.

I think I could quite easily go through the films and compare them in every detail but that’s not necessary at the moment. hahah. Ask me yourself if you want to hear me babble about it. But for now, last words.

Overall, my verdict of Infernal Affairs and The Departed was: IA wins, hands down.