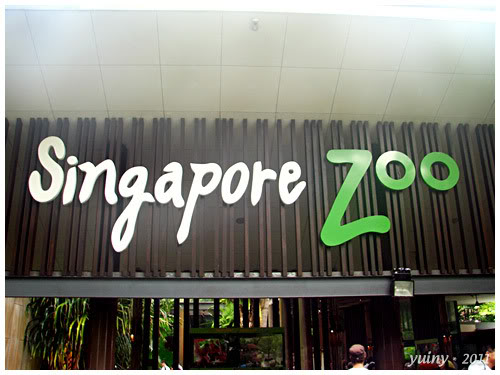 I think Vinly’s right – this may well be one of the best zoos around (very likely the best in Southeast Asia). 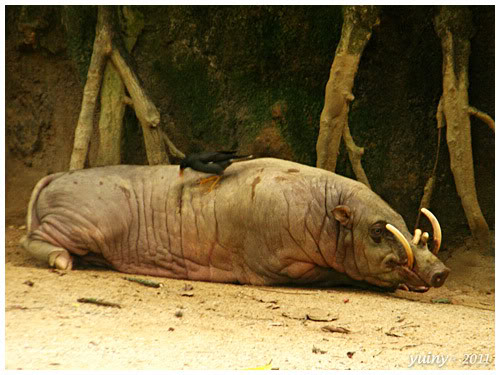 This is a babirusa. (Pig- deer?) I had no idea there was such a thing and at first glance I thought it was a warthog. But the shape didn’t look right. And a closer look showed me that the tusks were all wrong for a warthog. Then I saw a signboard that said this was a babirusa and that the babirusa is often mistaken for a warthog. haha 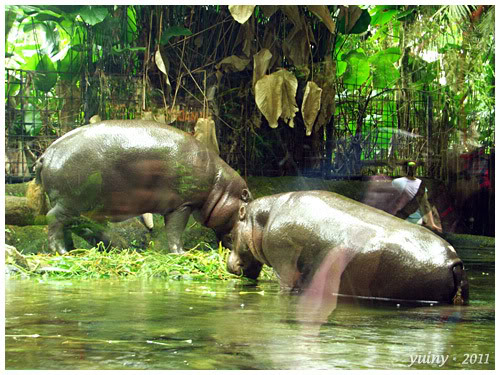 Pygmy hippos! You can just barely see the third one hiding underwater – the grey blob in the water on the right, just by the other hippo’s backside – whilst the other two had lunch. 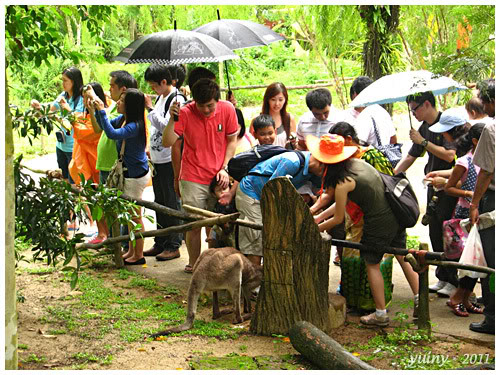 The friendly kangaroo was spoilt silly by all the visitors trying to feed it, I think. And yes, it rained while we were there. I so regretted not bringing a hat or an umbrella. 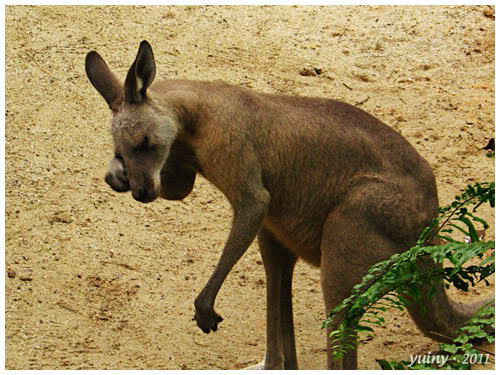 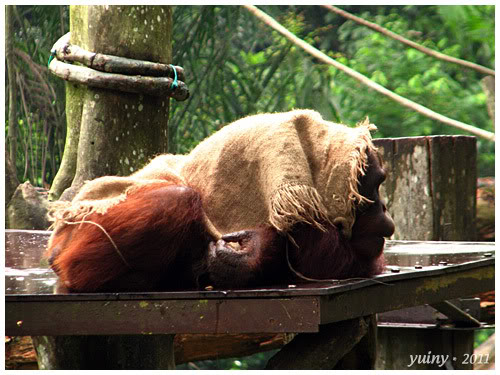 The orangutans in the Singapore Zoo roam free in the trees. Kind of interesting, really, to see them wandering about above your head in the orangutan zone. This one here was huddled under what is either a brown blanket or a gunny sack converted to a blanket. Presumably he (she?) was trying not to get too drenched by the rain. 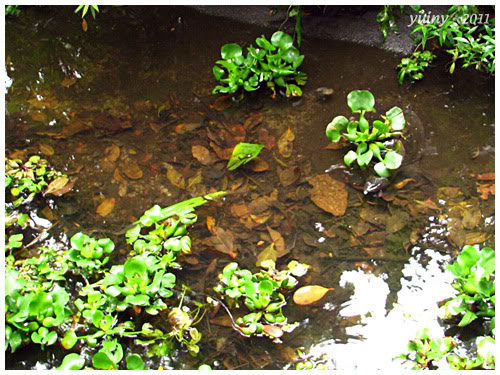 Can you spot the turtle? 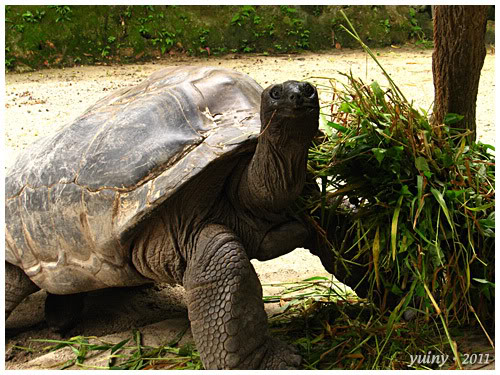 One of the giant aldabra tortoises. A kid asked the keeper – we arrived just as it was feeding time, so the keepers were around – how old it was and he said it’s about 70 to 80 years old. It’s really huge… And Anna said to me, “He likes you.” Because this tortoise was just about the only animal in the entire zoo that lifted its head and obligingly stared at my camera lens. Well, at least somebody does. hahah 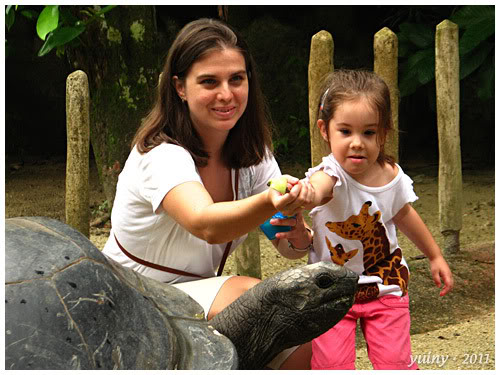 Pay SGD5 and you get to feed the giant tortoises. This little girl was so scared. hahah 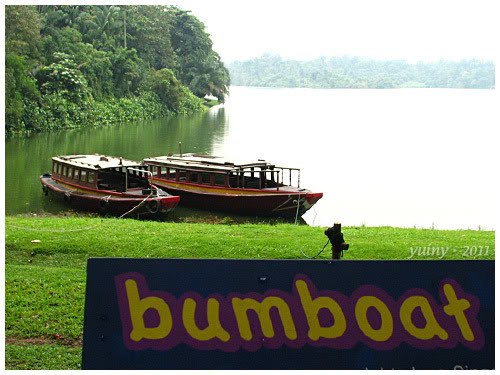 The zoo is built on a little sort of cape that’s surrounded by a lake. You can take a cruise round from one end of the zoo to the other. Not on these bumboats, though. Bumboat, what a name. haha 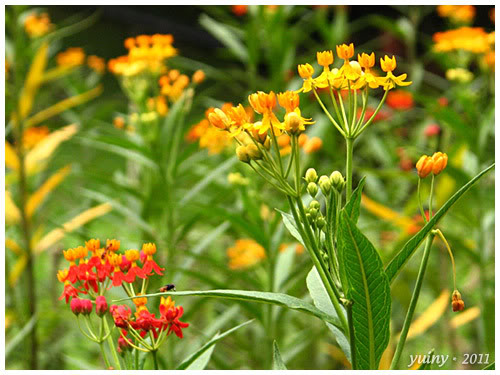 There were several different types, but most of them were snoozing. Darn it. I suppose rainy weather makes bunnies sleepy too. 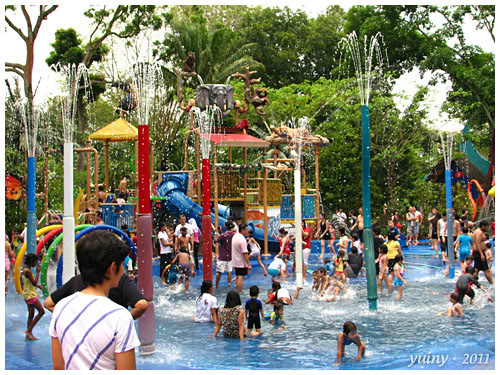 In the Kids’ Zone, there’s an area for people to just go splash around and have some fun in the water – good for cooling off too, no doubt. 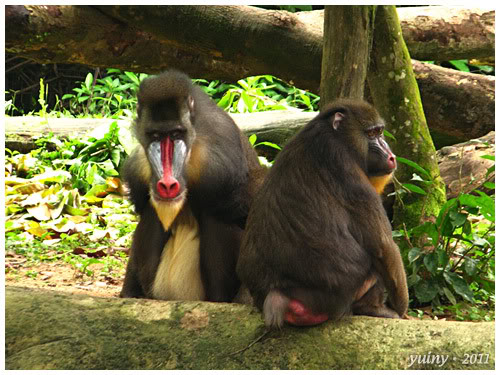 Our reaction to the mandrills was: “Rafiki, is that you?!” (Especially since we were to see The Lion King that same night. hah) 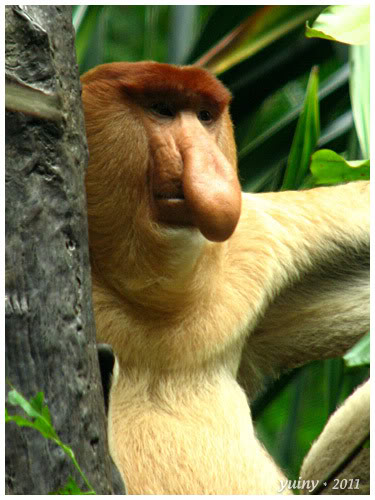 Hmm… spotted stingrays that were kind of in the middle of nowhere. There was a pond with ducks right next to this section. I hope the ducks never swam in this one by mistake. 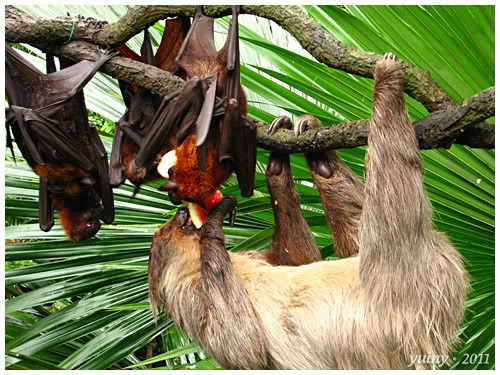 Fruit bats (a.k.a. flying foxes) and what I think is a sloth fighting over some fruit. 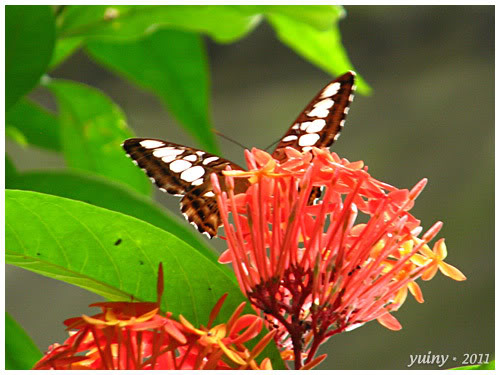 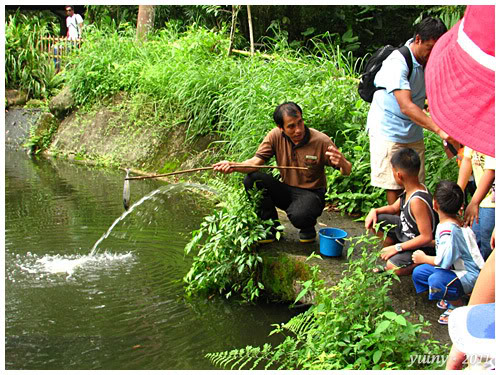 Arapaima feeding time. They really do have some rather large arapaima in that moat. It’s just that you can’t easily find them because the moat is big and presumably quite deep (has to be, to accomodate fish of that size). So we made sure to drop by at feeding time. Managed to glimpse the fish – huuuge. Black bodies, with red-rimmed scales. 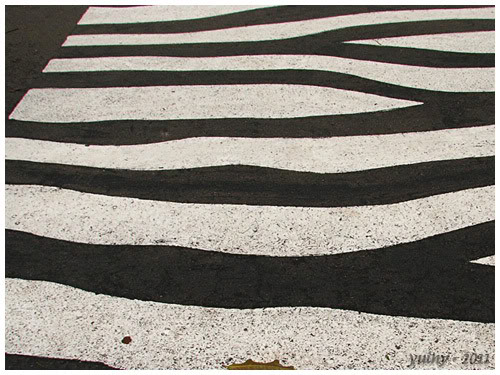 A zebra crossing! hahah I liked how they did the stripes. 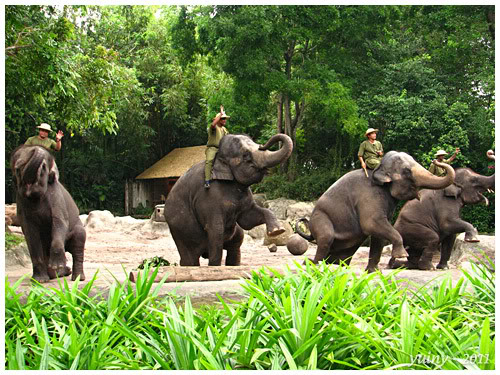 There was an elephant show too. Kind of amusing.

Oh, and there was a monitor lizard living in a clump of trees in the elephant enclosure. Before the elephant show began, it came out, made its way into the moat and caught itself a fish to eat. The tail looked like it’d been cut off or something. Anna suggested that maybe an elephant stepped on it once. Ouch. 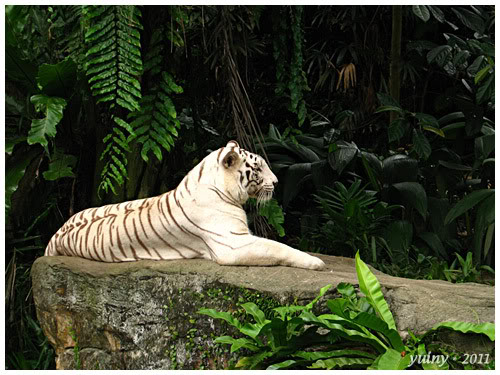 A gorgeous white tiger. The colour shows up so well against the greens of the plants.

We didn’t manage to see everything – kind of rushed through the snake section, and completely ignored the African animals. We could have seen the African section if we hadn’t gone to see the elephant show, but oh well. Next time!!