On Day 2 we went to Macau. Didn’t do much, just meandered around The Venetian Hotel and poked our noses in the oddly-named Galaxy Hotel. (Odd because the hotel’s decor concept didn’t match the name at all.) Part of the Venetian. Done up quite nicely, that one was. 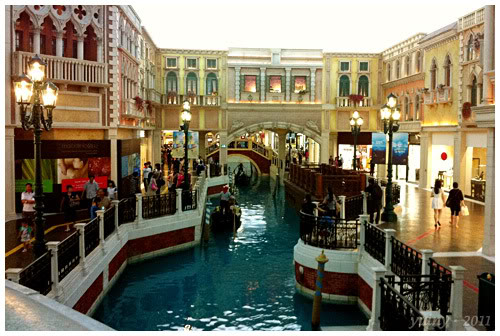 Further inside the Venetian, they recreated the Venetian canal look, complete with gondolas and gondoliers that sing. Pretty good too. And at least one of the guys were quite good-looking. hahahhahah 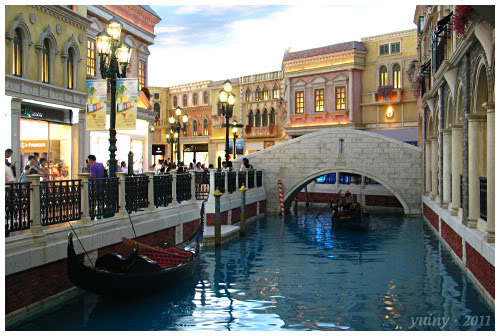 Another pic of the Venetian.

Well, all my other pics looked pretty much the same and I got no really nice or interesting ones from Galaxy so that’s the end. On to Day 3…

Took a cable car to Ngong Ping 360 – some place up in the hills on Lantau Island that had a short road with shops built to resemble old China, and a Buddhist temple with a huge statue of Buddha on the hill.

The cable car ride was fairly long. Took about 20 minutes, maybe? Up and over one hill, across the lagoon, over another hill, and another, and then Ngong Ping 360. 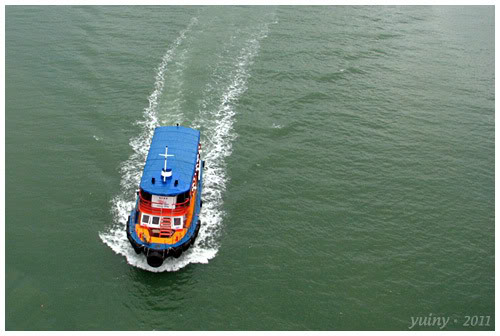 Boat passing by under the cable car. Nice bright colours! 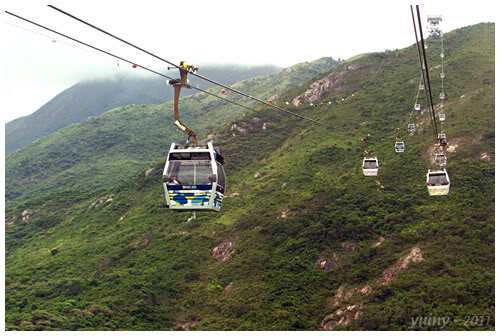 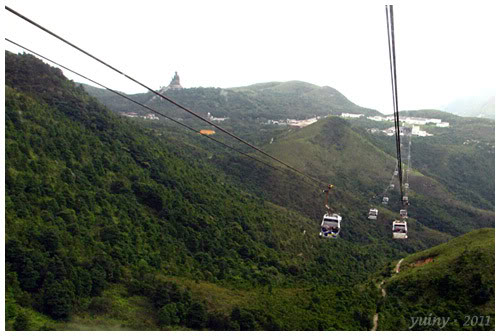 See that little triangularish blob sticking up from the farthest hill? That’s the statue. It’s big. 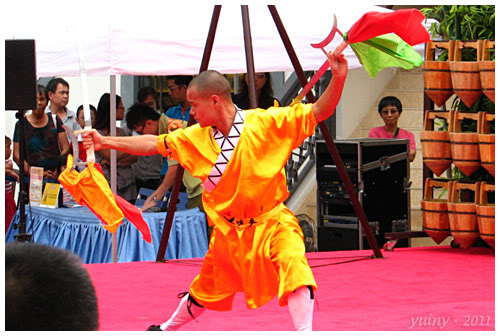 There was a shaolin kungfu performance that began just as we arrived. Nice timing! 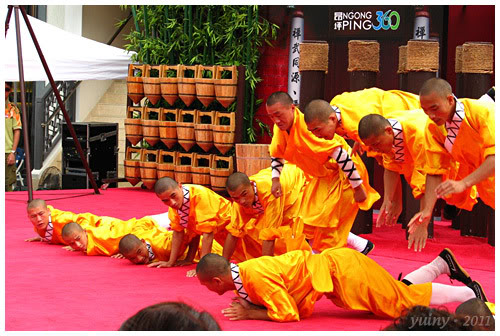 I looove this picture. haha 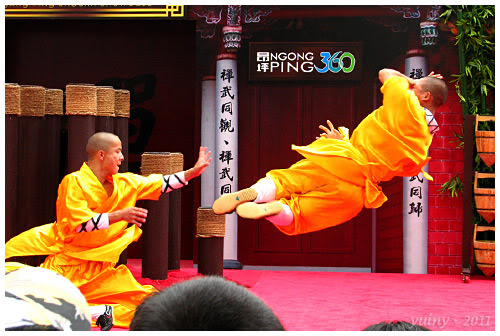 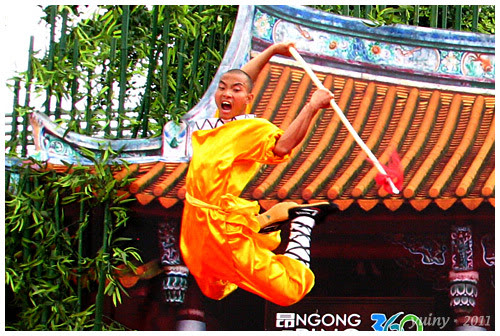 Actually, this pic is kinda cool too… (But it’s actually just one part of a bigger picture. I didn’t like the rest of it so much and cropped it out. haha) 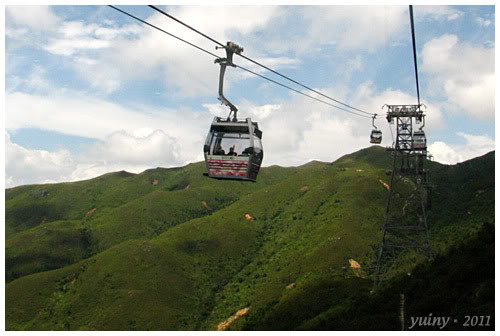 Going back from Ngong Ping… I liked it best whenever the cable car went downwards – felt a teensy bit like a slow-motion rollercoaster. fun! 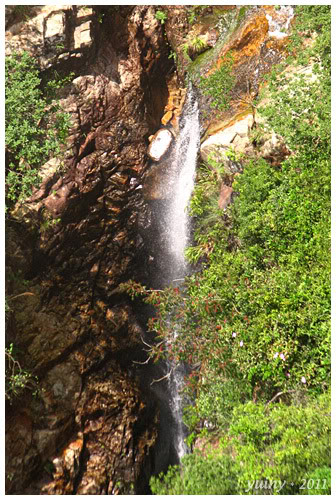 We passed several waterfalls going to and from Ngong Ping. So pretty~ 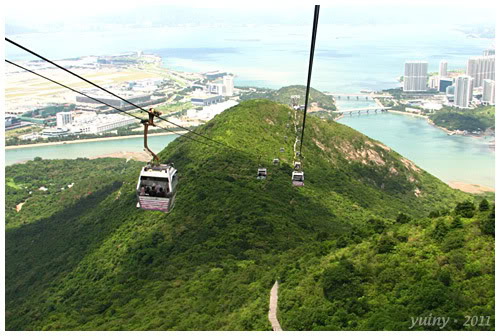 Beyond the hill and the lagoon, in the over-exposed left part of this image, you see the Hong Kong airport. 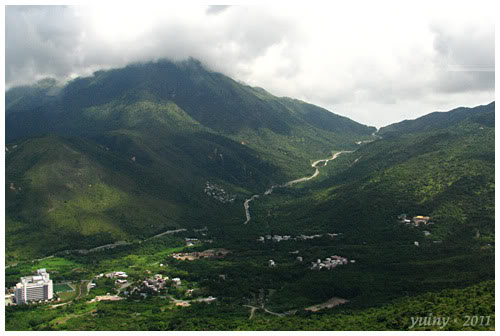 Valley and hills near the lagoon/bay/whatever-you-call-it. 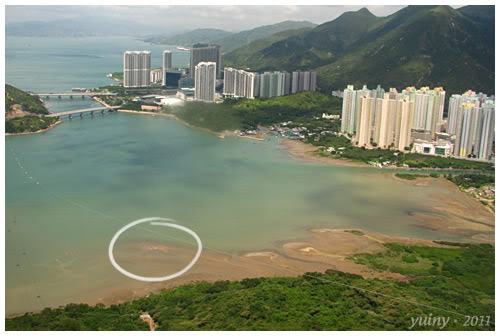 See that brown patch I circled? 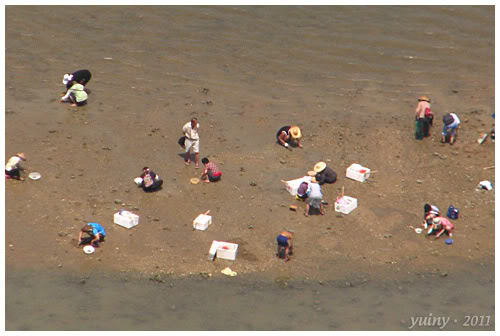 There were people down there… presumably digging for clams?

Went up to Sky100, the 100th floor of the ICC tower, which is basically an observation deck that lets you see the whole of the city. Not much of a view to me, since I find HK’s architecture bland – lots of concrete apartment blocks and glass office towers. Two of my favourite pictures from there were of the sea rather than the city. 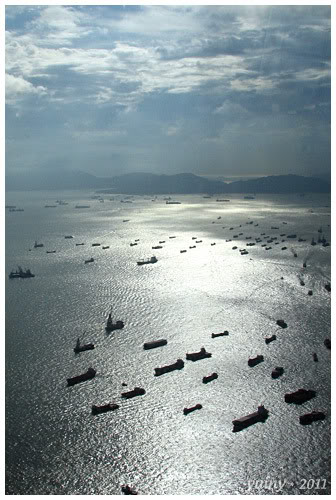 Like this one, which rather makes the cargo boats look a little like military aircrraft carriers in silhouette. 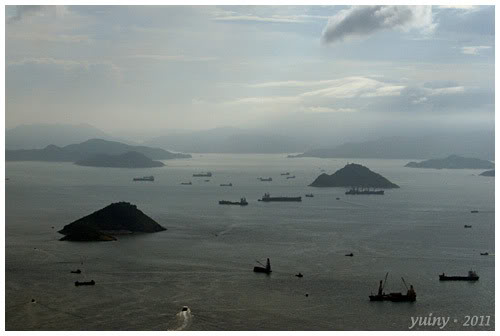 And this one with the little islets scattered around and getting fainter as the distance increases. 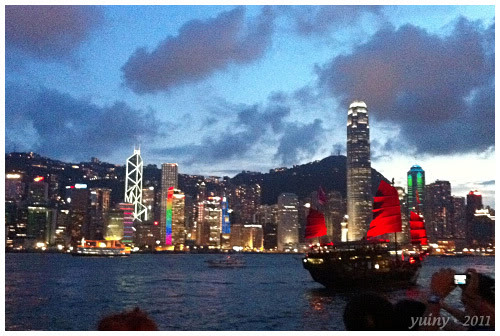 Went down to the Avenue of Stars again that night to catch the Symphony of Lights (which, by the way, is a waste of time). A junk sailed by… 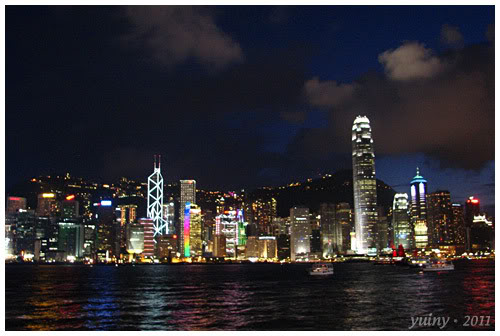 I got one somewhat nice photo out of it, at least? 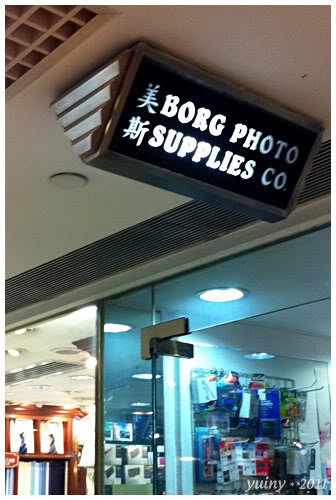 When I saw this somewhere in the underground mall beneath Sheraton, my first thought was: “HAHAHA I have to tell Terry/Jia Wern/Journey!! The Borg do photography and their supplier is in HK! Ahahahahaha”