So, at last the movie I’ve been anticipating since the middle of the year (and the first one I mentioned in this post) is out.

Overall verdict: Pretty good; quite worth a watch.

Now for the long-winded babbling. Be warned for spoilers, so stop reading here if you don’t want to know what happens in the show yet.

Story. It was excellent the first two-thirds of the movie. But in the final third, it fell into cliché and the ending rather spoilt it for me. I loved how the movie opened: with the oh-so-classic Disney-style storybook (complete with Old English lettering on the cover) flipping open to reveal the story, and a narrator beginning to tell the story. They did insert a different twist there with pop-up images appearing when the book opened instead of seeing an illustration with the text below it. Fortunately that didn’t detract from anything.

It was interesting to see how Giselle’s (Amy Adams) naivete affects her in our world – I mean, she talks to a castle facade, thinking it’s a real castle. She thinks a passing midget is Grumpy the dwarf, and when asked what she means by having a “place to lay her head” for the night, she replies that something along the lines of a meadow or a hollow tree to curl up in would be nice.

The sequence where she calls the animals to help her clean Robert’s (Patrick Dempsey) apartment is… Priceless. The audience’s reaction is really funny. When she first opens the window and sings a few notes, everyone starts chuckling or giggling. Then when she’s surrounded by rats, flies and pigeons waiting attentively for orders, everyone’s laughing. But when cockroaches swarm out of the bathtub drain – everyone literally recoils and there’s an audible “ewwww” mixed with laughter in the cinema.

I liked that Giselle was so confident that Prince Edward (James Marsden) would come for her, despite Robert’s opinion that he wouldn’t come. But I thought it was extremely sad that Giselle stopped singing – just when Edward found her too. And that, I believe, was the point where the show started to go downhill a little for me. It lost something when Giselle became “aware” and not so naive. It felt like some of the ‘magic’ and charm of the show disappeared. =(

Seeing how reluctant Giselle was to go back to Andalasia, it was obvious that she would end up with Robert (to my dismay.) When Nancy, Robert’s girlfriend, commented that Edward was so romantic to Giselle, it was practically a given that Edward and Giselle were going to get together. A voice in my head cried out: Argh, CLICHE!
(Yes, I wanted Giselle to end up with Edward.)

I felt like Queen Narissa’s (Susan Sarandon) part at the end was too rushed and a little bit too contrived, although probably they were going for a parody of Sleeping Beauty (more on that later in this post). The bumbling Nathaniel (Timothy Spall) reminded me so much of Peter Pettigrew from the Harry Potter & the Prisoner of Azkaban movie that I’m pretty sure it’s the same guy.

Mostly, I didn’t like how there was a kind of almost cynical feel to the ending, with Giselle becoming a “real” normal woman that had nothing particularly exciting about her other than her bubbly personality and talent for dressmaking. (Hm. Suddenly that sounds Pinocchio-like, but without the happy feeling about become a “real person.”) It was a pity the movie took such a direction, in my opinion.

Oh, and another thing. I thought Robert was rather hypocritical. After going through most of the show telling her that there’s no such thing as love at first sight, and that it takes time to build a relationship, what does he do? He dumps his girlfriend of five years for someone he’s known only about three days. Sheesh. Call me what you like, but I simply didn’t like that. I felt so sorry for Edward and Nancy when they realised that there was something going on between Giselle and Robert.

In a nutshell, I think the movie was fairly good, but could have been better with a less clichéd ending.

Characters. Giselle was an interesting character up till the point where she became “aware.” Robert was… Typical. No comment. Edward – now there’s an amusing character. He’s clearly something of a narcissist, and yet he seems inherently good at heart. “Thank you for taking care of my bride, peasants.” LOL. (I can’t think of any better comparison than Suou Tamaki of the Ouran anime – Angie, Jo, Lyd, Jan and the others would understand. *wink* )

But one of the best characters in the whole show was surely Pip the chipmunk. (Great job by the 3D animators on animating the “real-life” version of Pip!) He was cute, funny and entertaining – like when he realised he couldn’t speak in our world and had to resort to squeaking and miming the whole way. Oh, that was hilarious!

Music. Love it. Alan Menken and Stephen Schwartz definitely deliver here. I wish there had been more songs in the movie!

Despite the ending, I liked the movie enough to draw the two fairytale characters. (I’m not exactly pleased with how Edward turned out in the pic, but then I don’t really have a good track record drawing guys anyway…) 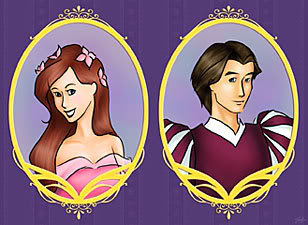 Trivia. This show is full of little bits of Disney trivia. The good thing is that it doesn’t affect the story very much so you can watch it and not feel anything if you miss the little details. It’s just a lot of fun for Disney fans like me.

Let me give you some examples. The Bella Notte restaurant – where Giselle has dinner with Robert and his daughter – is named for the famous song in Lady & the Tramp, where the two dogs have a romantic meal of spaghetti and meatballs. Robert’s full name is Robert Philip (I didn’t discover this until I looked at the cast list in IMDb), and the name of the prince in Sleeping Beauty is Philip. Robert’s girlfriend’s name is Nancy Tremaine. Cinderella’s stepmother was called Lady Tremaine, if I remember rightly.

Other references are quite obvious (well, maybe not all…)

Found even more trivia here and here and here… And also here on Wikipedia!
Some of them are really – hard. Hahah… You’d have to watch really really carefully and scour the cast and crew credits properly to figure it all out (which obviously I didn’t). I had a lot of “Hmm, that looks familiar” moments, but couldn’t catch all the little homages and parodies. Here’s some of the more interesting ones:

You know, I could go on and on commenting about all the little bits and pieces, but I shan’t so as not to bore you, since you’ve been so kind to read this far.