Christmas week was… Interesting, to say the least. Or rather, the week leading up to Christmas was.

Christmas bells are everywhere, but it’s almost like wedding bells are haunting me too. (Not my wedding bells, okay! Definitely not mine!) I’ve heard of three engagements this year, attended one cousin’s wedding, heard of another 3 weddings in January (another cousin’s wedding, and two from church)… And two – no, three – single friends are single no more. *feels old*

Anyway, Christmas was quite fun – except for a few glitches. It’ll be a new year in a week! Hm… I hope I have time to write a “reflection” post for 2007. 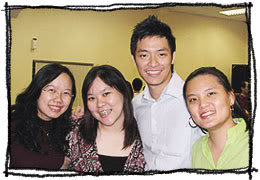