I don’t think I’ve ever seen more than one local film production in cinemas in a year (because I totally ignore all those silly pontianak movies and whatnot). This year, I’ve seen two. That’s new. haha 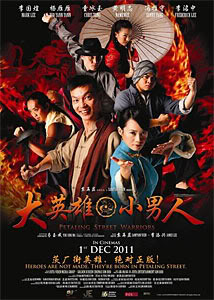 I prefer to spend more time spewing my two cents’ worth of opinion about the movie than summarising the movie itself, so here is GSC’s synopsis:

Set in Petaling Street in 1908, it tells of a hokkien mee seller (Mark Lee) who finds himself entangled in deadly battles with skilled fighters. Little did he know that he is in possession of a lost treasure map linked to the Qing Dynasty and must refrain himself from consummating his marriage to master the “Virgin Kung Fu” skills to overcome his opponents.

Here, have a trailer to start with too:

Petaling Street Warriors, directed by James Lee (The Beautiful Washing Machine) and Sampson Yuen (one of the producers of Ah Long Pte Ltd), is basically a kungfu comedy. It imitates – or parodies? – the style of Stephen Chow in having a rather predictable plot, some zany things that don’t really make sense and a fair bit of kungfu. I hadn’t seen the trailer before seeing the film, and I went to see it purely based on the synopsis and so had no real expectations of it beyond that it would be funny. And funny it was.

It was also rather better than I expected it to be. It isn’t a masterpiece, and it’s certainly no Shaolin Soccer. But it is entertaining. The production quality is good and since it isn’t the first local production this year that has good production values (Ice Kacang Puppy Love and Nasi Lemak 2.0 being the other two), I think it shows that our local film industry is at least gradually improving in the technical aspects – though the post-production work was done in Hong Kong.

Similar to Namewee’s Nasi Lemak 2.0, Petaling Street Warriors pokes fun at local sociopolitical issues, but it does so less frequently and in more subtle ways. Yes, there are direct quotes and references that point straight at the target (e.g. “he looks like me, but he’s not me”) but they are not the centrepoint of the show. Nasi Lemak 2.0 was a mishmash of crazy jokes and jabs at current issues, with the overarching message being that we should all be united as “1Malaysia”. The story itself was merely the framework for the laughs and a way for cramming everything in. Petaling Street is more concentrated on being a local version of Hong Kong kungfu comedies – the cracks at local politics are just in there for the heck of it and they don’t dominate the story (though they are pretty obvious to any up-to-date Malaysian; you can’t miss them).

There was a fair amount of bawdy jokes, though not quite as much as there was in Nasi Lemak 2.0. I daresay there were more than I realised but I think that here is where I, as one who understands extremely minimal Mandarin, benefit because any subtler jokes in the dialogue that are translated differently (more innocently) just sail right over my head. Ignorance is bliss. haha

The fight sequences were quite well done, especially considering that the actors don’t have strong backgrounds in martial arts. The fight choreographer, Ma Yuk-sing, is from Hong Kong though.But really, not half bad, those fights. I just think that the editing could have been better. It felt as though they hadn’t figured out how to plan or cut the scenes in such a way that it’s fast-paced but not confusing. A few of those were rather a mess, and detracted a little bit from the enjoyment of the fight choreography.

Sun Yat-sen and Japanese ninjas make appearances in the film, and whilst I can accept the passing inclusion of Sun Yat-sen, the Japanese ninjas seemed a bit… out of place. I guess it makes sense (sorta) that they were there to assist the Japanese agent, Xiaoju (Chris Tong), who’s trying to gain the treasure map as well, but it still felt a bit odd. Chris Tong’s character and the ninjas have a short exchange in Japanese which sounded pretty fluent to me. That was good. What was not so good was the fact that the dubbing was very obvious in the close-up shots. You could see quite clearly that the movements of her lips did not quite match the words. A minor thing, but that sort of thing bugs me. Thankfully, there was only that one small scene and no more. (And if it wasn’t a dub, then someone really messed up with the audio and video synchronisation…)

Performance-wise, I think Mark Lee did quite well as Shi Duyao. The rest of the cast were okay, but I felt that Frederick Lee, who played the evil eunuch, was particularly outstanding. Maybe that’s due to the voice he was using – there was quite a disconnect between the looks and the voice, which was rather hilarious. I’m not sure if that was him using a falsetto or if they dubbed someone else. I’m inclined to think it’s the former though. If it was a dubbed voice, it would have been more obvious, as with Chris Tong’s dubbed Japanese voice. According to the Wikipedia entry for this movie, Chapman To was offered the role of Liu Kun, but clashing dates meant that Namewee ended up taking that role. Namewee did fairly well for a rookie actor in playing the role of someone with a short tongue, but I can’t help wondering how different it would have been if Chapman To had done the role instead.

The ending of the climactic fight sequence was rather too much on the silly side, with Mark Lee getting er, divine help, and then taking on different famous kungfu personas (Ip Man, Wong Fei Hung and Bruce Lee) in his fight with the eunuch but… it was so funny. I really think there are few tunes less famous to a Malaysian/Singaporean audience than the theme to Wong Fei Hung. It is a cue that instantly makes anyone laugh or at least grin because you know something related is coming up.

Speaking of music, I thought the soundtrack for Petaling Street Warriors was actually kind of nice. Unfortunately, my musical memory is kind of limited so I can’t recall anything specific now. I just remember that I liked it.

Conclusion: Not something that will sweep international film festival awards, but is probably more watchable for a foreign audience than Nasi Lemak 2.0. A fun watch, especially if you like Stephen Chow’s stuff. (It’s not on par with his, but hey, it’s a start for the local industry in that direction.)