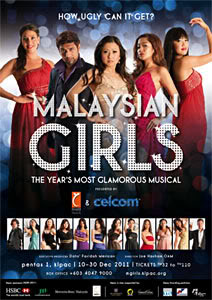 It feel a little pointless to review a show after its run is over but oh well.

Anna, Wei-ling and I managed to catch the last showing of Malaysian Girls at PenangPAC today. Synopsis from the page at the KLPAC website:

The musical pits two camps against each other. On one side you have Serenity Billion – the person who started the Malaysian Girls pageant to seek and define a uniquely Malaysian ideal of beauty. On the other side you have the flashy Ray Sanjay and the go-getting Jasmin Hibiscus who have bigger and bolder ideas. Just how ugly can it get?

Malaysian Girls was quite a decent effort, although as far as local productions go I prefer Broadway Parodies and its sequel. (Unfortunately, I never got to see the Lat musical or Secret Life of Nora, both of which were much larger scale productions and I’ve heard particularly good things of the former.)

The cast was decent, though the 11 girls under Serenity Billion’s (Tabitha Kong) guidance had rather inconsistent accents throughout the show.  I’ve seen Tabitha Kong in SIBKL’s Drunk Before Dawn and also in Broadway Parodies Lagi Lah! and I have to say I think she was more impressive in those two shows compared to this one. But out of the whole cast I found Siti Farrah Abdullah, who played Jasmin Hibiscus, the most fun to watch. Good comic timing, and she carried the role of the scheming Jasmin quite well. There were only three men in the cast and though they were funny (especially the two flunkies, played by Freddy Tan and Alvin Looi) I think they were underused, although it almost can’t be helped in a story that’s about girls in beauty pageants.

I thought the singing was generally good, though not amazing. Dancing was on an “okay” level – some of them are clearly better dancers than the others. They all did very well in the Jai Ho sequence though.

There were several funny bits, mostly from Jasmin Hibiscus and the scenes where the girls were rehearsing for the different segments in beauty contests. The one that sticks in my mind is the girl who said poetry is her talent and proceeded to recite a poem:

My name is
Miss Lim
I go to
The gym
So I can
Keep trim
And I also
Swim.

I don’t know why, but I find that really hilarious. Perhaps it was the serious delivery that made it funny…

Rather typically, there were quite a number of jokes about race and such. Perhaps it’s inescapable since that’s a big issue here these days, being tied to politics and whatnot, but I personally find that it’s getting a little bit boring. Or maybe that’s just because I watched Nasi Lemak 2.0 last year, which was quite heavy on all those current issues. I guess it’s not a bad thing – those are jokes that most Malaysians will pick up on quite easily.

Some of the songs seemed to come out of nowhere and didn’t quite make sense (especially Gucci Lim’s (Freddy Tan) song and Lin Lin’s (Anrie Too) solos towards the end of the first half). Not that they were bad or badly sung. They just didn’t contribute to the plot. Wei-Ling pointed out that had they introduced Lin Lin’s backstory earlier, her solos would have made sense, but as we didn’t know her backstory until near the end of the whole thing, those songs just ended up being rather weird.

The potential romantic setup between Serenity and Ray felt forced and all three of us were really relieved that they didn’t try to push it further at the end, instead just leaving it at a “maybe they could get together” sort of thing. Good thing they didn’t try to put that in the limelight – the plot wasn’t constructed to support a proper romance.

I think the biggest mistake in Malaysian Girls was the slow, serious beginning. As Anna and Wei-ling both noted, starting slow is fine but it has to be really really good and also really impressive. If it’s not, then your attention begins to drift – “hmm, that one’s out of step with the others”, “that guy missed a note there”, “why is the set so plain”, “huh, that costume is funny” and so on. It would have been better had the show started with an upbeat number, since that would have drawn the audience in much quicker.

Also, I must have my say about the costumes. (You know me. haha) I have no problem with simple costumes. After all, this is a show set in current times and they’re all modern characters. No need for elaborate period costumes or anything. But… I find it problematic when the main character is nearly always in clothes that prohibit movement – very close-fitting dresses or pencil skirts – and she has to sit down and stand up quite often. I don’t think it was at all easy for Tabitha to perform in some of those outfits (even though the red dress and the blue-green one were really pretty).

I’ve griped quite a bit there, but it’s a decent show nevertheless. Wei-ling asked if we would recommend the show to other friends and I think Anna summed it up best: Yes, we’d recommend it to others. Not necessarily for the musical aspects, but certainly for the comedy. The story is simple enough to understand, the songs are okay, most locals would catch and appreciate the jokes, and the cast puts up an enjoyable performance.

Not bad at all. I’m just glad at least the local theatre scene is trying to do stuff. They’re progressing. Practice makes perfect!