Recently I’ve been listening to lots of songs from various musicals (both stage and screen) on Youtube. Just in the mood for it, that’s all. Maybe one of these days maybe I’ll write about how wonderfully engrossing I find musicals. Anyway, whilst hopping from song to song, I came across songs from Rodgers & Hammerstein’s Flower Drum Song and I thought, “Ah, I’ve not watched that one yet.” So I watched it. 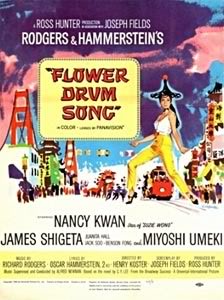 Flower Drum Song is a story of Chinese immigrants in the USA and, for that time (it was released in 1961), was a rare case of having a cast that was nearly entirely Asian. (Though that’s still a rarity today in terms of Hollywood films.)

Sammy Fong (Jack Soo) is the owner of a night club in San Francisco, and his mother has made arrangements for him to marry a girl from China named Mei Li (Miyoshi Umeki). But Sammy already has a girlfriend – Linda Low (Nancy Kwan), the star of his night club’s shows. He tried to solve the problem by recommending Mei Li to Master Wang (Patrick Adiarte) as a bride for Master Wang’s son, Wang Ta (James Shigeta). Unbeknownst to Sammy, Ta has met Linda and is smitten with her. Linda twists Ta round her finger and gets him to propose to her, partly as a way to force Sammy’s hand and partly from desire to have a more stable life. This complication upsets everyone – Ta’s family, Sammy, Mei Li – and drives the rest of the story to its rather expected ending.

I have to say that I wasn’t particularly impressed by the film. There was something lacking in it – it didn’t have the same exuberance or fun that The King and I  or Sound of Music had. (I might like it a teensy bit better than Carousel though. Carousel was rather depressing.) It’s not entirely the fault of Rodgers and Hammerstein, even if it wasn’t their best work. Some of the songs are still nice – I particularly liked “Love, Look Away”, “I Enjoy Being a Girl” and “Grant Avenue.” “Chop Suey” was a cute piece too. It’s just that somehow the movie was missing a certain spark. Can’t put my finger on exactly it is that was missing in Flower Drum Song.

Some other thoughts in brief:

* Rodgers and Hammerstein created 11 musicals between them (if Wikipedia is right) and eight of them were turned into movies, including Cinderella, which was created for television first instead of the stage. The other seven are Oklahoma!, Carousel, State Fair, South Pacific, The King and I, Flower Drum Song and The Sound of Music. Out of those eight, I now only have one more left to watch, which is State Fair. I should get to that soon and complete the set. haha