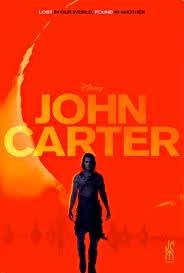 Those directors who are associated with Pixar have some sort of magic touch that seems to make it impossible for them to make bad movies (so far). Andrew Stanton, who directed my #1 favourite Pixar film, Finding Nemo, and WALL-E, scores another hit with the adaptation of Edgar Rice Burroughs’ novel, A Princess of Mars. When I heard this movie was coming out, I made sure to read the book first. I have to say that I wasn’t too impressed with the book, which decreased my interest a little. But, as a result, this is one of those rarities where I like the movie better than the book.

The title character, John Carter (Taylor Kitsch), is a Confederate soldier who stumbles upon a cave of gold and gets more than he bargained for when he finds himself transported to Barsoom (known to us as Mars). It takes a while for him to figure out where he is, and in that time he meets the Tharks – a warrior tribe with green skin and four arms; becomes an ally of their leader, Tars Tarkas (Willem Dafoe); and saves the princess of Helium, Dejah Thoris (Lynn Collins). John Carter only wants to quit fighting and to go home to his cave of gold, but finds that both Tars Tarkas and Dejah Thoris want him to help them fight wars – Tars Tarkas wants his help in battling some other people on Barsoom; and Dejah Thoris wants him to help Helium fight Zodanga, whose leader, Sab Than (Dominic West), wants to marry her and possesses a deadly power that could eventually lead to his dominion over the entire planet. Unbeknownst to them all, Sab Than’s power comes from Matai Shang (Mark Strong, playing yet another villain), the leader of the Therns (who remind me a little bit of the Q in Star Trek, only more insidious). John Carter’s services are so much in demand because due to the gravitational differences between Barsoom and Earth, he finds himself able to leap incredible distances and heights and is stronger on Barsoom than he was on Earth.

Not being particularly attached to the book (and not remembering a lot of the details) means that I can’t really say much about any changes. The Therns don’t show up at all in A Princess of Mars but a check on Wikipedia shows that they turn up in a later book (Burroughs wrote 11 books in this Barsoom series, apparently) so I suppose that they were included to provide a stronger villain. On the whole, whatever changes they’ve made seem to have been for the better. It was just a pity that in the necessary alteration and compression of the story, the Tharks characters and storyline was largely reduced. I have some recollection of John Carter’s interactions with the Tharks being more substantial than what was shown in the film.

I do think that John Carter himself (I can’t seem to just say “John” or “Carter” – must always be “John Carter”; haha) is a little bit hard to like. He isn’t mean or horrible – he’s rather surly at the start but it becomes understandable later when you find out his sad backstory. But he’s just… Not very charismatic? I don’t know if that’s a character issue or an actor issue. I found myself more intrigued by his surrounding characters. Dejah Thoris is kinda cool – let’s save the discussion on that character for a paragraph of its own. That big “dog” Woola – I want one now. He’s not a pretty sight, but gosh, his mannerisms make him so adorable. Runs like the wind too. He made everyone chuckle quite a bit during the show. Kantos Kan (James Purefoy) was a character that hardly appeared in the movie (though he had a somewhat larger role in the book), but I liked him. He was amusing. The Thark Sarkoja (Polly Walker) was under-developed too – yes, she’s supposed to be horrid but in the book that cruelty and her dislike of Sola is more fleshed out whereas here I felt she came across more as a more extreme “bitch” type. Still, I understand that you can’t expand on every single character – books can do that, films can’t do the same without becoming absurdly long and losing the pace.

Now, Dejah Thoris. Quite a few of the reviews I’ve read like to talk about how she’s “different” from other female characters in sci-fi movies because she’s smart, an able fighter, and doesn’t dress in a more significantly skimpy manner than the men. She is cool, I agree. But I don’t know that it’s correct to praise her (and Andrew Stanton’s choice of portraying her) so highly. Really, are other sci-fi female characters that trivialised or objectified? Or, is Dejah Thoris not as trivialised or as objectified as the rest? Does John Carter really do any better in its treatment of female characters? …And as I sense myself beginning to run on into comparisons with other sci-fi heroines, I think I shall save those thoughts for another time and finish this review first.

Back to John Carter!

One thing I really liked was the colour scheme. I expected it to be predominantly red and brown – it’s set on Mars, after all. What I did not expect was that blue (and such lovely shades of blue) would come into play so frequently and in such aesthetically-pleasing ways. There was that shot early in the movie where the Confederates are chasing John Carter, whom they want to recruit back into the war (and who refuses to be a part of it anymore). They’re all dressed in blue, and their horses are chesnut brown; the sky is a clear summer-sky blue, and the ground and the rocky outcrops beyond are brown. I just thought, Ooooh, what a nice mirroring effect that has. The city of Helium flies blue flags, their army wears blue, and their royals wear blue – or accents of blue – quite often. Dejah Thoris has striking blue eyes. There’s a subtle irony in this… John Carter flees from blue on Earth (the Confederates) and eventually ends up helping the blue on Mars (Dejah Thoris, Helium). Making the Helium side blue deviates rather sharply from the book, where Dejah’s people are the “red” side, but this change is quite understandable too since it produces better visuals in terms of both visual contrast (they stand out better on all that reddish and brownish background) and psychology (blue is calmer than red).

Visual effects were great overall. There was one shot where the compositing looked a little bit on the fake side but I could’ve just been imagining it, and since that lasted barely 5 seconds, it’s a mild blip in a movie that’s over 2 hours long. No complaints about the production and costume design in general. (In the first place, I’m pretty sure that in the original novel, no one on Barsoom wears any clothes – just ornaments and accessories. So them just being clothed is good enough. hahaha Had they followed the “dress code” in the books, this movie would’ve been totally X-rated.)

I really liked the music. Michael Giacchino did it again. There’s a sensation and a certain tune or sound in the main theme that recalls his Super 8 soundtrack, but I find this one a little more memorable. There’s just more of a sense of wonder and romance in this one. Sometimes I really don’t like trying to describe music because my knowledge of it is rather limited and I feel and ‘see’ music more than I think in-depth about it. I recognise John Williams’ music and Danny Elfman’s and Hans Zimmer’s mostly based on the sensations they evoke – John Williams music tends to be epic or grand, and emotive; Danny Elfman music is quirky; Hans Zimmer music is intense and commanding. Haven’t figured out what exactly I associate with Giacchino’s stuff, but I’ll get to it gradually I guess.

To sum things up: I quite liked John Carter. The movie does live up to the good press it’s been getting. The title character could have been a little more likeable, but otherwise the story is interesting. Good visuals and good music are the icing on the cake.

– I liked how the Disney logo intro at the beginning was tinged red. Mars! I thought. hahah

– The touches of humour were well-placed. Woola was funny and endearing without being silly. The Tharks mistakenly thinking John Carter’s name is “Virginia” was hilarious. Kantos Kan’s “I hear that you…are… ve-ry dan-ge-rous” followed by the whispered, “Take me hostage” was well-timed and just so amusing.

– I had a number of “This reminds me of something/someone else” moments. A couple of scenes reminded me of Star Wars (especially the scene where John Carter and Tars Tarkas walk out into the arena to face their doom – that immediately recalled Geonosis in Episode II to me) and hmm, actually, the flying ships of Helium and Zodanga are rather like a cross of the ships in Howl’s Moving Castle and Jabba’s sail barge… At the end of the film, John Carter rather resembled Tristan Thorne in Stardust. I think it was the clothes and the hair. Dejah’s father (Ciaran Hinds) and Kantos Kan looked a little too familiar somehow, especially in that military getup. I wondered if I’d seen them in the HBO’s Rome series or in some period film. Wikipedia tells me that I was right – both were in Rome, and they played Julius Caesar and Mark Anthony.