This is turning out to be such a long, tiring weekend. So, a brief review of Hunger Games. 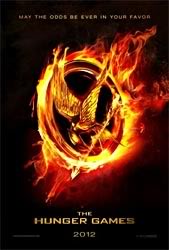 I seem to be in the habit of disagreeing with movie critics lately. John Carter was not lauded in many reviews, but I liked it. The Hunger Games has been praised to the skies in all but one or two reviews I’ve read, but I don’t like it.

The movie gave me a rather persistent headache, since most it was handheld, shaky cam style. I can handle that sort of thing in sporadic scenes scattered throughout a movie, but not when nearly three-quarters of the whole thing tries to emulate that sort of live, news camera feed. That’s a big, automatic minus in my books. I understand that they want to try and show it from Katniss’ point of view (the book is written from a first-person point of  view) but… but… Just too much shake. It was a good thing that I’d read the book beforehand. I could close my eyes and zone out a little to reduce the dizziness without getting confused about the narrative.

Overall they stuck to the story quite accurately. But some changes they made didn’t sit well with me, especially in how they took away from Peeta’s character and added to Katniss’s instead. I liked Peeta in the books but the little details that gave that character impact vanished in the movie. Elizabeth Banks did a very good job as Effie Trinket, I thought. So good that the character became a whole lot more likeable in the movie than she was in the books. Perhaps not exactly the effect it should have had. haha

They’ve also made a little too much of Gale – I suppose they want to prepare audiences for more of him in the following movies, but the exact relationship between Gale and Katnisis was unclear. I think people who haven’t read the books would assume that Gale is Katniss’ boyfriend (which is what one of the people I was watching the movie with did). That spoiled things somewhat, because then Peeta just seems like a jerk.

The clothes disappointed me. Cinna’s portrayal was fine, but the costumes themselves were rather underwhelming. Especially the dress Katniss wore to her interview with Caesar Flickerman. I expected something prettier than that. Speaking of Flickerman, I liked how they cut away to Flickerman and the other guy during the games just like how you would cut to commentators in TV shows. It served as a good way to explain things to the audience – such as the tracker jacker wasps.

There was an article somewhere that said Hunger Games and Battle Royale shouldn’t be compared. It made good points, but I still feel like I ought to see Battle Royale for myself if I’m to make any comparisons… Battle Royale looks rather too violent and bloody for my liking though. I shall have to think about it. haha