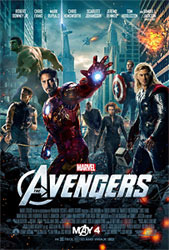 It was a fun movie, especially if you’re partial to any/all of the characters.

For the summary, I am going to paraphrase a bit from Wikipedia’s long synopsis:

The Tesseract, a mysterious glowing blue cube of energy, is stolen by exiled Norse god Loki (Tom Hiddleston).  Nick Fury (Samuel L. Jackson), the director of S.H.I.E.L.D., reactivates the Avengers Initiative, bringing together a group of heroes in an attempt to counter Loki’s schemes – which include bringing in an alien race called the Chitauri to invade Earth on his behalf in exchange for the Tesseract.

And now for my opinion (there will probably be spoilers – you have been warned):

The story advanced at a pretty good pace, and when a movie clocks in at a little over 2 hours, that’s a good thing. I think it does rely a little bit on the audience being at least vaguely familiar with the main characters – there isn’t a lot of time spent on backstories (which is good too; if they had decided to explain all six of them the movie would be longer than the extended edition of Return of the King). I don’t know how much I would have liked this if I didn’t already know of Captain America, Iron Man, Thor and the Hulk. The ones I knew nothing about were the Black Widow and Hawkeye, but a little poking around on Wiki the day before watching the movie helped give me some idea.

Not only was it paced quite well, but there was a nice mix of story elements in it – there were dramatic sequences, there were quiet moments, there were all-out action scenes, and there were humorous bits. (Tony Stark contributed a lot in terms of funny lines.) Hawkeye was a little underused, but I thought starting the movie with him falling under Loki’s mind control spell (or whatever it was) was quite a smart way of giving him a bit more attention without entirely taking away from the other heroes.

No complaints about production design and visual effects. (I rarely have anything to critique when the setting is contemporary, not fantastical or futuristic or historic. It’s difficult to really mess up production design for a contemporary setting.) But come to think of it, it’s a little bit curious – and amusing – that Bruce Banner’s pants never split entirely whenever he transforms into the Hulk…

I liked the music. Yay for Alan Silvestri! Can’t beat his Back to the Future score, though. Or even the Captain America one. I like those better. But still, the Avengers’ theme is kinda cool~ The suspense-building strings with the thumping bass notes, triumphant brass sounds. It has a sense of anticipation and victory that I quite like.

I’m not sufficiently acquainted with the characters to know whether their personas are true to the sources (i.e. the comic books), but Iron Man, Thor and Captain America were pretty much what I expected. The only one I was concerned about was Captain America. Being a fan of Steve Rogers ever since last year’s movie, I was most worried that they would alter his personality – turn him into a jerk or worse. Thankfully, they did nothing of the sort and I could enjoy the movie in peace. haha!  (I can see Edge rolling his eyes here: “So in love with Steve Rogers.” Shush, Edge. I claim my right as an unattached person to “fangirl” over admirable fictional characters as I wish. So there.

)
In general, though, I thought the main characters were played well – though the focus seemed to be a little more on Iron Man and Captain America than the rest. It took a while for the group to really “gel” together (which does follow the general flow of the story), but once they do, they collectively become more likeable. I’ve heard that Iron Man is/was a jerk, but he didn’t seem that mean in Avengers. He was on the snarky side, yes, but not to the extent where he’s hateful. Kind of reminded of Jack Sparrow – swaggering, flashy, always has some smart remark on hand, and needs a ‘straight guy’ to balance him out. Where Jack Sparrow had Will Turner as a counterpoint, I suppose here one could say it’s the same dynamic between Tony Stark and Steve Rogers. I also have to say: Tom Hiddleston makes an excellent Loki…

What I enjoyed the most, though, was the unexpected audience response. This was the first time I’ve been to see a movie in Penang where people actually started applauding during the show. The applause started when Captain America gave the policemen instructions and one demanded to know why he should listen to him, and at that exact point, some of the Chitauri came up and Captain America beat them up soundly – singlehandedly. Then, applause (and laughter, at the policeman’s subsequent reaction). I was pleasantly surprised. More applause followed later at various points when the other Avengers strutted their stuff. It was just really cool, and really fun. At such points you know the audience is really into the movie, and also really supporting the characters. And that just adds to the atmosphere.

4 thoughts to “The Avengers”