That first involved getting into Tokyo city itself from Nagareyama Otakanomori. I had no intention of witnessing Tokyo’s infamous rush hour live so I only left my friend’s flat at 9-ish in the morning. 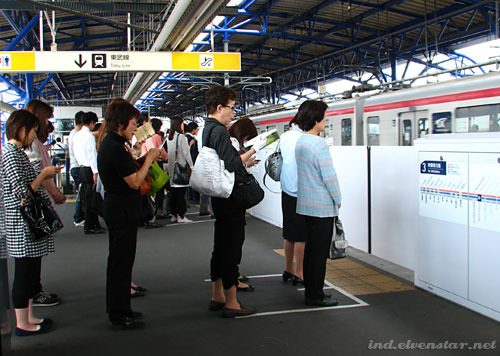 Orderly lines while waiting for the train to arrive at the Nagareyama Otakanomori station. 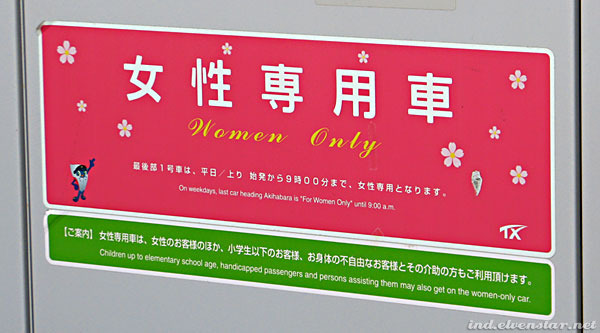 This sign on the barrier indicated the Women Only car on the train. The limitation only applies on weekday mornings up until 9AM though.

My route to Tokyo station from my friend’s place was basically two steps: Nagareyama Otakanomori to Akihabara via Tsukuba line, then at Akihabara change to the JR Yamanote line to get to Tokyo Station. Takes more than 45 minutes, maybe?

Anyhow I got there in time to catch the 10:03 Hikari shinkansen to Kyoto.
(There are 3 types of shinkansen, based on their speed. And this speed is determined by the number of stops they make. So the fastest one, the Nozomi, makes the least stops – only serving the biggest stations I guess. The Hikari is the second fastest, serving the major stations and a few other smaller ones along the way. The Kodama is the slowest one, stopping at a good number of stations. The Kodama is the one you want to avoid. The difference between Hikari and Nozomi isn’t much. The Nozomi takes about 2 hours 15 minutes to reach Kyoto, whereas the Hikari takes 2 hours 30 minutes. The Kodama will take over 3 hours to get to Kyoto.) 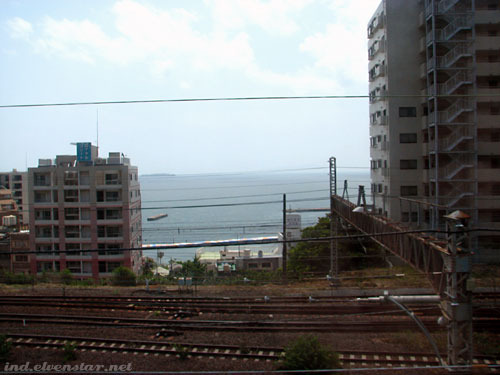 Passed by the holiday town of Atami along the way.

Arrived in Kyoto around lunchtime, accidentally stumbled across the Visitor Information Centre in Kyoto Station and bought a bus day pass there before wandering around the station in a slightly dazed manner in search of the bus stop. Don’t know why it didn’t occur to me to ask where the bus stop was when I inquired about the day pass. Anyway, I found the bus stop, figured out which bus I needed to take, and eventually found my way to the Khaosan Kyoto Guest House.

(One thing about travelling alone is that it gets really exhausting really quick. You have to carry your luggage around yourself – and this is tiring even if you aren’t dragging a huge travel bag with you; even just a backpack and a carry-on luggage bag is enough to be tiring after a while. You have to figure everything out on your own – which direction is the platform, which train should/can I take, is this a reserved car or not, how do I get there from here, do I have to change trains, etc. And in a way, you can’t really relax; you certainly can’t go to sleep on the train or just zone out because you have to be hyper-alert all the time as you need to watch your stuff and you need to be aware of where the train is, whether it’s your stop or not. It’s not easy. Yes, it’s nice to do whatever you like without having to consult or consider anyone else, but the downside is that it can get lonely and it’s twice as exhausting because there’s no one to help you and it’s both physically and mentally taxing. And really, by the time I got to the hostel, I was feeling quite tired already even though I hadn’t done much.)

Met up with Yang and Danny at Khaosan. Yay! Not alone anymore~

Then we set off for Kiyomizudera (清水寺). Took a bus, I think, and then walked up the street to the temple. I think the street was Matsubara Dori. I think. I didn’t take note at the time, so I’m just guessing based off Google Maps. Starting up the hill… It was a hot day. My big floppy white sun hat came in useful. 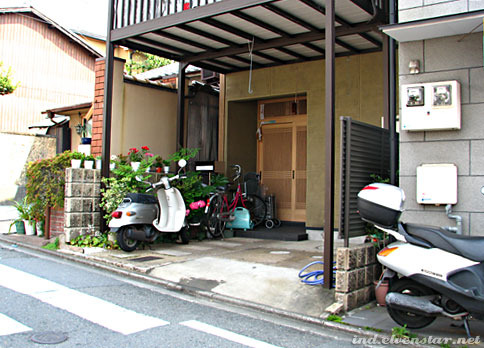 Random house along the way. I liked the impression that corner made – with the plants and the motorcycle and the bicycle. 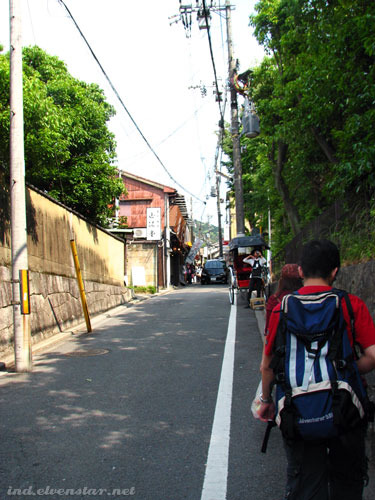 As it was hot, when we saw shade, we scuttled over to take advantage of it. 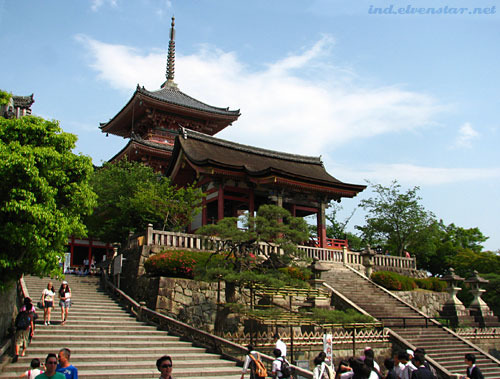 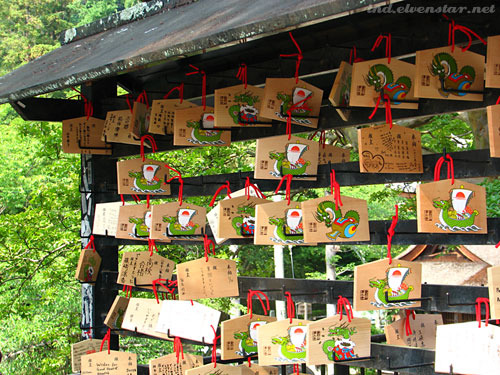 Ema with pictures of dragons on them. Ema are “small wooden plaques on which Shinto worshippers write their prayers or wishes. The ema are then left hanging up at the shrine, where the kami (spirits or gods) receive them.” 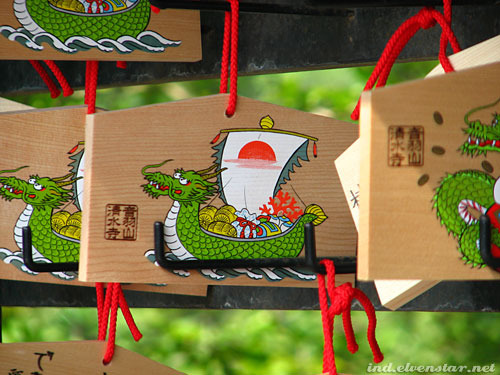 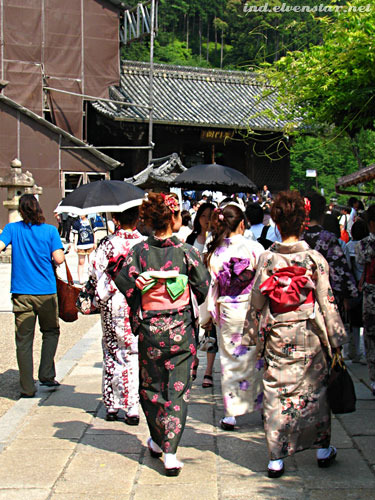 Girls wearing kimono. It’s a common sight in Kyoto to see people dressed up the traditional way. Yang and I would have a taste of that on my third day in Kyoto. haha 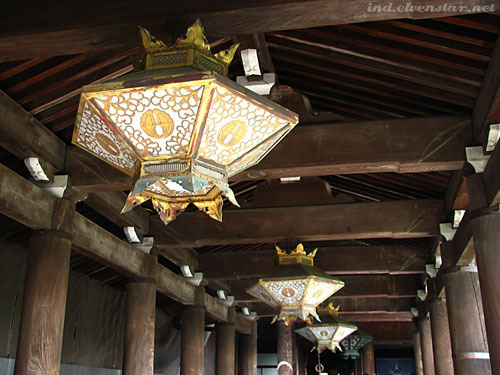 Look at that huge rope. I suppose it’s like a giant bell-pull… thing. Like, you’d swing it to sound the gong at the top? 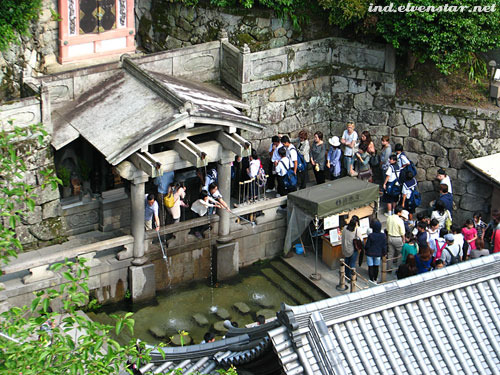 The Otowa Waterfall is located at the base of Kiyomizudera’s main hall. Its waters are divided into three separate streams, and visitors use cups attached to long poles to drink from them. Each stream’s water is said to have a different benefit, namely to cause longevity, success at school and a fortunate love life. However, drinking from all three streams is considered greedy. I wonder which stream is which. 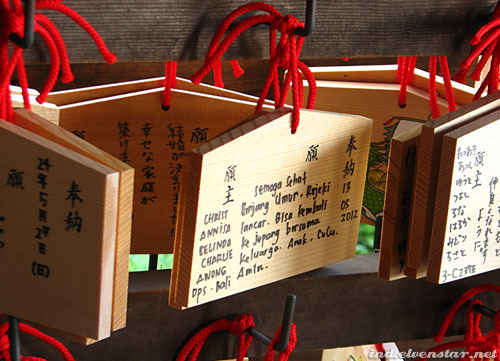 More ema. We saw one that at first look appeared to be written in Malay. But upon closer inspection, it’s Bahasa Indonesia. The steps leading up to the Jishu Shrine (地主神社) behind Kiyomizudera. (I didn’t know what this place was called when we were there; I only just found out the name, after looking up something for this blog post. haha Also, I just noticed that the vertical sign in red reads: えんむすびの神, God of Marriage.) 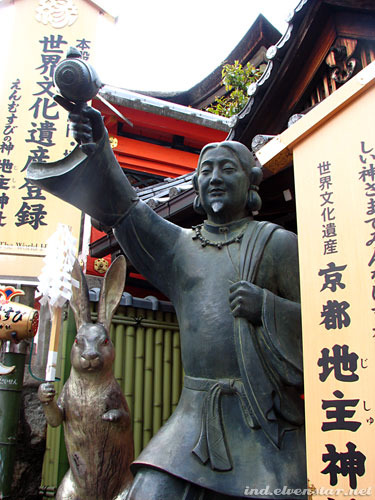 At the top of the flight of stairs to the Jishu Shrine, there was this statue. The signboard next to it informs visitors that this is “Okuninushi no Mikoto” (Lord Okuninushi), who is “a Japanese god who is in charge of love and matches. The rabbit beside him is a messenger of the god.”

Frankly, I didn’t notice the rabbit until I read the signboard. I was amused. That’s not a very cute bunny though. (I tried to look up the exact connection between this Okuninushi and the rabbit, but the closest I could get was the story of Okuninushi helping a rabbit – it doesn’t say if or how the rabbit becomes his messenger though.)

I think this is the shrine itself? 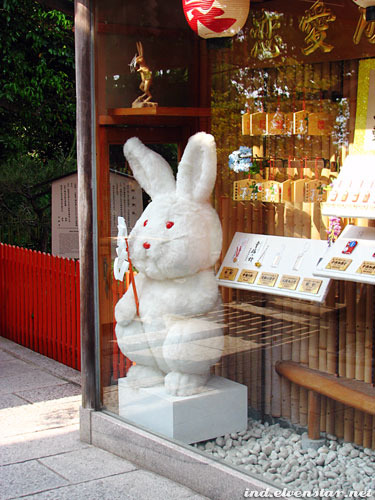 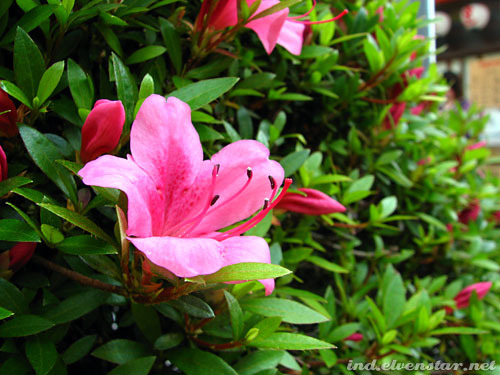 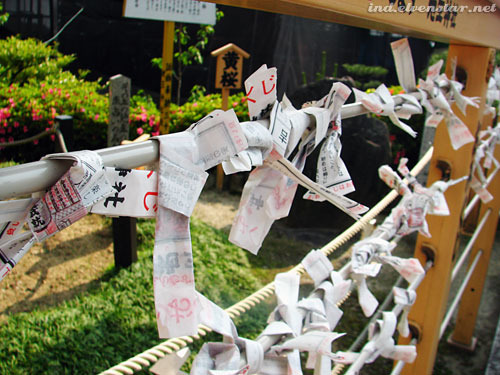 Omikuji. (“Omikuji are fortune telling paper slips found at many shrines and temples. Randomly drawn, they contain predictions ranging from daikichi (“great good luck”) to daikyo (“great bad luck”). By tying the piece of paper around a tree’s branch, good fortune will come true or bad fortune can be averted.” [Source] [Wiki]) 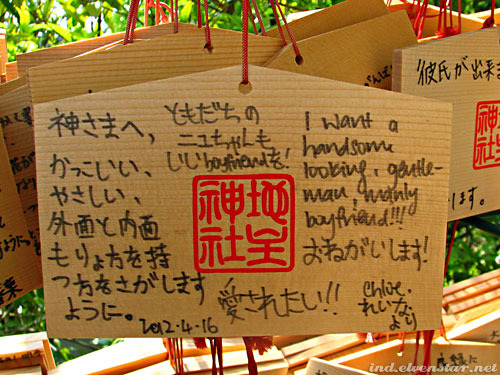 This ema made me laugh. I told Yang that this girl left out one thing: “rich.” (Because, hey, if you’re gonna do this, you might as well go all the way and wish for an impossible prince charming. hahaha) 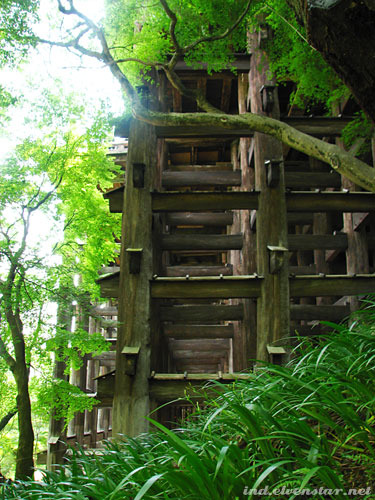 We walked down to the Otowa Waterfall and noted that the temple was built on this stilt/platform/thingies. Lots of interlocking wooden beams. 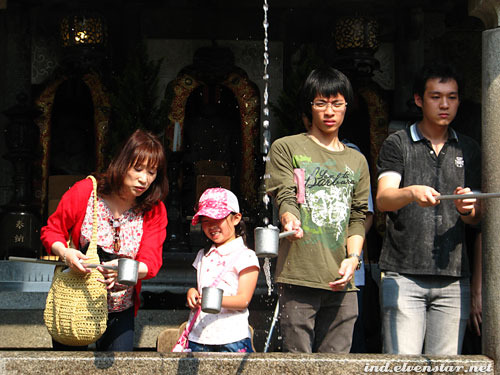 People taking some of the Otowa Waterfall water. We stopped to rest and have some kakigoori – shaved ice with syrup on it. Meh. Our Malaysian ice kacang is better. hahah But it was nice to have some cool ice in all that heat. 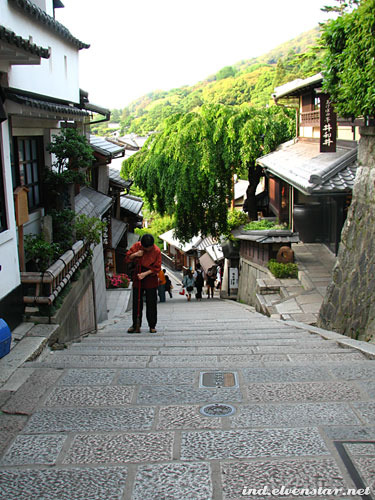 Passed by this on the way back down from Kiyomizudera. Not sure if this is the famous Ninnenzaka or Sannenzaka. I need Angie to tell me. 8D 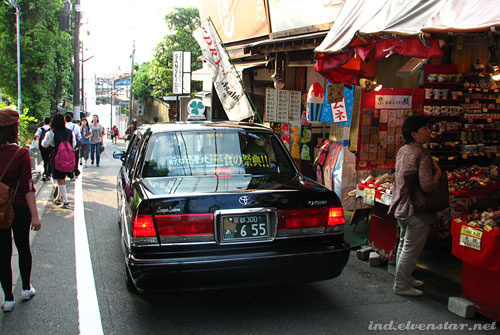 Almost back down at the bottom. (This picture is mainly here to show you that this road is narrow and just wide enough for one car. haha)

I had too many pictures so I decided to split Day 2 into two separate posts. Part 2 soon…