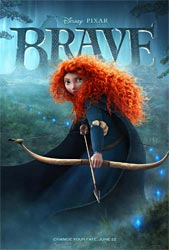 Pixar’s latest, Brave, is basically a story about a mother and daughter coming to understand each other. Teenage princess Merida (Kelly Macdonald) only wants to enjoy her freedom, to ride out on her horse, Angus, and to make use of her archery skills. Her mother, Queen Elinor (Emma Thompson), just wants her to learn the necessary skills to be a princess – skills which do not include being the best archer around. When the firstborn sons of the three other clan leaders – MacGuffin, Macintosh and Dingwall – are presented as suitors for her hand, Merida rebels and after an argument with the queen, she takes off into the woods. There she happens upon a witch, whom she asks for a spell to change her mother…

Nearly all the reviews I’ve read peg Brave as an “okay” film, but nowhere near great. After reading so many such articles, I went into Brave with rather lowered expectations. Maybe that helped, because I didn’t think it as much a disappointment as some critics made it out to be.

The story was fine. It won’t prompt intense philosophical discussions and thoughts about life and death and the purpose of life like the Toy Story films did, nor does it put a wholly new spin on stories about family as Finding Nemo or Incredibles; but it is a fairly solid story, despite being a tad generic (parent/child disagreements which end with both sides coming to an understanding). But if we’re going to talk about generic, then I consider Ratatouille and Cars to have generic storylines too. So this really isn’t something that’s shockingly new in Pixar’s record, I think.

It does swing quite a bit in tone; from the humour and raucous roughhhousing of the men of the clans, to the quiet tension and later tenderness between mother and daughter. Frankly, as it was quite easy to predict how the mother-daughter issues would be resolved, I was more interested in the clans because they were more amusing and it seemed trickier to resolve the problem of clan lords disgruntled because the princess won’t or can’t make her choice of which young man to marry (and, I suppose, the perceived insult in her not choosing any of them). I do agree with some critics in that it might have been more interesting if they had taken a slightly different direction – for instance if they had made the repercussions of Merida’s actions more immediate and intense, it might have given it that “more mature” edge that people have come to expect from Pixar. Then again, that might have detracted from the central story, which was the relationship between Merida and her mother.

On a technical level, Pixar really cannot go wrong. It was a visually beautiful film, and I think they successfully recreated the feel of Scotland. There were several shots that struck me as bearing a distinct resemblance to Loch Ness and the Urquhart Castle ruins on the banks of Loch Ness. I don’t know if that was done on purpose, but if it was then it’s a job well done! If it wasn’t, then they’ve successfully absorbed so much of the Scotttish scenery that even when creating something purely out of the imagination it turns out to be eerily similar to the real thing. haha

I found myself gaping not at the crazy mess that is Merida’s red hair, but rather at the texture of her clothing Amazing to look at. When she ran through the river her dress got wet and it looked like a realistic representation of what would happen to the material when soaked with water. Trying to imagine how long it took to get that look right and how long it would have taken to render a single frame of that boggles my mind. I salute their simulation department.

The music was very Scottish. I’d forgotten how accustomed to bagpipes I’d become. (That doesn’t mean I want bagpipe music being blasted right into my ear. It just means I don’t find bagpipe music as alarming or annoying as I did prior to my year in Edinburgh.) I have no complaints about the music, which was written by Patrick Doyle. It didn’t cement an impression in my mind like music by John Williams or Danny Elfman or Hans Zimmer tends to do, but it was quite effective in putting the feeling of Scotland across.

(Tangent: I always seem to divide my movie reviews by technical department, don’t I? haha Story/characters, visuals/effect, music. I can’t seem to write the deeper, thought-provoking types of reviews that real critics write – reviews that have a real “thesis statement”. Mine just boil down to “I liked it” or “I didn’t like it”. heh)

Minor rants:
– I think the original title, “The Bear and the Bow”, would’ve been better than “Brave.”
– The witch looks very much like the old female characters in Miyazaki’s Studio Ghibli films… Just a little more spry.

Although I can’t say that Brave is one of Pixar’s great works, I wouldn’t say it’s their worst either. It’s an entertaining watch, with a scene that I found really touching (and if a film can prompt a tear or two, I think they’ve done something right – even if I am a sentimental and emotional person to begin with). It showcases Scotland’s highlands beautifully and as Merida being an archer too (alongside Katniss Everdeen), maybe we’ll see an interest in Scotland and in archery spiking this year.