On this day, we headed out of Kyoto to a town called Hikone on the shores of Lake Biwa. 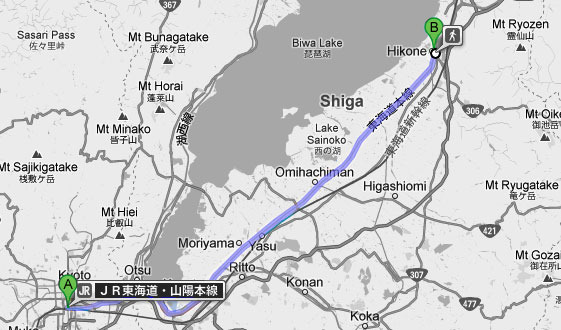 Oops, forgot to label the map. If you can’t make it out, A (the lower green marker) is Kyoto, B (upper green marker) is Hikone. There’s a direct “special rapid” train from Kyoto to Hikone, the route of which is marked here in blue. You can take the shinkansen too but you’ll have to stop at Maibara and change to the local Tokaido line to get to Hikone, and that will take a little longer overall. (All of these trains are JR line trains.) 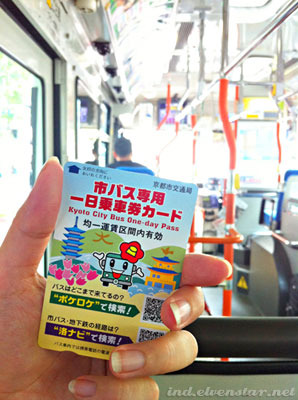 We took the bus to Kyoto Station. This is Kyoto’s City Bus day pass. So pretty! (500yen per day; each bus trip within the city is 220yen one way so if you’re going to use the bus at least 3 times in a day, getting this is a good idea.) I think I posted this pic on Instagram or Twitter that day with the caption: “Japan, land of cute designs.” haha 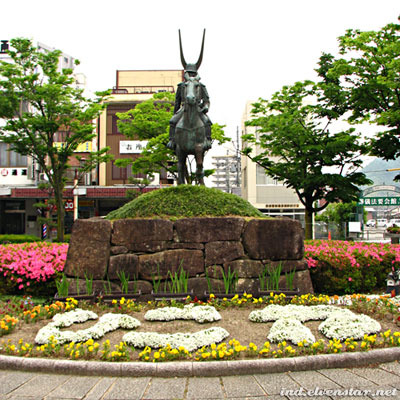 The train ride to Hikone took about an hour, and this statue of a samurai on a horse greeted us at the Hikone station. The white flowers on the ground spell “Hikone.” 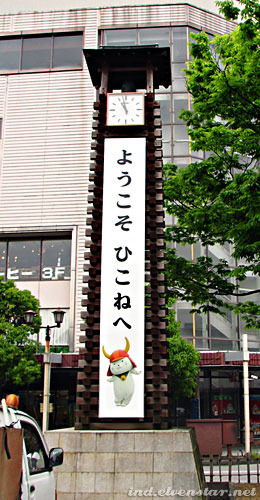 “Welcome to Hikone!” The creature pictured at the bottom of the signboard is Hikone’s mascot, Hiko-nyan, a cat wearing a samurai helmet. (And we arrived at nearly 11am, according to that clock there. haha) 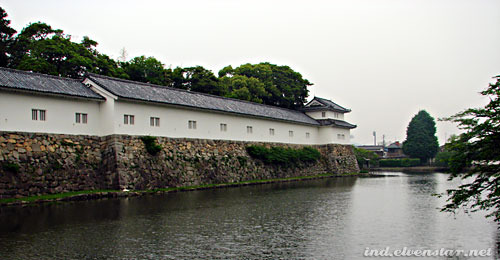 A short stroll down the weirdly quiet main road took us to Hikone-jo (Hikone Castle), which was our main purpose in going to Hikone. Above is part of the moat surrounding the castle.

Hikone-jo is one of four castles in Japan designated as national treasures (the other three being Himeji-jo, Matsumoto-jo and Inuyama-jo). There were a few groups of school children just leaving as we arrived. The building on the right is the entrance to the castle museum.

We bought entrance tickets that gave us entry to the museum, the castle and the gardens. We went into the museum first. It was quite nice, though the labels were all in Japanese so it wasn’t exactly informative. There was stuff like Noh masks, swords, household items, scroll paintings, old letters, stage performers’ costumes and musical instruments. I didn’t get any particularly gorgeous shots (mostly because it was too dark for photography and I dislike using the camera flash when there’s glass around to reflect the light) so I didn’t pick out any for this blog post. 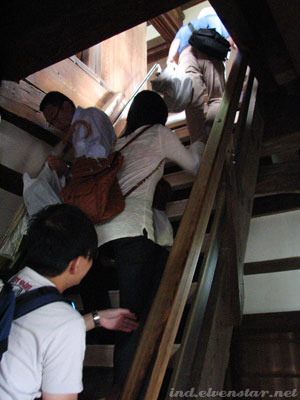 The stairs inside the castle were so steep! I did hate going up and down those stairs. So scary especially when the stairs are steep, narrow, made of metal, and you’re only wearing socks. Socks don’t give you a good grip on those surfaces. Scaryyyy. 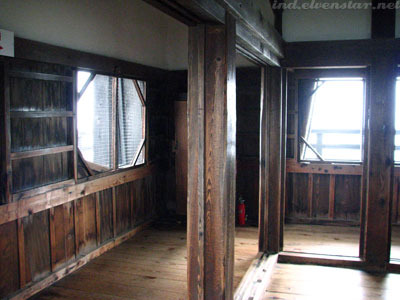 The castle interior was really boring. It basically looked ike this pic above, wherever you were in the castle. No furniture, no decorations, nothing. A few signboards here and there but again, all in Japanese. The exterior, however, was really quite pretty. *pulls back the camera for a wider shot*
This pic looks fine when small, but it’s rather grainy and not as sharp as I would’ve liked it to be at full size. The pic before this was near-perfect… and taken with my iPhone camera. …I don’t understand how that happened. sigh. 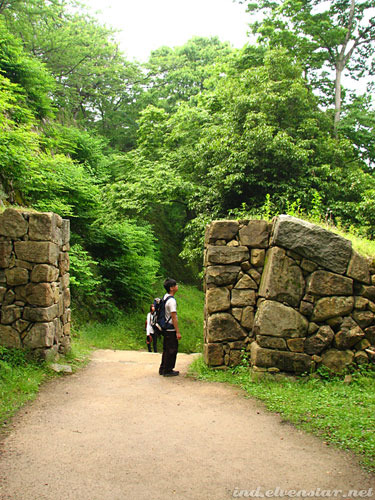 After the museum and the castle, we headed for the Genkyu-en. (It’s usually called “Genkyu-en Garden” on various sites but as “en” here indicates a garden or park, that feels redundant to me. “Genkyu Garden Garden?”) The pic above shows Danny staring at some stones in the wall along the path down to the garden. haha 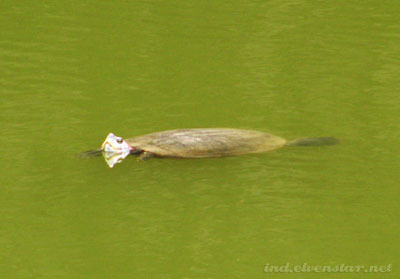 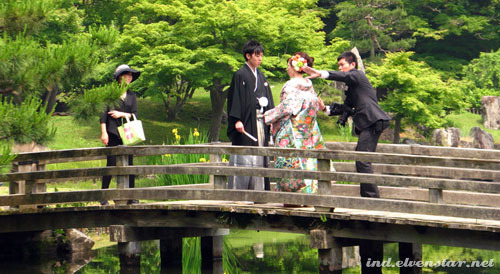 In Genkyu-en itself we saw a couple having their portraits taken. Presumably pre-wedding shots or something? The photographer was busy directing them. haha 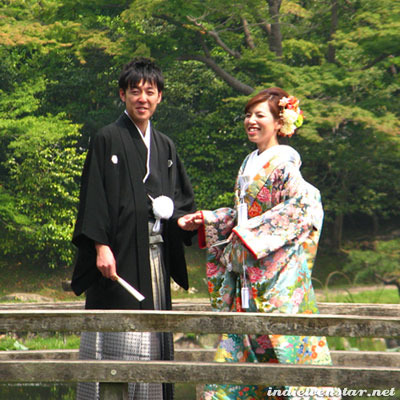 Happy couple! Her kimono looks so bright and colourful~ 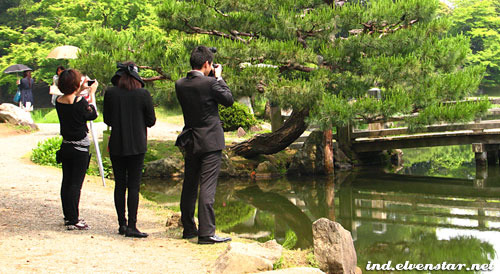 The photographer and his assistants. (I thought it was interesting that the photographer was wearing a suit. Hmm. Feel sorry for him though – it was so hot that day.) 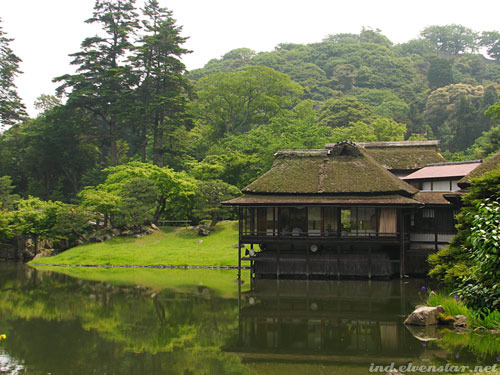 The teahouse over the pond in Genkyu-en. Would’ve been nice if we could’ve had tea there, but it looked like an expensive place. 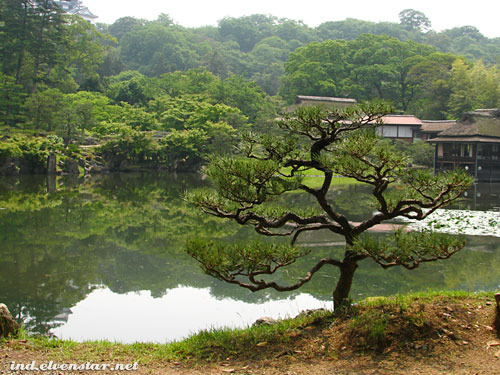 Is this some sort of large bonsai? I don’t know. But it made for an interesting shape.

If only it hadn’t been so blazing hot it would’ve been a little easier to take photos. As it was I just kept wanting to run to shady places. And for some reason so many of my pictures didn’t come out as sharp as they should have. I fear that I’m losing my touch… 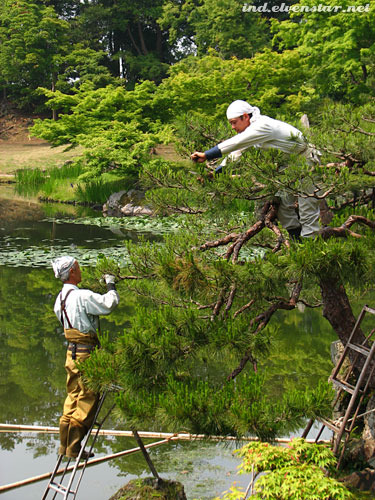 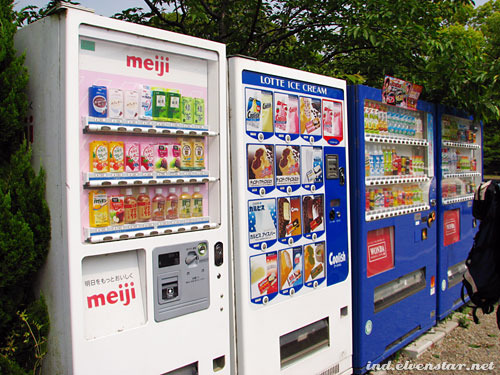 Vending machines! One contained ice-cream, so I bought ice-cream to cool myself in the heat. That ice-cream was really quite nice. haha 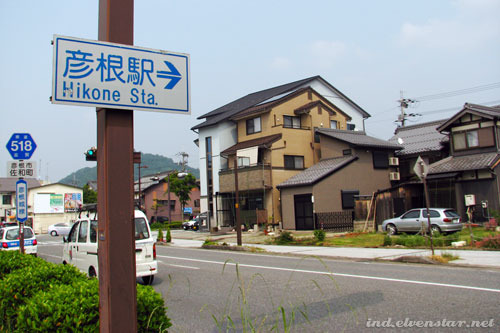 After that we headed back to Hikone Station, hoping to find something to eat for a late lunch along the way. 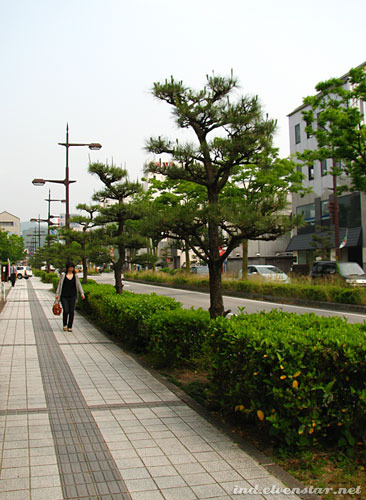 Seriously, this place was waaaaaay too quiet. After the mass of people everywhere in Tokyo and the busy-ness of Kyoto too, this was a bit of a shock. It felt almost like a ghost town in comparison. 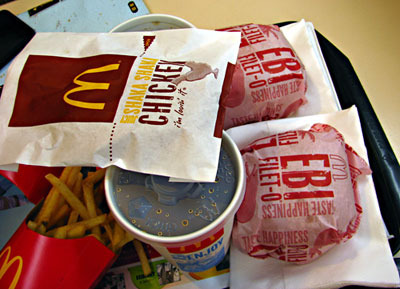 We eventually ended up having lunch at McD. I like McD because they have an English version of the menu (which you may not find at every eatery you go to). McDonald’s Japan doesn’t have Filet-o-fish. It has Ebi Filet-o. Prawn burger. It was nice! And where we in Malaysia have Shaker Fries, they have Shaka shaka Chicken – a chicken fillet with your choice of red pepper or cheese flavouring. Red pepper tasted better than cheese. 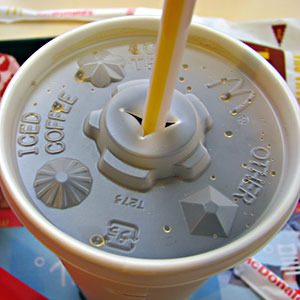 I was kind of fascinated by the plastic cup covers. Theirs had nice fancy raised patterns – the pentagon, the flower, the circle with spokes. Here, we just have bland circles. At Hikone Station, waiting for the train back to Kyoto.