These days my posts are all either “movies” or “Japan”, aren’t they? haha 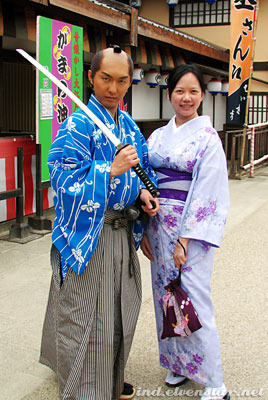 The samurai fellow came out to inform people that a show was about to begin in the Nakamuraza. We just had to take pics with him. haha Unfortunately I don’t have Yang’s and Danny’s pictures, only my own. Yang, are you reading this? I want your pic and Danny’s also! The show turned out to be this guy telling some story and doing some magic tricks. We found it rather dull because our understanding of the language is too limited. :/ Perhaps if this had been one of their ninja shows instead it’d have been more interesting. But we decided after a while to just slip out and continue exploring the rest of the park. 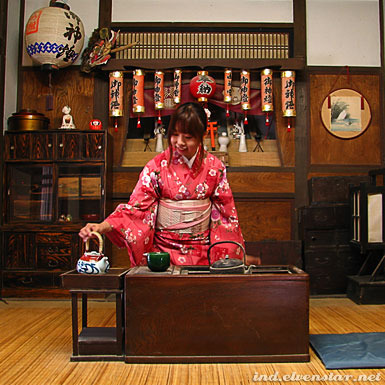 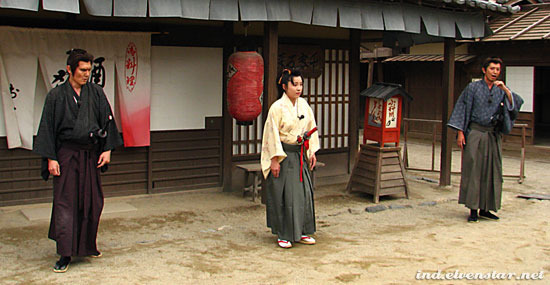 We came across a chambara show – or the tail end of it at least. They were just wrapping up their performance as we got there. But they weren’t entirely done! They called for 3 volunteers from the audience. They’d teach them some simple moves and then the volunteers would get a chance to “fight” the bad guy. This girl in grey was particularly enthusiastic… (Can’t remember what happened immediately before I took this picture but I think he did something and she was laughing at him so he was demanding to know what was so funny. lol) Close-up shots of the three actors. Teaching the young’uns how to use katana. The guy who played the villain was really good – he was funny and very expressive, which made for a lot of laughs. 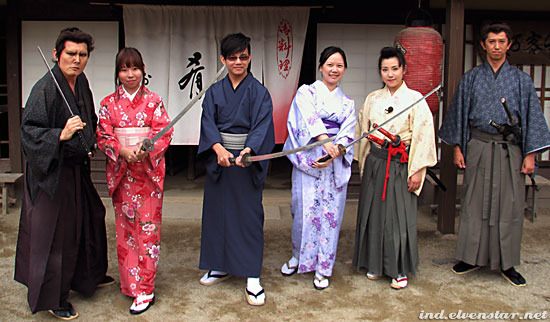 They allowed people to take pictures with the actors after the show was over. We were really surprised by how efficient they were. Everyone lines up, a few baskets are put on the ground, and a staff member comes out to help. When it’s your turn, you give your camera(s) to the the staff member and place your bags and  things in the baksets then go and pose with the actors. The staff member will take the pictures for you and after that you retrieve your things. The end. SO efficient and well-planned.

I have videos of the 3 volunteers fighting the bad guy, but the videos are all so shaky and unstable that I don’t think I’ll upload them. However, I do have a video of the bulk of the actual skit prior to the volunteer bit because later on we came across the same show and managed to see the full skit. Managed to catch most of that one on video.There were also less people watching at that time so I had a better view.

What I think is the gist of the story: This girl is some rich man’s daughter who managed to slip out of the house for the day (from about 0:19-0:25 she’s imitating the people at home – the servants? – who fuss over). The two guys are looking for someone and mistake one of the innocent people around for the person they’re searching for. The girl interrupts, trying to defend the innocent bystander, and gets embroiled in a swordfight with the guys. She wins. The end. hahaha 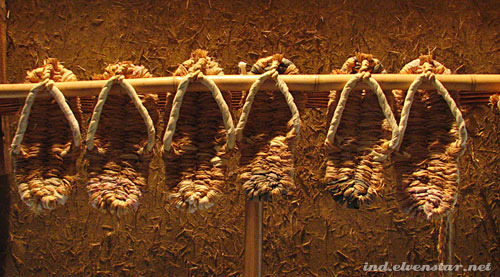 Straw slippers hanging in a house. 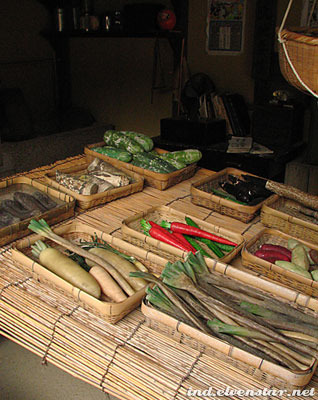 Fake vegetables for sale. (They look pretty real though…) 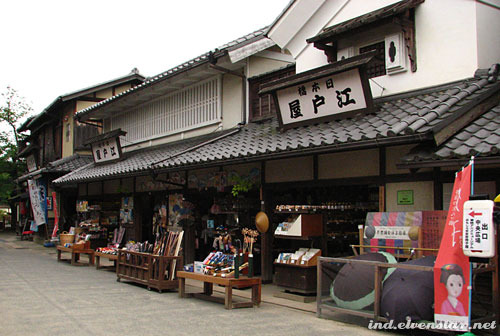 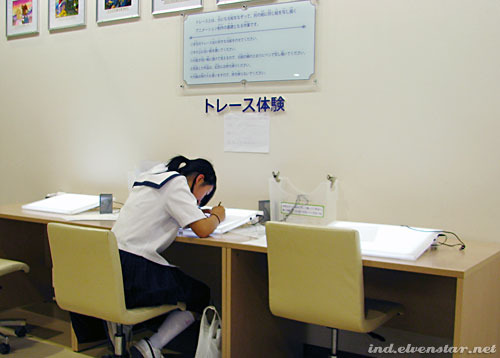 There was a small anime museum which didn’t hold much interest for me since it didn’t feature many anime series that I knew well. And my interest in figurines is limited. If it had been full of storyboards and concept art, that would’ve been a different story. They did have this “tracing corner”with three light desks, some paper and a number of drawings of anime characters attached. You’re supposed to be able to take a sheet of paper, sit down and trace the pictures – which is what this girl was doing. If they had pictures of characters I liked, I would’ve done so too. haha A replica of an old carriage. Over at the Port Town section, there’s a pool in which a monster dwells. Periodically, this creature will pop up out of the water and spew “steam” (well, it’s just water, I figure). Not very impressive. But I think it’s fun for little kids. Or maybe it’s more fun if you’re not aware that something is supposed to come out of the water. 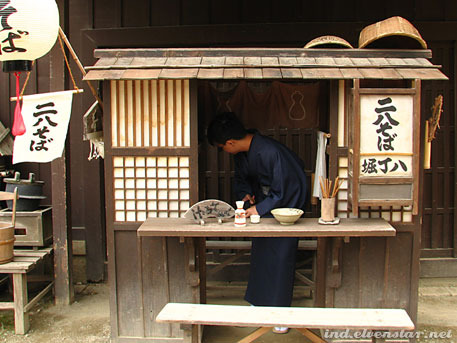 There was a little stall by the pool – a soba stall, if I read the signboard correctly. Danny decided he wanted to try selling soba. hahaha They have a few actors and actresses who go round the park dressed in historic attire and you can take pictures with them. You can also talk to them – on several occasions I saw people chatting with the actor, but of course we couldn’t do that, not being able to carry proper conversations in Japanese.

We left the park after spending about 3 hours in there. 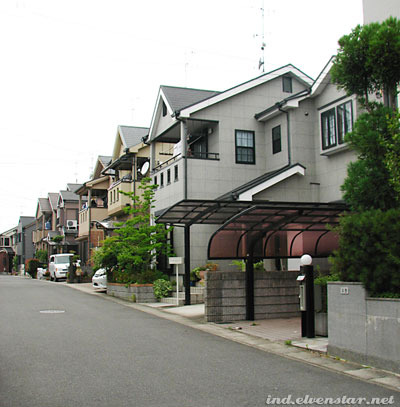 Some tidy-looking houses along a side street. 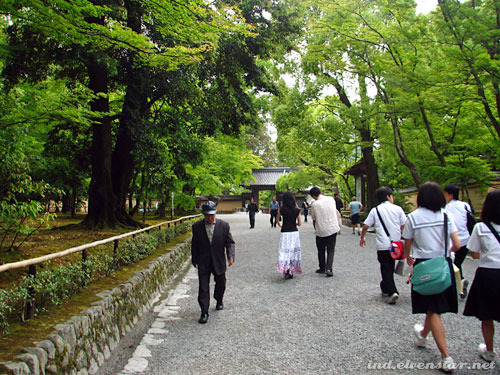 The approach to Kinkakuji. I had a picture of this place up on Instagram and one of my friends saw it and wanted to know how I got a clear shot of the place without 7 million old ladies getting in my way. lol. I guess it’s because we got there only an hour before closing time and so most of the tourists had left? 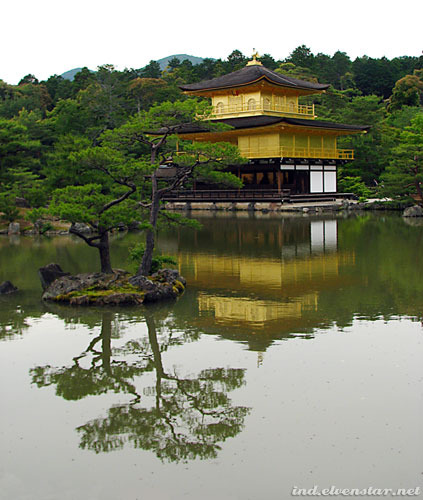 It overlooks a big pond. Quite a pretty scene, really. 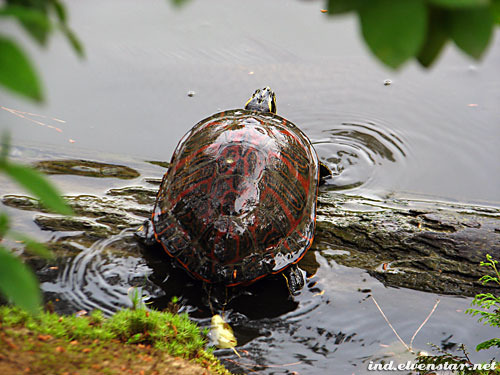 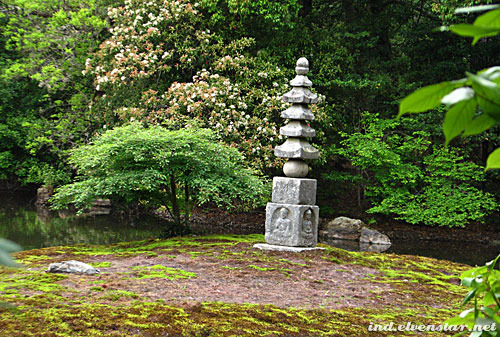 A stone… pagoda? I don’t know what that should be called. heh. 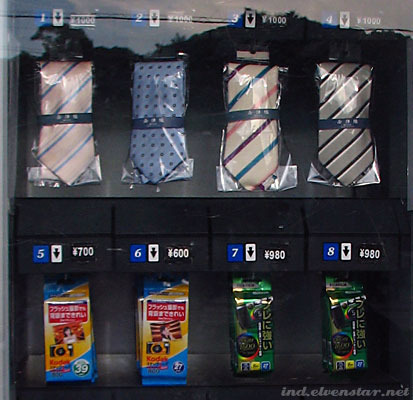 The most unusual vending machine I saw during my whole 10 days in Japan was this one that had ties in it. And disposable cameras and batteries. Kind of an odd combination. Ties and cameras? 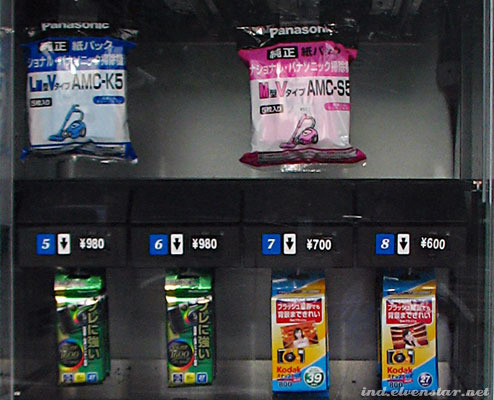 This was the machine next to the one with the ties in it. It had… vacuum cleaner bags alongside disposable cameras, batteries asnd SD cards. lol. Such odd combinations.

Oh, wait. This was also the day I fell ill. I was okay during the day but towards late evening, around dinnertime, I started feeling really tired and wanted nothing more than to go back to the hostel and rest. Feet were aching, mind was feeling fuzzy, eyes were heavy. So after dinner I went back, took a bath and was off to sleep by 10.30pm or so. You know, it is horrible to be ill and to be in a shared dormitory. I woke up numerous times to just cough or because it was stuffy. I didn’t want to adjust the air-con temperature or speed if I could help it in case the other five people in the dorm objected to the change. Then finally at about 1am, I decided that it was far too hot for me. I got out of bed – the other five were asleep – and went to look at the air-con. And I realised that someone had turned it off. ARGH. I turned it back on and tried to go back to sleep once the room cooled slightly. At least I slept a bit better after that.