I woke up feeling a lot better than the night before, though still rather drained. We were supposed to go on an English tour of the Kyoto Imperial Palace but unfortunately arrived late and so missed it 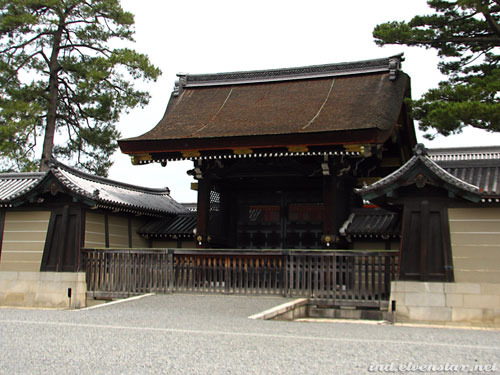 Had to make do with staring sadly it at from the outside. This is the main gate. 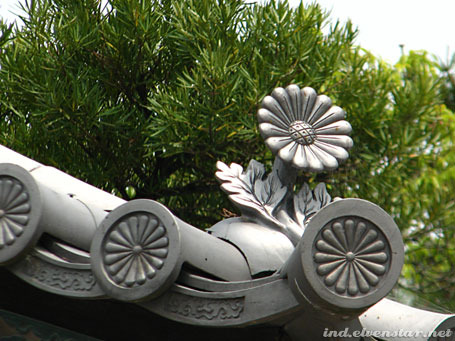 Pretty flower carvings along the top of the wall. 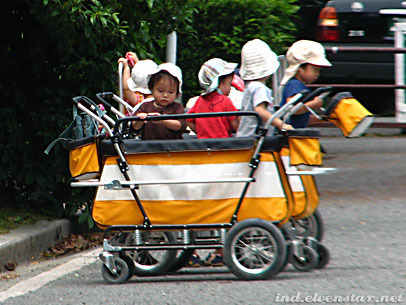 Saw these kids in big prams. So cute! haha 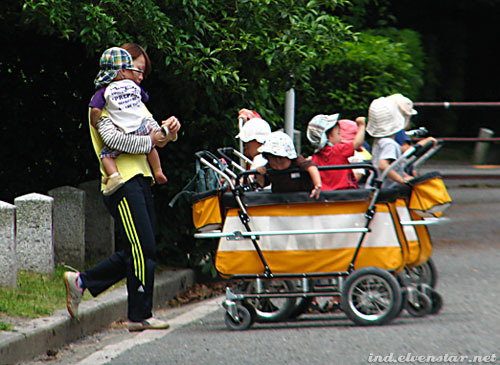 I suppose it was a nursery school outing of some sort. 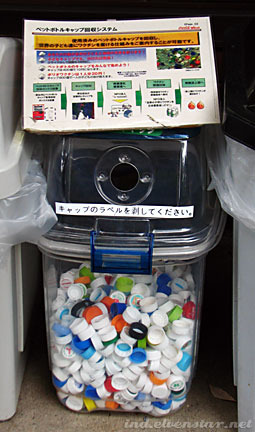 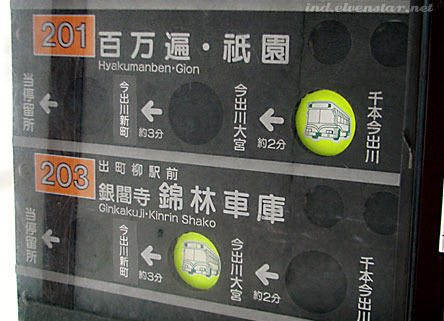 Many of the Kyoto bus stops have signboards like this that indicate approaching buses.

The next four pics are photos snapped while on the bus. Shooting photos through the bus window meant that sometimes the colours went weird. I tried to fix them, but not all were entirely successful. heh 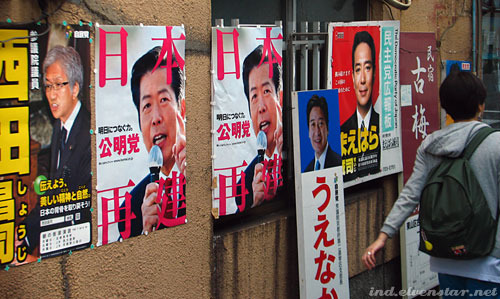 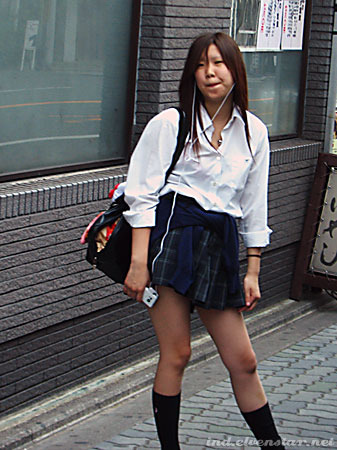 School girl waiting at a bus stop. Gee, that skirt was pulled up high… 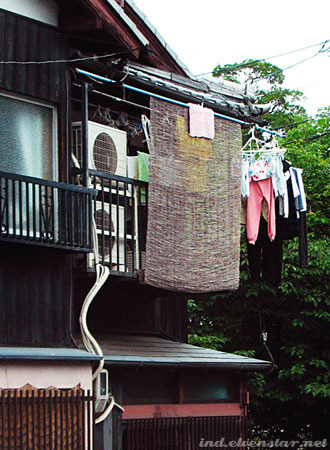 Someone’s laundry hanging out to dry. 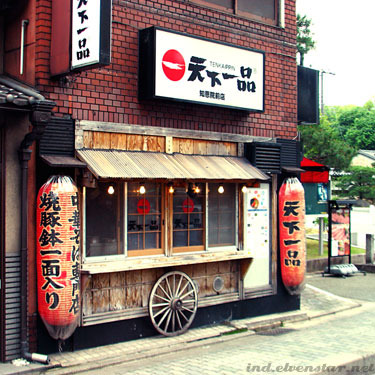 A restaurant with an interesting exterior.

We went back to Kiyomizudera because Yang wanted to exchange a set of cups that she’d bought (one of them had a crack in it). I ended up buying a few more souvenirs myself – including a blue fan which had a bunny on it! *bunny mania* 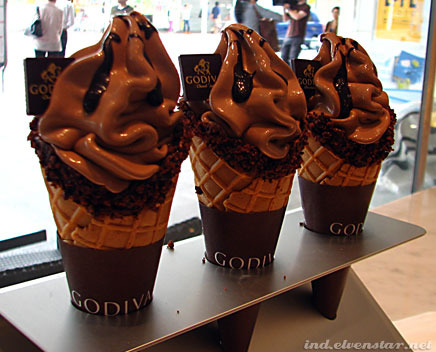 We stopped at the Godiva store/cafe once back in the Kawaramachi area and had awesome chocolate ice-cream. I feel hungry just lookinig at this pic and recalling it. haha

Walked around Teramachi Dori a bit – Danny tried his hand at one of those prize game machines. Like the claw machines. Except that this one wasn’t a claw concept. Hmm, how to explain it. You had to try and get the bar thingy to fit into one of the 12 holes – different shapes, arranged at different heights; and each one corresponded to a different prize. Quite tricky. Sadly, his attempts were all unsuccessful, though he got pretty close a few times.

After wandering there for a while, we parted ways. Yang and Danny headed to Osaka, and I was going back to Tokyo. I had a little bit of time to kill but didn’t do much beyond getting my bags out of the hostel and figuring out which bus to take back to Kyoto Station. 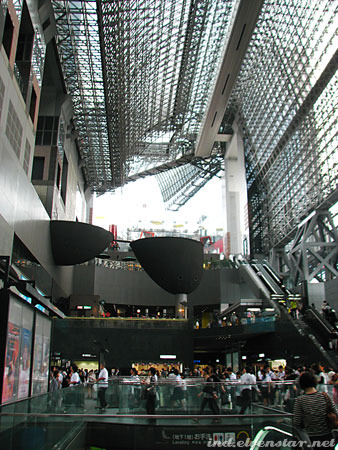 I would’ve liked to wander around it but as I had my luggage with me, it didn’t seem like a sensible option. I opted instead to go to the ticketing office and reserve a seat on the bullet train. I didn’t have to – for the journey into Kyoto I didn’t reserve a seat and just found a spot in one of the unreserved cars – but since the JR Pass allowed me to make a reservation for free (reserved seats cost more than unreserved seats), I figured I might as well give it a try. Got my seat reserved on the 4.56pm train and felt happy for no real reason.

(I chose the 4.56 train because I wanted to make sure I arrived in Tokyo after rush hour. It was either I took an earlier train and arrived in Tokyo before 5, or I took a later train and arrived after 7. I decided on the later train. Logistics, logistics. I really think a good quarter of my energy was used up on pure logistics management on this trip…) 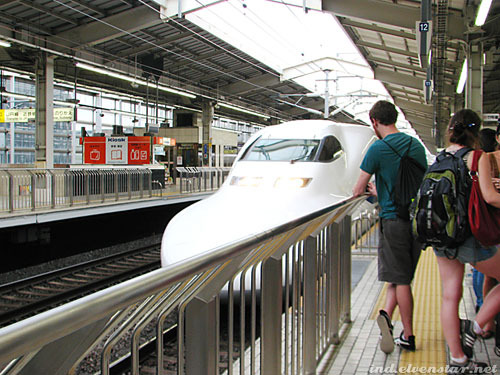 This is what the front of a bullet train looks like.

I decided that I wanted to get a shot of the front of the bullet train, and had to set my camera on multiple shot mode to get this picture because I didn’t trust myself to be able to hit the shutter button in time when the train zoomed into the station. I figured if I just let the camera click away continuously when the train pulled in, at least one of those shots would be decent.

See that guy in the green T-shirt? He was obviously trying to take a picture of the train as it came in too. But I must note that he was standing where he shouldn’t – you’re not supposed to stand beyond the yellow line (even if there are protective railings there). Tsk tsk, Mr Tourist. 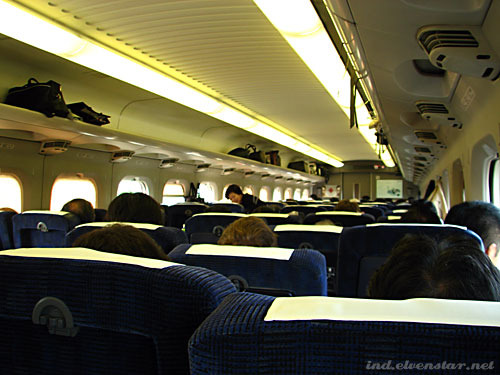 A glimpse of the inside of the bullet train. Unreserved cars look the same – there’s no difference. There’ll only be a difference in leg space between the “green cars” and the normal cars. I guess it’s like business class vs economy class on planes.

And that’s it for now.