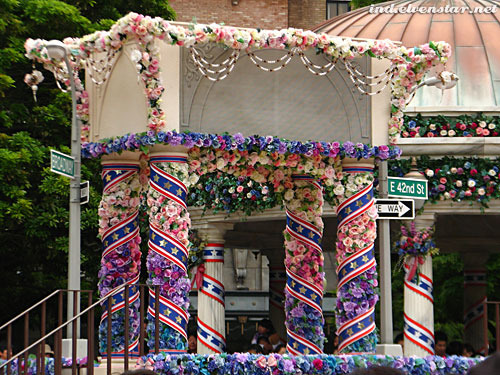 One of the little stages set up in front of the Tower of Terror for the “Easter in New York” show. So floral, and such pretty colours~

My own video of the show was pathetic because I was blocked by other people and, moreover, gave myself a headache by trying to video it with my iPhone in one hand and take photos with my regular camera in the other hand. (That’s what happens when you can’t decide what you want more – photos or videos. haha) But I found a pretty good video on Youtube! Here: 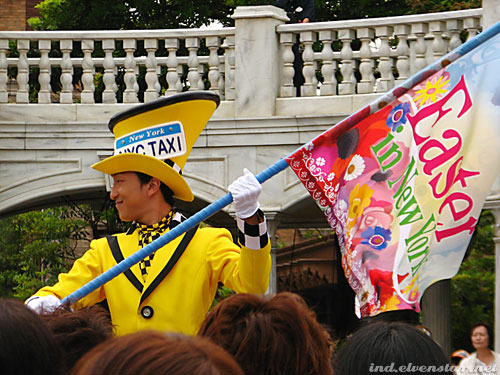 The show begins! (This is probably the closest thing to a parade that DisneySea has…)

The costumes were really rather fun to look at. 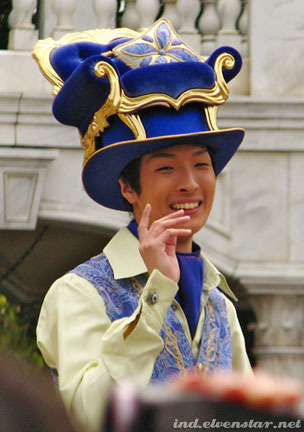 He has a chair on his head… 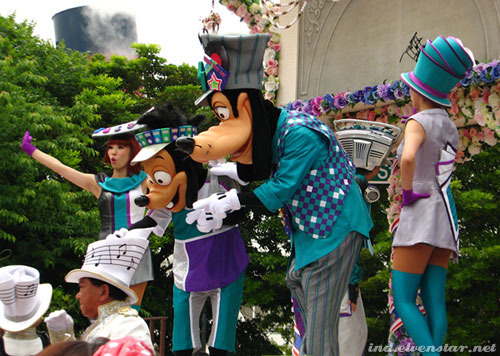 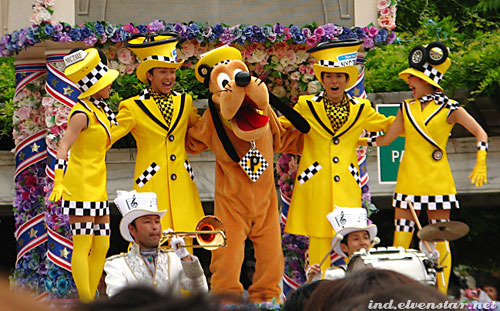 Pluto… and his taxi-themed team. (I did quite like these outfits. The bright and sunny yellow, accented with black and white checks.) 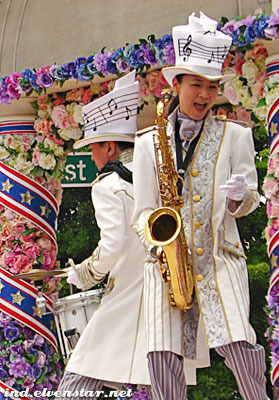 The marching band had nice outfits too although I couldn’t help thinking: Don’t you all feel really hot in that getup?? (It was hot out there, okay? The weather forecast for the day was “cloudy” but all I saw was sun, sun, sun. Too much sun. It was way too hot and I’d left my hat behind (stupidly).) 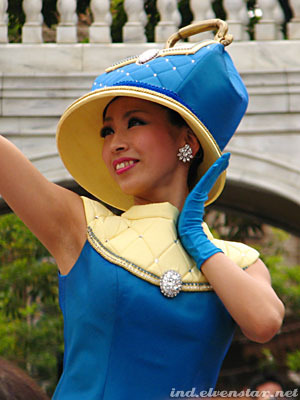 And she has a bag for a hat. The hats in this show were most interesting. hahahah 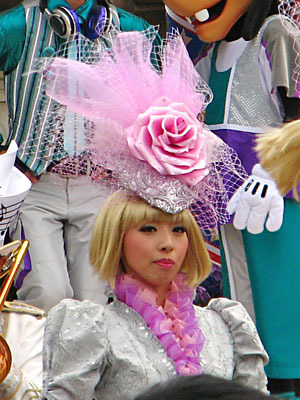 Giant rose hat. Somehow I can imagine people in England wearing a hat like this to the Ascot races or to a royal wedding. (It’s far better than the Philip Treacy horrors the Princesses Beatrice and Eugenie worse to Prince William’s wedding anyway.) 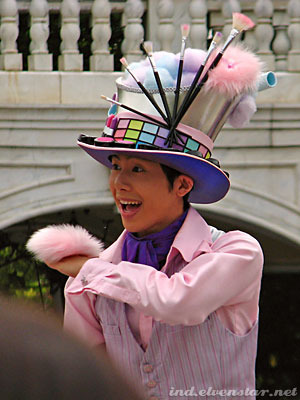 This guy is wearing a hat of makeup tools… Hm. lol. 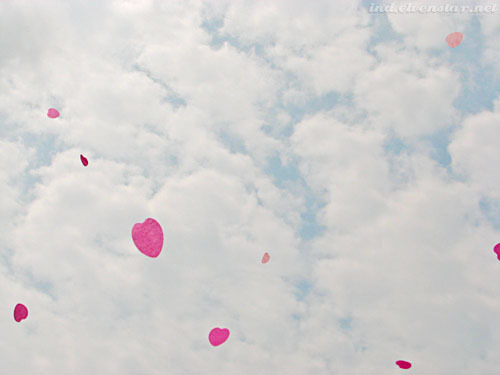 Paper sakura petals fall from the sky~ I thought it was a rather nice little touch to have that instead of regular confetti.

A non-zoomed in picture. I didn’t have a particularly god view.

But a fine example of Japanese politeness and obedience to the rule here. Those sitting down were told to please refrain from raising cameras above head level so as not to block the view for others andas you can see there, everyone’s more or less keeping their cameras at about head level. (They also ask people to close umbrellas and take off big hats when the show/parade begins, and people do very nicely oblige.) 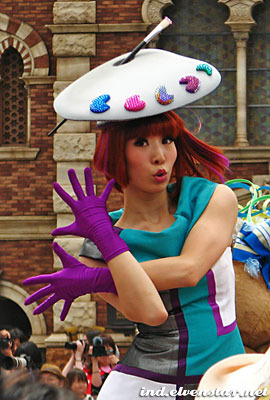 And now an artist’s palette and brush for a hat. haha 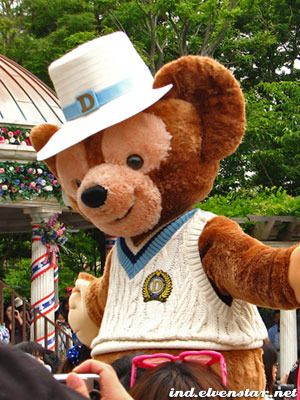 This is Duffy, DisneySea’s mascot. 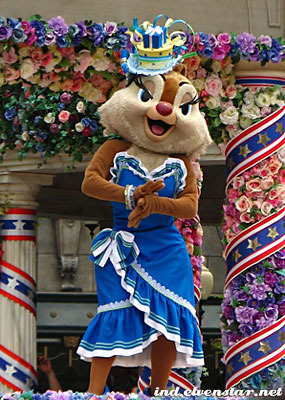 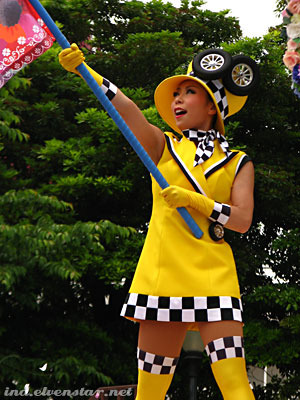 More of that night bright yellow outfit I like! 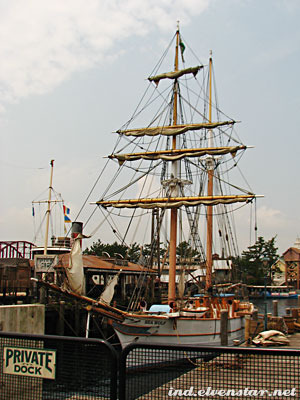 After the show we wandered on… This is a ship docked in the American Waterfront. Just for decoration, I think. It isn’t aride or anything.

At Mysterious Island, we decided to try the 20,000 Leagues Under the Sea ride. No, it wasn’t in that cool-looking submarine. That one’s just for show. 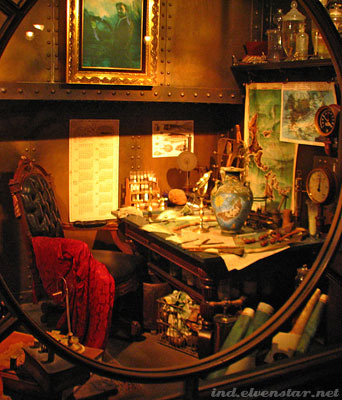 The queue was one of the shorter ones, for sure – only about half an hour. Along the way they have little sections like this set up so you have something to look at while waiting. Nothing happens, though. It’s just little set scenes. I think this was Captain Nemo’s study.

The ride itself was disappointing. It wasn’t a roller coaster-type. You just get into one of the little pods and it takes you through little scenes of marine life and an Atlantis-type section with weird creatures. The scenes of marine life aren’t even real. Just mechanical fish. -_- It was nice to be underwater for the ride, but it was just a rather dull one on the whole. 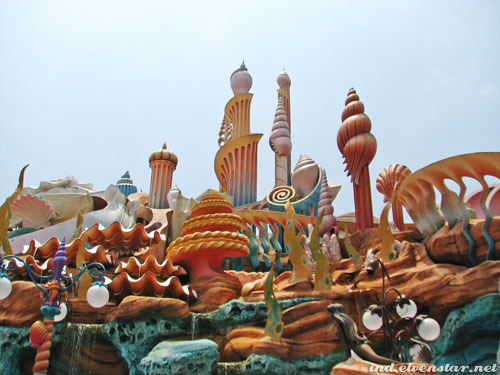 At Mermaid Lagoon. We decided to give all the stuff in Mermaid Lagoon a pass because the rides looked rather kiddy-ish. If I ever get to go back there and have more than one day to go around the Disney Resort, I’d like to try some of the rides there though. They might not be as kiddy-ish as I think. 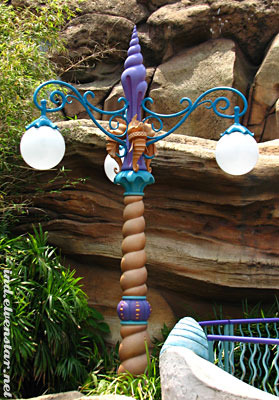 I like how the lamp posts match the section of the park. 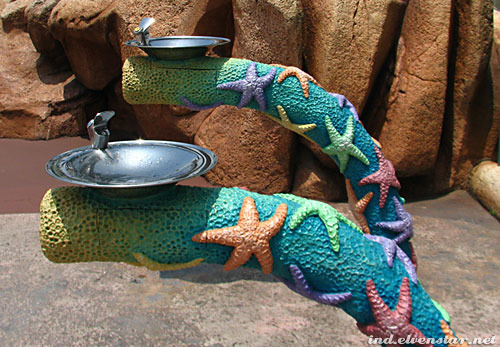 The drinking fountains too! 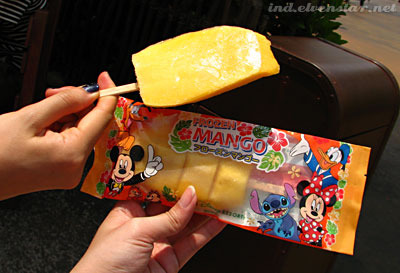 We stopped to have frozen mango as a snack.

Part 3 to come… The Legend of Mythica.