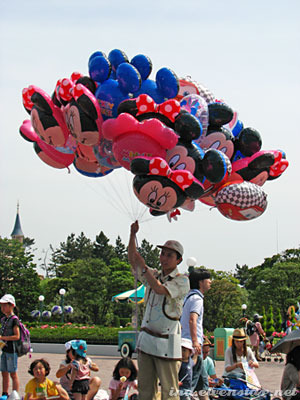 I bought lunch at Huey, Dewey and Louie’s Good Time Cafe in Toontown and then walked down to Cinderella’s Castle to find a good spot for parade-viewing. I found an excellent spot, a “front row” seat on the sidewalk, with perfect view of the castle and also perhaps the widest possible view of the parade to come. 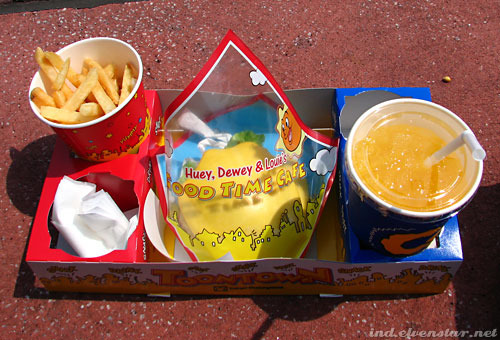 Lunch! Fries, orange juice and a burger. The burger was a “Donald’s Burger” which had shrimp cutlets in it. I’m quite sure the “buns” on top and below the cutlets were not bread, but something egg-based. It tasted pretty good anyway.

… I sat there on the pavement in the hot, hot afternoon sun, yes. And just for laughs, this is what I looked like about half the time I was sitting there prior to the parade: 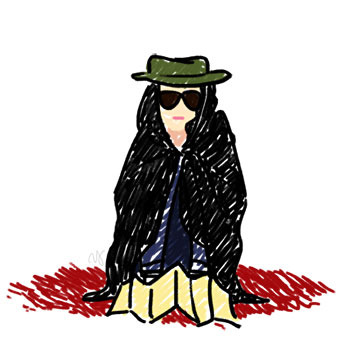 It was so hot that having the hat (which I’d bought at DisneySea) on just wasn’t enough. I had my long black cardigan with me, which proved useful because of its length and the hood-thingy around the collar. It meant I could wrap myself in it as protection from the sun – brought the hood part up to rest over my head and had my hat on top of that. hahah It was really warm underneath that but it was better than getting completely sunburnt.  Hat, sunglasses, black cardigan-turned-wrap, and I used the Japanese version of the Disneyland map to cover my sandal-clad feet. Might as well have been wearing a burqa.

I couldn’t really sit wrapped up like that when eating or taking pictures, of course. That was just when I wasn’t doing anything except fiddling with my phone or watching people. And watch people I did. I had an hour to kill, after all. And if I got up and walked away, I’d lose my very nice spot. So I stubbornly sat there and roasted myself in the sun, taking pictures of people around me. 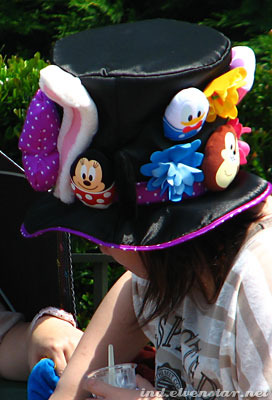 That is quite a hat… It looks heavy too. 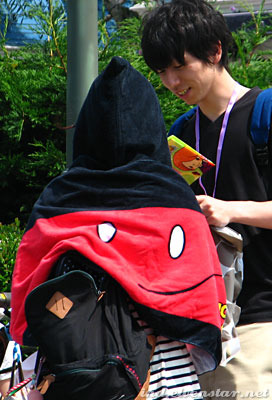 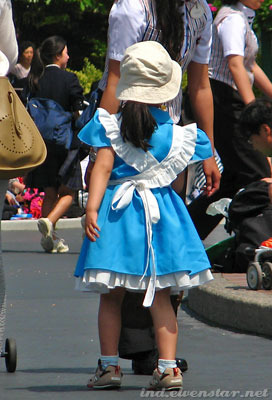 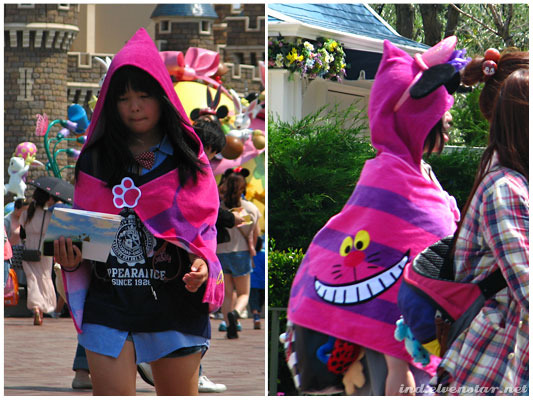 Another hood cape thing, but this time it’s the Cheshire Cat. 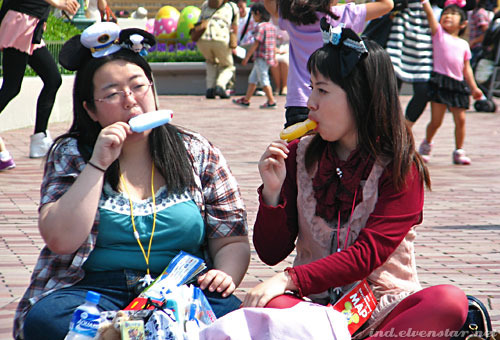 Two friends enjoying ice-cream while they wait for the parade to start. 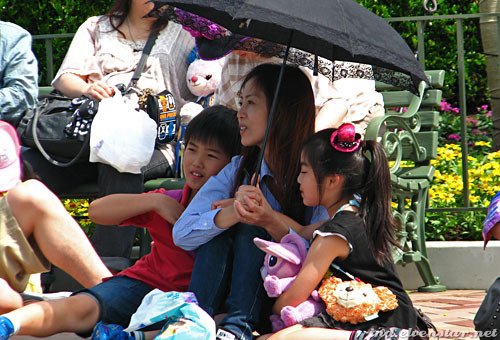 Family under the umbrella. 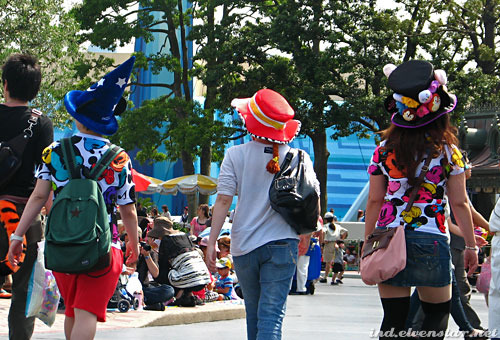 Hats! The Sorceror’s hat, Jessie’s hat (complete with false braid at the back; haha) and another top hat covered with stuff. 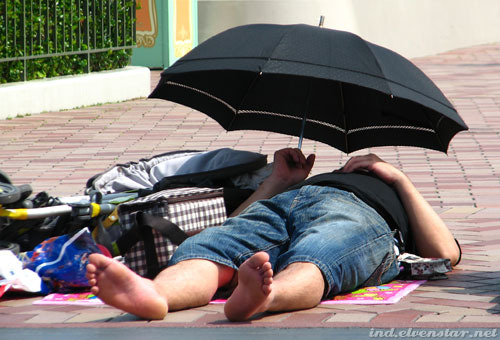 A father kindly holding the fort for his family… who, I presume, were off elsewhere while he dozed on the sidewalk.

(If you see people taking out mats to sit on, that means it’s about half an hour to the show. You can sit down anywhere on the sidewalk along the parade route at any time, but you’re only allowed to take out your mats and such half an hour before the show starts. The Cast Members will announce when you’re allowed to do so.) 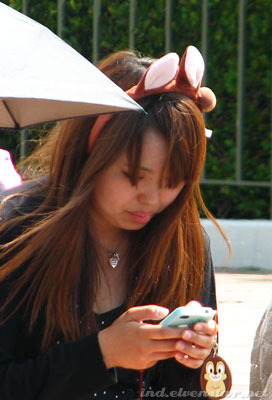 Chipmunk ears on a hairband. And she has a chipmunk phone strap too. 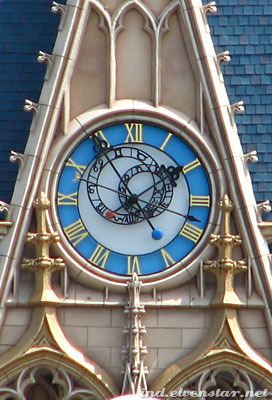 Almost 2. Nearly time for the parade! 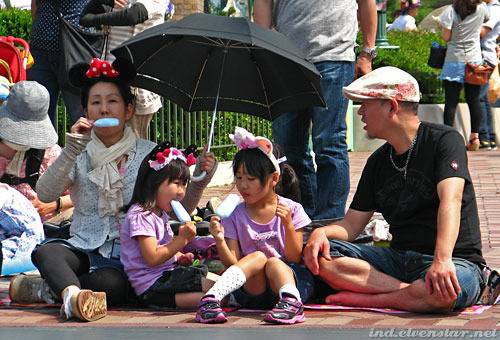 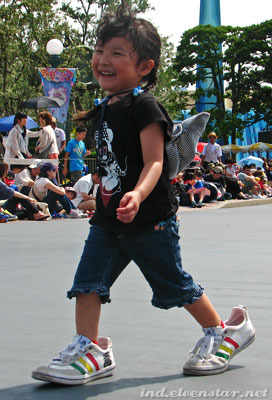 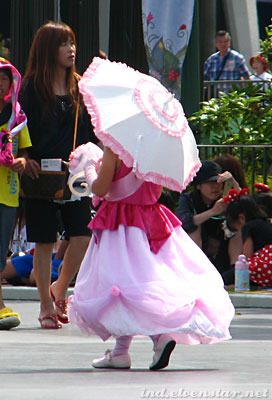 A little Aurora, with a frilly pink umbrella to match her dress. 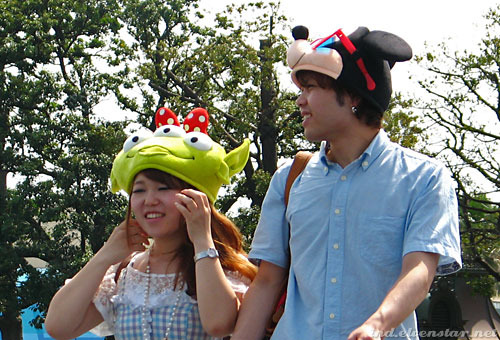 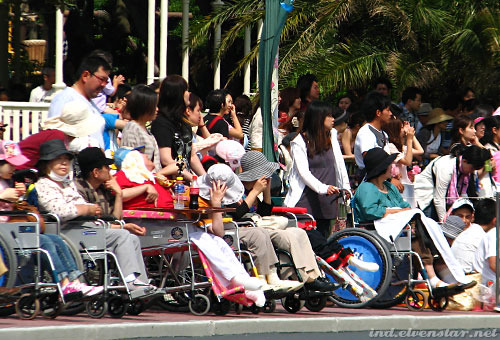 There was a special area reserved for people in wheelchairs.

Ok, enough for now. Pics of the actual parade to come!