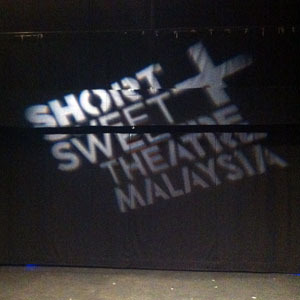 I went to see SHORT+SWEET on Thursday night.

Here’s the description from their blog:

Short+Sweet is the biggest short play festival in the world. First produced at the Newtown Theatre in Sydney, Australia in 2002. This year happening in Kuala Lumpur AND Penang with a BRAND NEW category: STAND-UP COMEDY! The Festival will mark its 5th year in two most prestigious theatre establishment in the country, The Kuala Lumpur Performing Arts Centre –klpac and Performing Arts Centre of Penang (penangpac).

In KL there are to be 4 different categories but in Penang it’s just dance and theatre. I went to the latter show. There were 11 skits in all and here’s what I thought of them:

Overall it was a good effort. I thought the acting was in general far better than the scripts. I’m not fond of depressing stuff in general so having 8 that were on the really serious and/or grim side was not really to my liking. Of the non-grim ones, the first was too crazy, the second was pointless and the third was just right. So I only really liked Small Talk Really Stinks but I think it was clear that everyone worked really hard and it shows. Nice to see that there’s quite a bit of acting skill around. Now we just need to improve the writing and directing part.