So I was down in KL for the weekend for the wedding of Joash and Su Chen. 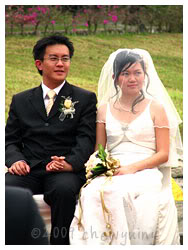 Actually arrived there late (that is, when Su Chen was walking down the aisle) because we took a wrong turning somewhere and in KL, wrong turnings are absolutely lethal. You think you’ll make it on time, but miss a turning or take the wrong one and there goes your schedule because it’d probably take you an eternity to find a U-turn. -__- 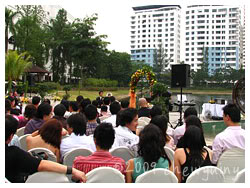 And when I got there and discovered that it was a garden wedding, I instantly regretted my choice of dress. A bright red dress is not the smartest choice for a outdoor event in my opinion. It draws waaaay too much attention (for my liking). I’d been under the impression that it would all be indoors and with yellow lighting, the red wouldn’t be so striking. If I’d known, I’d have picked a different outfit… oh well. It was a beautiful setting anyhow!

Pity I didn’t get really good shots of the place – ended up being too busy talking to people after the ceremony to take many photos. The lake and the greenery around it made a pretty backdrop for a wedding. Since it was out in the open, there were quite a few other hotel guests and tourists who stopped to watch and take pictures. It was kind of amusing to see these Middle Eastern tourists taking photos of the whole ceremony (and one lady even sat on the stairs leading down to the lakeside throughout the entire thing – sermon and all! hahah).

I was quite thankful that my camera has a good long optical zoom – at least I can take relatively decent-looking photos even when I’m far away. (I don’t really like moving around to try and get good shots at weddings because I don’t want to get in the way of the official photographers – no matter how much I may be itching to get closer to the subject(s).) 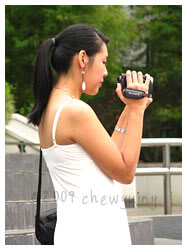 Leona with the camera! (I like how this shot turned out.) She was so busy that she didn’t even notice that I was at the wedding until the dinner later. lol. 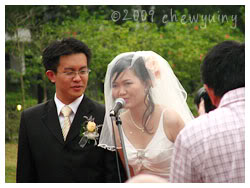 After the ceremony, we adjourned to the ballroom – or just outside it anyway – to have drinks and chat before dinner. That was fun. Yakked away, caught up with people, and repeated umpteen times that “I’m teaching now… at a small college in Penang…” 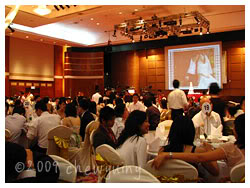 The ballroom …and the beautiful backdrop that was hidden until nearly the end of the dinner! The projector screen hung down in front of it nearly the entire time (because of the videos and all) so I had no idea that the backdrop behind it was that nice. Kind of a waste… but then the videos were fun to watch 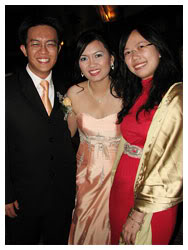 I managed to grab a photo with the happy couple~ 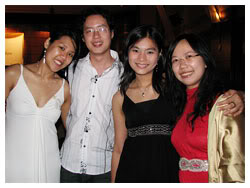 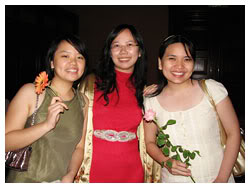 A couple of my nicer photos – with the ex-housemates (sans one)! And with Jo and Lianne

I kind of wish I’d taken more photographs, but can’t be helped now. I shall try to take more at John and Mei Sin’s wedding next month!