Yup. This is it. The new home of Ind Elwen Tinúviel. Nice? Nice?

It’s actually been around a short while. I’ve been beta testing it with a few select people for a couple of months and I’m finally ready to open it to the rest of you! My Tabulas blog remains, but on “Friends Only” mode. So change your links!
Why the change? Because since I have my own server and domain now, I figured I shouldn’t waste them.

I shall open this blog with a flurry of different topics.

I. The Working Life.
Haven’t been blogging about work over at Tabulas, but have been doing so here. So you can check out my previous posts here:

II. Look at all the Pretty Lights…
The Bukit Jalil stadium was full of colourful lights every night for almost two months, with the Asia Cultural Lantern Carnival 2006 being held there. Syaz and I went there last Wednesday after work, cameras in hand. It’s been so long since either of us went on an all-out photography trip. I took over 130 photos (not including the 20+ that I deleted at the carnival and after it). 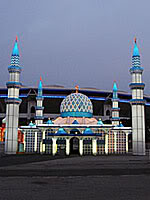 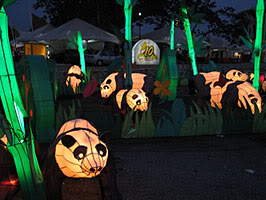 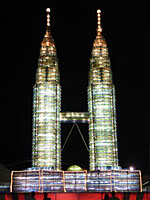 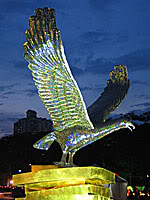 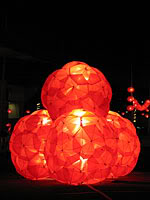 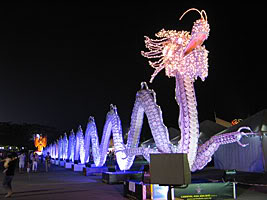 Some were made of the most interesting things… The Twin Tower replica was made of small glass bottles with coloured liquid. 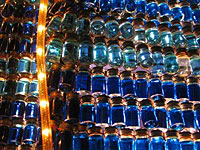 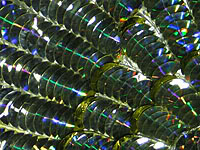 … the bright red-orange balls were made of umbrellas… 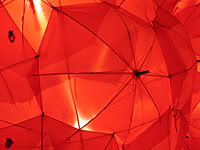 and the dragon (okay, so this one wasn’t really a lantern either) was of porcelain plates, cups, bowls and soup ladles. 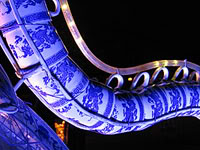 One of the displays I liked the most was one where they had lanterns in water – on the water, rather. 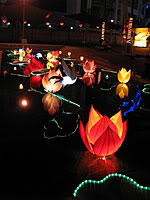 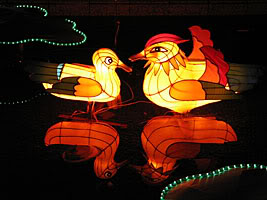 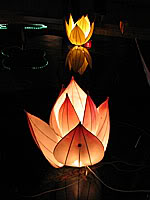 For some reason, I like the almost abstract look this pic has… 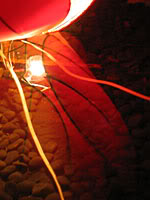 There was also an acrobatics and martial art display going on, which we watched for quite some time. Was entertaining, except that the music was too loud and kinda annoying after a while. 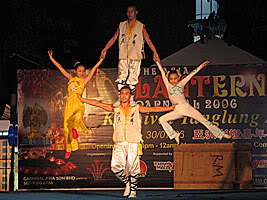 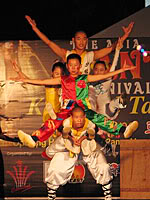 So that this post doesn’t take up too much space, I’ll split it. Click the link below to continue reading about the star sightings in Astro and my reviews of Dragon Tiger Gate and Jasmine Women. (I’m starting to think I should have a separate blog altogether just for movie reviews… You think I should? Ahahah)

III. Of Gates and Flowers
I saw two Chinese movies in the cinema within the same week. That’s a personal record.
Just because I’m not fluent in Mandarin or Cantonese doesn’t mean I don’t like to watch Chinese movies at all. (I just require subtitles.) If I didn’t, I wouldn’t have gone to see Kung Fu Hustle or Seven Swords. Nor would I have watched Sammi Cheng’s Summer Holiday or Shaolin Soccer. (Both of which I quite liked, by the way.)

On Thursday, I ended up with four free passes to see Dragon Tiger Gate at Times Square, thanks to Jason Ding, who couldn’t – or didn’t – want to go and gave me the ones he had. I spent the entire afternoon sending SMSes to see who’d like to go and eventually ended up going with Lydia, and my ex-classmate Steph and her boyfriend John.

The movie itself wasn’t particularly great, but I admit that I thought it rather entertaining. This is probably because I didn’t go expecting much of a story. I just went to see the fight choreography. (Two main reasons I watch Chinese shows: the fight choreography and/or the laughs. Story factors in very little. Hahah) The fight scenes, choreographed by Donnie Yen, were good. Interesting sequences, and not too much over-the-top – until the ending.

There were some interesting camera angles in the movie that I haven’t seen used for certain scenes before – or at least so rarely used that I don’t recall ever seeing them – like an aerial pan across three rooms during a fight. And I didn’t realise how much of an illusion of camera movement a direct downwards shot in rain could produce. There was also an interesting use of a sort of montage in the later half of the show that I thought really helped accentuate the feeling in that particular scene, instead of coming off as cheesy.

Technicalities aside… The main characters’ hair fascinated us. Especially Shawn Yue’s. Not only was it silver, but it was styled in such a peculiar way – and stayed that way throughout the movie. So anime-esque. LOL. We took one look at the character and pronounced him: “So anime!!”

Conclusion: You probably shouldn’t bother watching the show unless you’re really interested in watching the fight sequences. And I think Donnie Yen looks like a horse in this movie.

A couple of days later, I went to catch Jasmine Women at 1U. It’s not a particularly hyped-up movie, so you may not have heard of it. I didn’t, until I went to Cineleisure to buy tickets for Pirates 2, and saw the trailer. It looked somewhat interesting – not “I-must-must-must-see-this-show”, but more like “hmm-this-looks-interesting-think-I’d-like-to-see-it.” 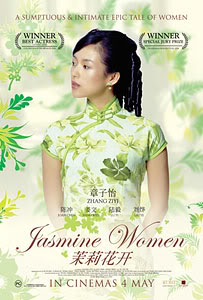 Almost like Amy Tan’s The Joy Luck Club in a way, Jasmine Women tells of three generations of women who each seem to repeat her mother’s mistakes. Costly mistakes, since the one thing they all share – besides looks – is fairly bad taste in men. Moving from the 30s all the way to the 80s, the story starts off with the girl Mo, and goes on to her daughter, Lily, and lastly to her granddaughter, Hua. (Actually, Lily picked a fairly nice guy, but she was really quite neurotic.)

The movie’s a complete opposite of Dragon Tiger Gate. Not for the action-loving moviegoer at all. Drama and (sad) romance are the focus of this movie, whereas action, action and action seemed to be the focal point of Gate. While Gate has a happier ending, Jasmine keeps its melancholy tone most of the time, only lifting ever-so-slightly at the end. But not by much. At a particularly dramatic part, one of my companions leaned over and whispered, “You didn’t tell me this was a sad movie!” I could only say truthfully (and a bit ruefully), “I didn’t know!”

The direction and art direction for Jasmine was good; the detail in the period sets and costumes being one of its strengths. The recreation of the 30s era, then the Communist times, and then the 80s was pretty accurate. I really liked the way the movie looked. There was ‘atmosphere’ in the scenes, even if there was a bit too much melodrama. But the melodrama fits the tragic stories.

(It’s interesting to note that the characters’ names, when strung together, form the Chinese word for “jasmine flower” – Mo Li Hua.)

In terms of acting, it was quite good too, I thought. Zhang Ziyi played the three main roles: the younger version of Mo, her daughter, and then the granddaughter. Zhang showed quite a bit of range, from the naive young thing shot to sudden fame, to the neurotic and very jealous wife, and the determined, modern girl. Joan Chen was equally – if not more – impressive as Mo’s stern, bespectacled mother, then as the older, wiser and more worldly Mo, at the same time stuck in her memories of her youthful fame.

Conclusion: Not a bad watch, if you can stand the drama of it all. Good cinematography and direction nonetheless. (Zhang and Chen look a great deal better than Donnie Yen.)

Other reviews to check out: “Jasmine Women” on movieXclusive, “Dragon Tiger Gate” on The Star Online

Eek. That was long. I’ll make this last part short and quick.

IV. Star Sightings
In these past 6 weeks or so at Astro, I have seen:

I did not talk to them. I just saw them. Not met them, k? Which of them is gonna talk to a lowly intern? Ahah…