… was not a miserable wreck, thank goodness. 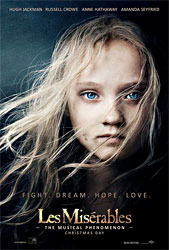 An adaptation of the successful stage musical based on Victor Hugo’s classic novel set in 19th-century France, in which a paroled prisoner named Jean Valjean seeks redemption. (Synopsis from GSC)

Look down, look down

From the impressive opening sequence to the bittersweet, teary end, Tom Hooper’s Les Misérables is a visually stunning adaptation. He uses two things to great effect: camera and colour. In the opening number the camera glides down past a great ship and into the port to focus on the convict-slaves who are hauling it in – “look down,” goes the song, and so down the camera goes, pulling your focus away from the massive ship and into the faces of the convicts down below; a particularly good example of the swooping camera moves used fairly often in many of the ensemble sequences.

Most of the time, the camera is used effectively and efficiently, with eye-pleasing compositions. There was a lot of handheld camera movement, which I could have done without, but it wasn’t so bad that it was distracting. The camera guides the viewer through numerous long takes, moving in towards the actor(s), following them around and pulling out when needed. I’m not a great fan of many long takes (especially when applied without use of a tripod) but this is probably the result of the director’s wishing the actors to sing live on set as you can’t exactly ask someone to sing half a line several times over whilst you shoot one angle and then sing the other half of the line as you shoot from another angle. That would ruin the continuity of the song.

The first song begins with: “Look down, look down, don’t look ’em in the eye.” But Hooper seems to be saying: “Nope. Look ’em right in the eyes!” Close-up shots are his preferred choices for the solos and whilst in some places this is effective, overall I thought the close-up was overused. It is an interesting reversal of the theatrical setup – in a theatre, slight actions are lost of the audience due to the distance between your seat and the stage, but in a movie, the camera can get within inches of the actor’s face and every twitch is magnified on the big screen. So you see clearly the anguish in Valjean’s eyes, the agony of Fantine’s degradation written all over her face, Eponine’s heartbreak, Enjolras’ grim determination in the set of his jaw. But I think it was a little bit too much. The songs of Les Mis are expressions in themselves – the music, the lyrics, the singing and the acting are enough to push the emotion through. I didn’t need to stare the actors in the eyes all the time to get what they were feeling.

The colour of the world is changing day by day

I have to say that I did like the use of colour in this film. (Yes, I must note colour. I like colour. It’s one of the things I notice most about anything I see.) There was a lot of brown and blue and grey… which makes it sound like I’m describing just about every Christopher Nolan film, but the difference here is that the colours were more saturated and there were plenty of brighter accent colours scattered throughout, especially in the costumes. In particular, Fantine and (adult) Cosette are made to stand out through their costumes. Fantine begins with a demure pink dress under the standard blue pinafore that automatically sets her apart from other factory workers, and Cosette appears in white more often than any other character, which makes her stand out in any scene and also helps to show how Marius notices her so easily – the figure in white (and blue) amidst the dirty browns and greys and other duller colours.

I would probably need a second or third viewing at a later time to properly assess all the colour details in the film, but at the moment it’s enough to say that I thought colour was put to good use in it.

Do you hear the people sing?

The singing was what I was most concerned about prior to seeing the movie as only Anne Hathaway and Samantha Barks had impressed me in the various clips that appeared online before the movie’s release. After seeing it, I find that my initial impressions remain. Anne Hathaway does very well as Fantine and Samantha Barks is a brilliant Eponine. Hugh Jackman sings well, but I was unable to really like his renditions of the songs, least of all “Bring Me Home.” I felt it didn’t seem as poignant as it could have been. Eddie Redmayne was all right and Amanda Seyfried didn’t impress me. But the one really sore spot was Russell Crowe as Javert. He appeared stiff and sounded stiff, and this did not sit well with one who is accustomed to hearing more powerful and somewhat more emotive Javerts. Javert is legalistic and hard, but he is supposed to experience emotional turmoil towards the end after unexpectedly being shown mercy. I didn’t feel anything of the sort from Crowe, despite the close-ups of his face.

You can tell which of the main cast comes from a theatrical background; their singing gives them away – Samantha Barks played Eponine at West End for a couple of years and featured in the same role at the 25th anniversary special, Aaron Tveit (Enjolras) was Frank Abagnale Jr. in Broadway’s Catch Me If You Can, and Colm Wilkinson, the kindly bishop here, is the original Jean Valjean on both Broadway and West End and has played the Phantom in The Phantom of the Opera. To their credit, they’ve managed to transition quite well from stage to screen. Hugh Jackman has theatrical credits too but I get the feeling that here he was more focussed on the acting part and in doing so, translated the songs slightly differently. (It’s not a bad thing at all – I merely have a preference for the “proper” stage versions of the songs.)

At the end of the day

The movie is fairly faithful to the stage musical, although they did change a few things – e.g. Eponine finding and keeping Cosette’s letter to Marius, only giving it to him before she dies, and thus Marius sends his response to Cosette through Gavroche; vs. the stage version where Cosette writes no letter to Marius and instead Eponine delivers the letter from Marius to Cosette. (I was not too fond of this change since it made Eponine seem a bit mean whereas she is more self-sacrificing in the original musical.) But some of these changes are apparently more similar to the novel – in a sense going back to the original source. I’ve not read the novel, but I looked up a summary or two and that seems to be the case.

They also added a new song for Valjean (“Suddenly”), shortened several songs, and dropped Thernadier’s solo (“Dog Eats Dog”) completely but I have no problems with those changes. I never did like Thernadier’s solo in the first place. haha

Most importantly, the movie retains the heart and soul of the story, which is Valjean’s redemption and rise from the darkness. One thing that struck me about the stage version was that it was a rare example of religion and religious figures being shown in a positive light. Too often Christianity – and religion in general – gets ridiculed in the media or scorned or made the butt of various jokes. And perhaps the best thing about Les Mis is that it is not totally one-sided. You have the good examples of Christians (the kindly bishop and Valjean) and the bad ones (the hypocritical Thernadiers and Javert who is so legalistic he fails to see that grace and mercy is just as important as obedience to the law). Yes, in the end it sides with the good guys, the “good examples”, but even so Valjean’s struggles in life show that it isn’t an easy path to walk and that is a truth to which most Christians can relate. Ultimately the story is about one man’s redemption through grace and mercy and how he in turn impacts the people around him thanks to that same mercy. And I’m glad that was not wholly smothered out in the adaptation.

I still think Les Mis works better on stage than on screen, but maybe I’m blinded by my affection for the stage version. Nevertheless, I still got misty-eyed at various parts (almost every line Eponine sings makes me cry, and the ending produced tears as well) and quite enjoyed the film. People who haven’t seen it on stage or who aren’t as attached to it would probably like the movie far more than I did. All things considered, it is a pretty good cinematic adaptation of a beloved musical. Some things worked well, and some didn’t but hey, no movie is perfect, right?