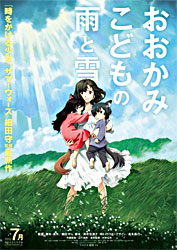 Hosoda Mamoru’s latest piece, Ookami Kodomo no Ame to Yuki (henceforth Wolf Children for short), is the story of Hana and her children. Hana falls in love with a wolf-man and they have two children together – Ame and Yuki. Though the children are the titular characters, the story is really about Hana and her struggles trying to raise two half-wolf children alone after the wolf-man dies.

Hosoda has made several other well-known and well-received animated films, the most famous of which are The Girl Who Leapt Through Time (2006) and Summer Wars (2009). Wolf Children is nearly as good as Girl Who Leapt Through Time, and a little better than Summer Wars – just a little. I thought that the story, narrated by her daughter, Yuki, was fairly solid until the third act, when it seemed like the focus suddenly shifted to Ame and unbalanced the ending. If not for that, this would definitely be a step above Summer Wars.

The overall tone of the film is a gentle, determined one. Hana is a sunny soul, always trying to look on the bright side and keep up a cheerful face for her children despite her troubles. And boy, does she have troubles. The death of her partner would have been a severe blow in a normal case, but it is much worse when he leaves her with two young children who’ve inherited his wolfish genes. Her children cannot control their shapeshifting tendencies when they are young, forcing her to keep them away from other people – this creates a host of problems from child welfare officers bearing down on her, to the dilemma of whether she should take her sick children to a doctor or to a vet (she solves that problem in a rather clever way, I must say). Eventually Hana decides to move to the countryside, but instead of avoiding people as she had hoped, she finds that her small town neighbours are intent on being friendly – more friendly than those in her city apartment. There are close calls, but she manages to keep anyone from finding out the secret of her children’s heritage.

Similar to Miyazaki Hayao, Hosoda seems to have the knack of depicting young characters in an appealing manner without making them perfect angels. In Girl Who Leapt Through Time and Summer Wars, the central characters were teenagers but in Wolf Children, the central characters are an adult and two kids. He deals with them deftly all the same – Hana’s personality is made clear at the start and very early on we learn the general personalities of her two kids. Yuki and Ame are growing up in this story, and they grow different directions. Yuki is perky and sociable and embraces her human/wolf heritage easily until forced to confront her fears about being found out by others. Ame is the reserved, “emo” child, afraid of everything and resenting his wolfish side until a near-death experience changes that. There is a rather splendid sequence that shows – without any dialogue – the children in school, over the span of several years, and clearly displays how different brother and sister are from each other.

I would say, though, that Yuki is far more likeable and sympathetic than Ame. Ame comes across as a cold, cold character, and the distant personality doesn’t do him any favours. But a mother’s love transcends faults and when Ame goes off into the forest to see his “Master” (a fox that acts as the forest guardian) in a storm against his mother’s orders, Hana desperately searches for him, neglecting the fact that Yuki is waiting to be picked up from school. That moment detracts from Hana’s hitherto admirable character. And it is also this sub-plot about Ame that utlimately spoiled the flow of the story for me. Because Yuki narrated the story, and up to that point, her sub-plot had (partly because of her personality) dominated the story, the sudden shift to Ame so near the end disrupted things.

Nevertheless, Wolf Children is a really good watch overall. Better than most other animated films released in 2012, I think.