Spent four nights in Port Dickson attending the East Asia Graduates Conference. It sounds formal, but it was more of a camp than a conference to me. heh.

The hotel was nothing great, but it did have a rather pretty view… 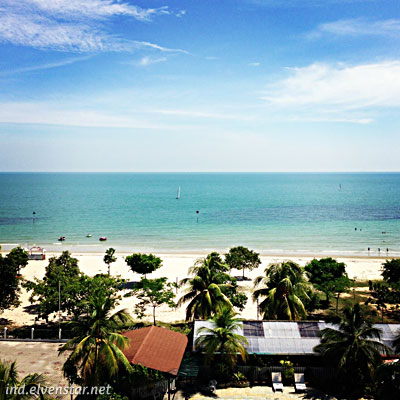 This was the view from the balcony of my room (or rather, the apartment I was put in) on the third day, which was a rather nice clear day. But it was far too hot in general for me to go to the beach. I never once set foot on the sand. hahah Opted to stay indoors and enjoy the view from the cool shade instead. 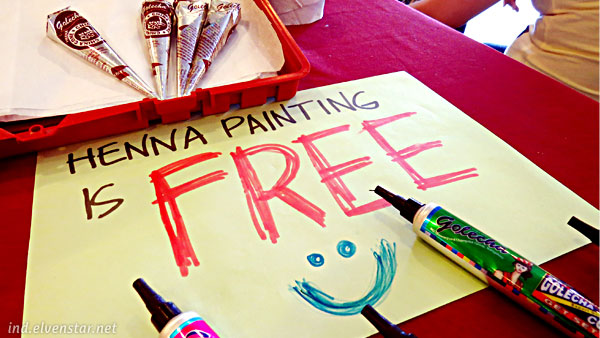 They had free henna painting sessions during the free hours of Day 2 and Day 3. (Photo was taken on Day 3, when most of the delegates had gone off on short tours of Malacca or KL. Only a bunch of Malaysians and Singaporeans chose to hang around the hotel and laze instead. I liked the lazing around.) 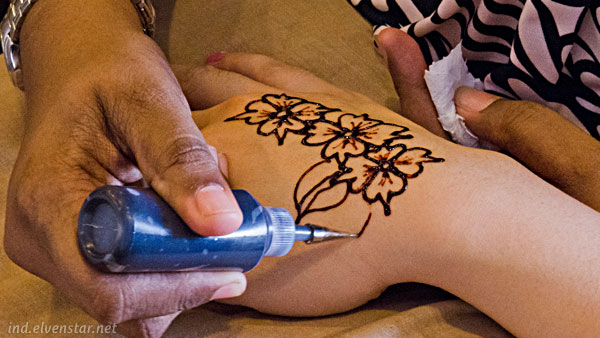 Henna painting in progress. And that’s not my hand… I didn’t get any done. If I had to, I’d rather create my own patterns. haha 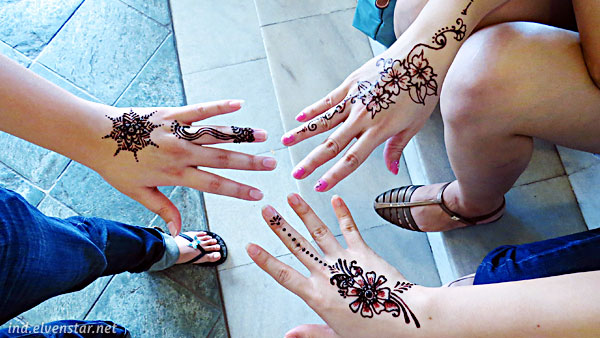 Here are some who did get their hands henna-ed. 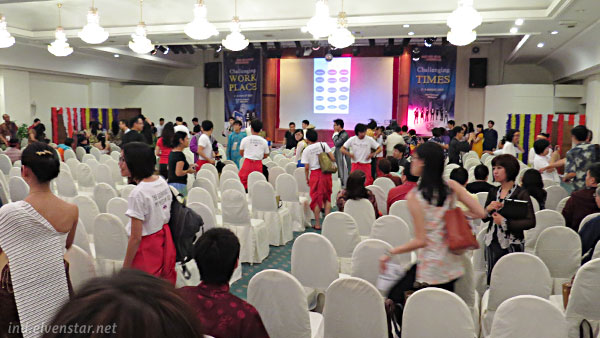 Cultural Night on the final evening was the Big Event of the conference. Everyone (or nearly everyone) dons some form of traditional garb and every participating country puts on a short performance. This is the scene before the evening started – people milling around and chatting and taking pictures.

There were around fifteen countries, with most presenting dances or songs. It was fun!

(In case you start thinking that all we did was laze around and watch performances: there were the standard morning and night sessions complete with small group discussions and prayer after, and workshops in the afternoons except for Day 3 when the half-day tours were held. Lazing around was confined to evenings after the workshops and before dinner. haha) 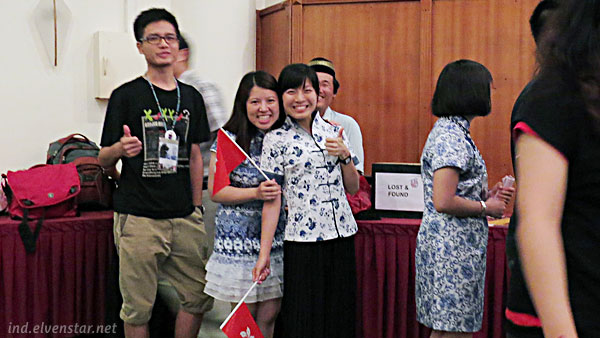 The Hong Kong contingent were the first up, and they looked quite happy about it. hahah 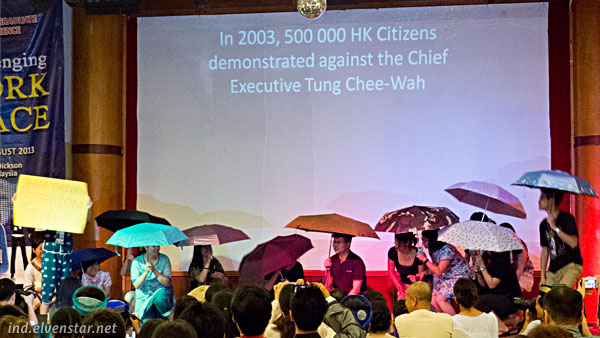 I thought their presentation was amusing. They featured the major protests that have happened there since the handover.

“No brainwashing!” hahahaha So cute, that kid. 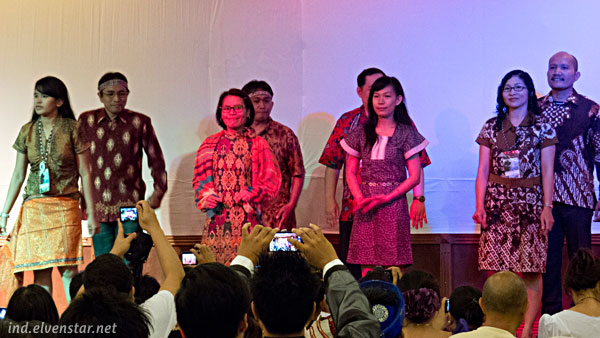 Indonesia did a series of rather cute dances. 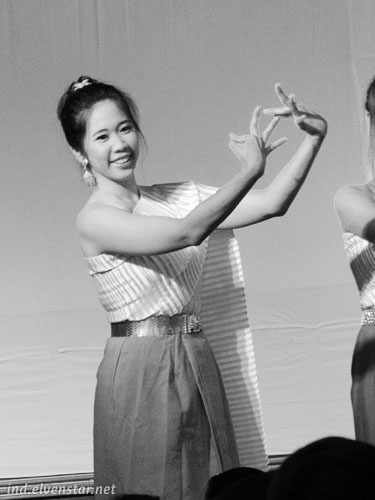 Thailand also presented dance performances. They tried to teach everyone else how to do a Thai dance too.
(I had to make this picture black-and-white because the stage lighting resulted in a blinding, eye-searing pink-and-red look that I simply could not fix. It’s much easier to appreciate in black and white.) 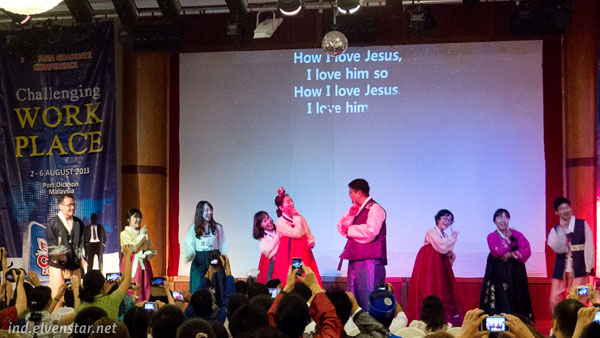 South Korea started off with a little dance…

… and then went into Gangnam Style mode. (Or “Kingdom Style”, as the modified translated lyrics read.) 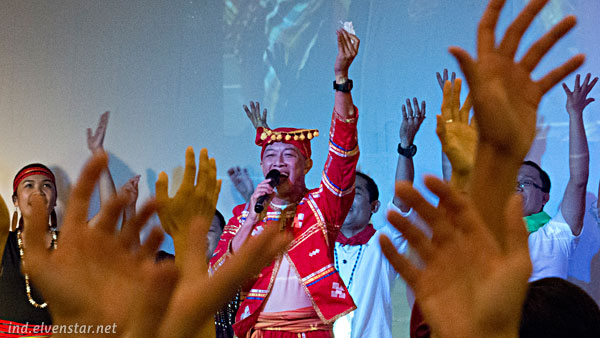 The Philippines presented a dance, and they too taught everyone else simple dance steps. (I like this picture 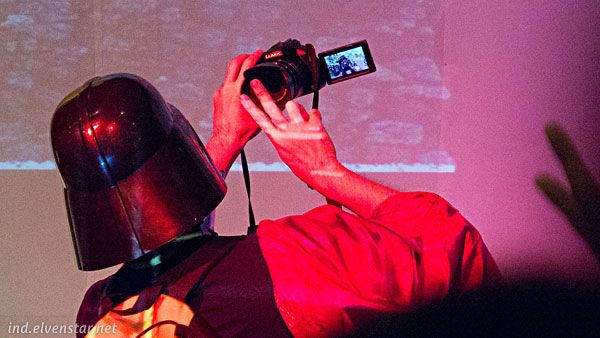 They also gave out cookies, which was a pleasant surprise to everyone but Vader, who didn’t get any: 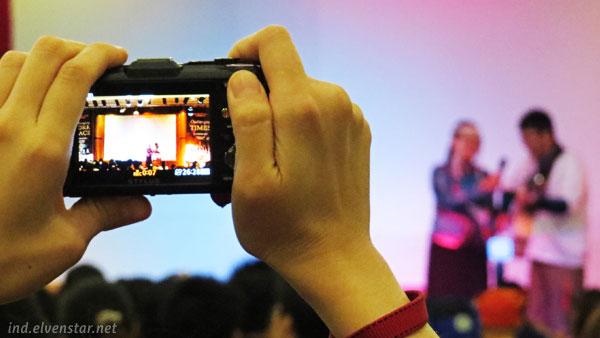 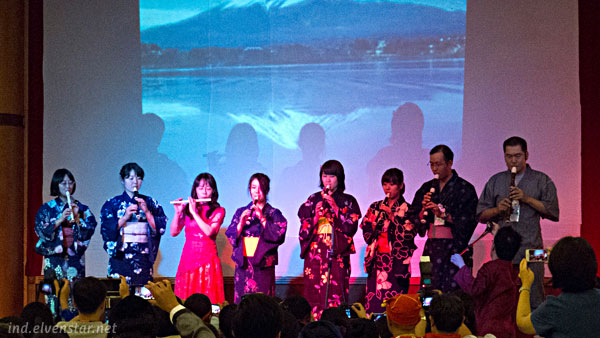 Japan started off with a more traditional dance and a song (“Sakura”) – wowing everyone because so many of them could play woodwind instruments. (Now that I think about it, don’t most of them also learn how to play the recorder in school like we do here in Malaysia? I seem to remember something of the sort…)

Then they made me very happy by starting their “pop culture” segment with the One Piece opening theme song, and including a little Studio Ghibli montage, and singing SMAP’s Sekai ni Hitotsu Dake no Hana. There was also Pikachu, but I’m not a particular Pokemon fan so that didn’t affect me as much. The only way this could have been better to me is if the music during the Ghibli montage had been the Reprise instead of Day of the River, and if they had sung something from a group I like better than SMAP. (Nevertheless, that song is a very nice one…)

After all the performances, it was Let’s-Go-Crazy-Taking-Photos mode. Here’s me with some of my groupmates: 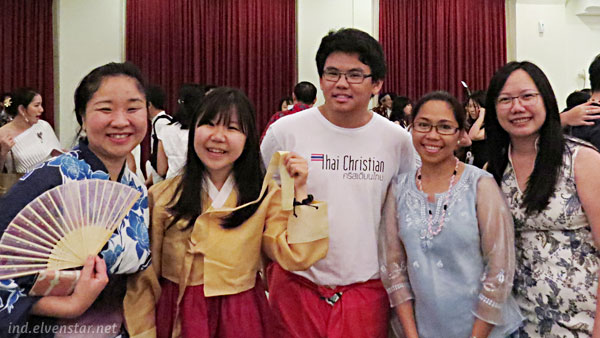 (There should have been nine of us but sadly, we never managed to gather all nine of us at the same time. I think the most we managed was seven? Or eight… I don’t have all the photos in my camera so I just picked the nicest one.) 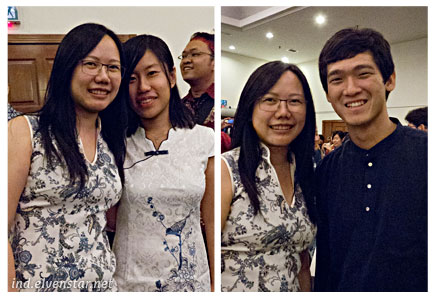 With fellow MMU-ians – juniors who entered after I left. *feels ancient* 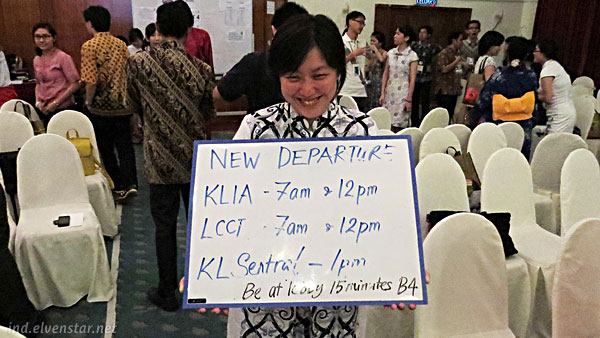 This whiteboard was put to good use on the last couple of days, serving as an extra announcement/reminder board that some poor committee member had to carry around. This time it was announcing the transportation arrangements for the next day.