If you know me well enough (or if you read my blog often enough, haha) the big three “national” cinemas I follow are that of the US, Japan, and Hong Kong/China. It isn’t often that I find a movie remade across all three, and it turns out that Hong Kong’s Infernal Affairs is one of the rarities. Martin Scorsese gave Hollywood its own version in The Departed, and last year two Japanese TV stations banded together to remake IA in two parts – each part to be broadcast on a different channel. This time, the movies, which are directed by Hasumi Eiichiro (Wild Seven), are called: Double Face: Senyuu Sousa-hen, and Double Face: Gisou Keisatsu-hen. (Rough translation: Double Face: Criminal Infiltrator and Double Face: Police Impostor.) 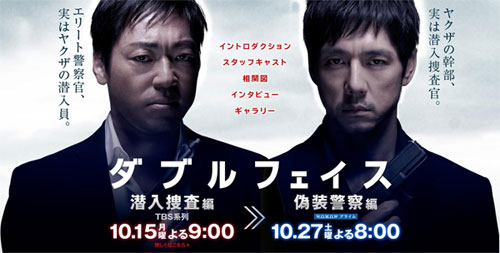 I needn’t go through the story details, I think, as I’ve made it pretty clear from my earlier review/comparison of Infernal Affairs and Departed that I found the story riveting. So how does this match up to the other two?

For the most part, Double Face (henceforth “DF”) adopted the “if it ain’t broke, don’t fix it” motto. It follows the original storyline in IA much more closely than Departed and this is a good thing. I thought the adjustments made to Departed turned it into a rather regular Hollywood action movie, and rather detracted from the unique aspects of IA. Yet despite my knowing the storyline and knowing how it’ll end, DF still managed to convey a sense of tension and suspense, which is pretty remarkable.

I really liked the casting for DF. Here the undercover cop is Moriya Jun, played extremely well by Nishijima Hidetoshi, and Kagawa Teruyuki is the undercover gang member, Takayama Ryosuke. Moriya and Takayama are more like Chan and Lau of the original; they look like they’ve spent years working their way into the system and gaining the trust of the people around them. Nishijima (who is quickly becoming one of my favourite Japanese actors) is great in this role – he has a similar melancholy air about him that really makes Moriya resemble Tony Leung’s Chan Wing Yan. Costigan and Sullivan didn’t seem quite as believable in Departed because they appeared a bit too young and the amount of trust their superiors placed in them felt illogical. (I think Billy Costigan indicates at one point that he’s been on the job for a year? One year. Chan and Moriya were in the gangs for almost a decade each.) Police Inspector Onodera and the yakuza boss Oda are played by Kadono Takuzo and Kohinata Fumiyo, both familiar faces to anyone who watched Japanese dramas and movies.
(Side note: Moriya Jun is on the right of the picture above, and Takayama Ryosuke is on the left.)

The production values on DF were really high. These are basically made-for-TV movies but you can’t tell just by looking at them. DF has good production design and good effects work although it lacks the more sophisticated colour grading choices of IA. IA went for a very cold look – a lot of blue and green tints.  DF took on a slightly warmer colour palette, with punctuations of brighter colours here and there. I liked the music, though I can imagine the argument being made that the music was too obvious and too dramatic. Thumbs-up all round on those counts!

Although DF is very similar to IA, it does have certain differences. They split one movie into two so there was a lot more time to fill – and they filled it fairly well. They mainly chose to build up the “personal relationship” aspect. You get to see more of Moriya’s interactions with Hiroshi (Itoh Atsushi), the soft-hearted junior gang member who looks up to him, and with the psychiatrist Nishida (Wakui Emi). Takayama doesn’t have a steady girlfriend, but Oda orders him to get close to Suenaga Mari (Aoi Yu), the rebellious young daughter of a politician, and in the process he finds himself becoming somewhat attached to her. I think it was a good choice to use the extra time for those things as it served to raise the stakes for both men and gave more insight into their struggles. (I did find Takayama’s attachment to Mari a little bit on the creepy side, since there looked like there was at least 20 years difference between them.)

However, they did waste some time on what at first appeared to be a subplot about Moriya discovering a secret basement room under the kitchen floor in Oda’s home. They dedicated quite a lot of screentime to that in the first movie, and I expected the revelation to be a lot more significant or harrowing than stashes of drugs and guns. It was already established that Oda was the head of the Oda-gumi, who were yakuza drug dealers. So finding drugs and guns in his home was really nothing astonishing. Its only purpose was apparently to demonstrate how solid Moriya’s friendship with Hiroshi is, because Hiroshi refused to give him away and got beaten up for it. But other than that… The secret room thing was pointless. There were also a number of scenes showing Moriya secretly snapping photos of Oda’s activities, but we’re never shown what he does with the photos. That was rather a waste as well.

I say that they made good use of the extra time available in DF to showcase the relationships but I also think that it caused the story to drag a little at parts. IA was very fast-paced and compact because they chose to focus less on the personal relationships of the two lead characters. DF certainly loses out in the pacing department. It also loses out in editing – some scenes lack the snap and sharpness of the equivalent scenes in IA. 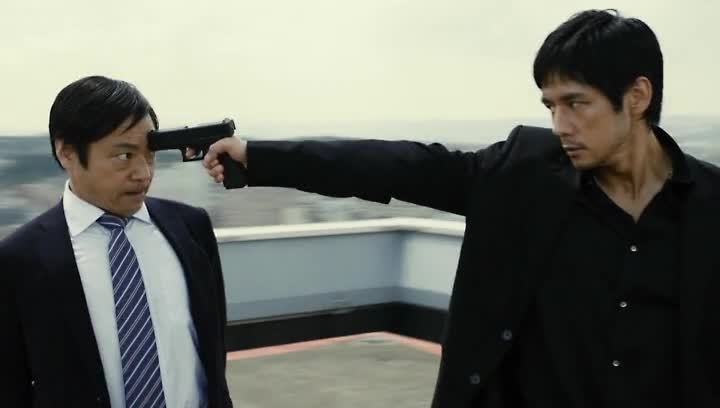 The “threat level” differs in DF. In IA, the threat posed by Hon Sam’s triad gang is “smaller” in the sense that there is no higher aspiration beyong their gang activities, which is mainly drug dealership. In The Departed, Costello’s gang seems to deal with a bunch of stuff, including selling… microprocessors to Chinese gangsters? Well, anyway, it suggests a threat on an international level. In DF, the threat is not expanded internationally (though they do work with Thai drug dealers, just like Hon Sam’s gang) but the Oda-gumi have a ongoing feud with the Black Dragon gang, and Oda also plans to extend his reach into the political sphere by manipulating Suenaga Mari. It’s a common theme with Japanese dramas and films. Where Hollywood likes to position the US as being the centre around which the world’s safety revolves, (and therefore the on-screen threats are often on a global scale) Japan is often concerned about its own internal politics – terrorist threats, politicians or the people close to politicans in danger, or corrupt politicians, etc. I don’t think this affects DF too much one way or another. The scale of the threat in all three movies was not a big issue for me; it’s just an interesting thing to observe.

Then we have the ending. Among IA’s strengths was the philosophical angle of the ending and the seeming injustice of having the bad guy continue to live on with everyone believing his lies. Of course, the closing titles indicate that Lau’s guilt and wrongdoings will continue to haunt him – it’ll be a sort of living hell for him, even though he reinstated Chan’s identity after his death. The Departed went the regular Hollywood way of having justice served in full by not only giving the deceased Costigan recognition posthumously, but also having Dignam shoot Sullivan. But DF… DF surprised me. Moriya died, but he did not receive any posthumous award, nor did Takayama reinstate his true identity as an undercover officer. With the exception of Nishida and Takayama, everyone thinks Moriya Jun was a yakuza, and that he killed his own boss, Oda. This really took me aback. Moriya dies a yakuza, Takayama gets awards and recognition for his contributions? What?! But then the Black Dragon gang turn up one day and Takayama finds that they expect him to work for them now, just like the remaining Oda-gumi men. And so he is trapped once more in the very role he wished to relinquish. 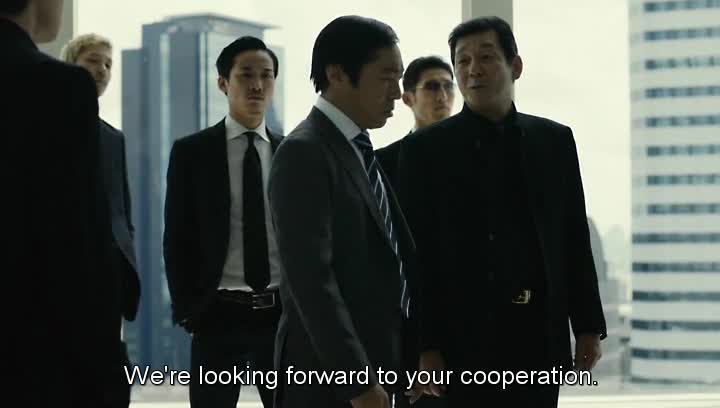 There were quite a number of symbolic and metaphorical shots scattered throughout DF, but the best was surely the ones that closed the second part: Takayama descends in an elevator, there’s a close-up shot of the elevator’s gears turning, shots of Takayama’s empty flat (Mari has left him), and a final medium shot of Takayama laughing bitterly in the elevator as the scene fades to black. Rather obvious metaphors there with the turning gears, the empty home, the elevator going down, and the ending fade out. But it was very appropriate.

I enjoyed Double Face quite a bit. It does not surpass Infernal Affairs, which definitely has the edge over it in many ways, but it comes close to matching IA. That ending, in particular… I feel like applauding the ending for managing to be different from the original and yet ultimately the same. Good job, Japan!