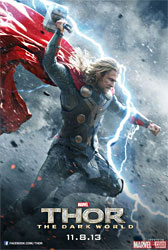 Thor may be the point around which the world (of his movies) turns, but it is Loki who makes it turn at all.

It’s called “Thor” but I have a feeling that half the people who go to see it (like me) really go to see Loki.  This is both ironic and amusing when you consider how Loki’s descent into villainy stemmed from his jealousy of Thor and a feeling of inferiority.

In Thor: The Dark World, or Thor 2 for simplicity’s sake, Thor gets to fuss over Jane Foster again when the long-asleep Dark Elf, Malekith, rises and threatens Jane, Earth, Asgard, and the rest of the Nine Realms. This is all thanks to some vague sentient evil matter called the Aether and an unfortunate occurrence known as the Convergence, when all the Nine Realms line up and overlap each other.

(I’m not quite able to keep spoilers out of this, so if you want to be surprised by anything in the movie, don’t read on…)

Alas, as critics have pointed out, Malekith is a rather boring villain. I would say he’s more of a mere plot device than an actual, effective villain. He’s just there to cause enough trouble that Thor will require Loki’s help and thus get Loki out of the Asgardian dungeons and back into action.

The film really hangs on the success of Tom Hiddleston’s Loki. When he’s on screen, the story comes to life, and when he’s not there, it reverts to “average action movie”. The reluctant and wary buddy dynamic between Thor and Loki makes for some good scenes; they get fun lines to deliver, and I think Tom Hiddleston in particular seems to have really enjoyed the shapeshifting sequence. (I liked that scene for two reasons – the sheer glee that came bubbling forth from Loki, and the Steve Rogers cameo, which was really really funny and came as a complete surprise and delight.) Thor 2 is at its best when the brothers share the screen. Chris Hemsworth and Tom Hiddleston have crackling fun chemistry together.

Frigga (played by Rene Russo), Queen of Asgard, had a larger role here and that’s a good thing. They gave us a glimpse at Loki’s relationship with his foster mother, which appears to have been the one familial relationship he really cared about. For all his blustering and for all his chilly demeanour towards her, there were moments when the mask seemed to crack and you saw that even if he didn’t care about Odin anymore, Frigga still mattered. When she died, it was tragic and I imagine most thoughts immediately flew to the wayward son she’d refused to abandon. What would happen to Loki now that the only person he truly still cared about was gone? Like Coulson’s death in Avengers, Frigga’s death here was the catalyst – the catalyst for Thor’s decision to take action, and for Loki’s decision to lend a hand… before he continued on to his ultimate goal. “Trust my rage,” Loki says to Thor. And that may have been the truest line Loki spoke to Thor in the whole movie. He agrees to help Thor not only because it would get him out of jail and allow him to work towards his true goal, but also because he wants revenge on his mother’s killer.

It’s a pity that the other Asgardian characters – Sif and the Warriors Three – didn’t get much to do. Asano Tadanobu’s Hogun appeared about two or three times in the entire movie! So wasted… I would have liked to see more of their interactions with the newly-released Loki. Of the characters on Earth, only Dr. Erik Selvig (Stellan Skarsgård) is of any real interest and even then he ends up as more of a comic figure. (I never quite warmed up to Darcy, Jane’s friend.) Our first sight of Dr. Selvig is when he’s arrested at Stonehenge for running around and brandishing scientific equipment at tourists – while naked. Apparently Loki’s invasion of his mind destabilised him somewhat… Makes me wonder whether Hawkeye suffered any bizarre side effects too.

I have to hand it to Marvel for keeping the continuity going. The massive battle of New York in Avengers had repercussions of all sorts: Tony Stark had nightmares and panic attacks after those experiences, Jane was angry at Thor for not coming to see her earlier (“I saw you with the Avengers in New York!!”), Dr. Selvig has some mental trouble after having Loki in his head, and when the big battle of Thor 2 is beginning in Greenwich, people don’t run for cover – they whip out their smartphones to take pictures and videos in spite of Jane telling them to run because “Are you kidding? That’s Thor out there!” and they want to witness the action firsthand.

I didn’t find the final battle to be very enthralling, but they did make clever use of the Convergence to have Thor and Malekith (and some random cars) falling in and out of the different realms while fighting, which was amusing and interesting. They should have made more use of it. It would have lent more dimension to what was ultimately not a very exciting final battle.

The faults of Thor 2 lie mainly in its boring villain, and in its derivative visuals. I was not impressed by the production design. I got far too many deja vu-type vibes throughout the movie. The opening backstory sequence felt similar to the backstory of the Ring in Fellowship of the Ring. Even Thor’s first battle in the movie – against some giant creature – felt similar to something in LOTR. I can’t quite pinpoint it right now, but there was something in the scene with the biggest baddest guy striding out amidst the cheers from his fellow bad guys that screamed LOTR at me. Maybe it was because they reminded me of the Orcs and the Uruk-hai.
Asgard made me think of Star Wars, and especially of Naboo. Well, the grand golden palace didn’t remind me of Naboo but certain other scenes did. This was not helped by the presence of Natalie Portman, who is Jane Foster in the Marvel universe, but who also plays Padmé Amidala in Star Wars. That scene with Thor and Jane on the balcony in Asgard? “Anakin and Amidala! In Naboo! By the lake!” was all I could think. The Asgardian skiffs sound design was nearly exactly like some of the Star Wars ships, and the Dark Elves’ ships looked like more slender B-wing starfighters. Then Loki cuts Thor’s hand off (which later turns out to be a mere illusion, but still). Somewhere, Darth Vader and Luke Skywalker’s mechanical hands are twitching at this similarity… It all just reeked of Star Wars. Moreover, the Dark Elves fought with what looked like laser guns. (Why is Asgard so backward? They just use spears and swords. These Dark Elves have high-tech equipment even though they’ve been asleep and in hiding for thousands and thousands of years.) I half expected someone to whip out a lightsaber and start deflecting the gun shots.
I know most people wouldn’t be bothered by the similarities, but it’s very distracting when the movie visually resembles two of my favourite fictional universes.

I shall hope for more in Thor 3.

*contemplates rating for the movie*
I’m going back and forth between 3.5 and 4… Oh what the heck. I had fun watching it, and I would watch it again (because Tom Hiddleston is simply too good at playing Loki, and that Steve Rogers bit cracks me up).
★★★★!