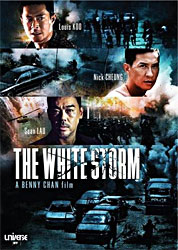 It still seems to shock people that I actually watch non-English movies… I think most of my friends just about fall over if I say that I’m quite willing to watch a Chinese movie. Maybe it’s because I have such an aversion to Mandarin and a fairly tepid regard for most Chinese food. But hey, movies are different! Just give me subtitles and a decent story and I’m okay with it.

The White Storm is about friendship, difficult choices, and gunfights. Lots of gunfights. Tin (Lau Ching Wan) and Wai (Nick Cheung) are police officers in the narcotics department, who are hot on the heels of a local Hong Kong drug lord thanks to their friend Chow (Louis Koo) who has been working undercover in the gang. A last-minute decision from the top brass means that a sting operation has to be aborted and Chow has to follow his gangster boss to Thailand in order to nab an even bigger fish called “Eight-faced Buddha” (Lo Hoi Pang). Chow, already weary from years of pretending to be a bad guy and frustrated with not being able to be with his pregnant wife, resents this very much and almost quits but is eventually convinced by the arguments of ultra-focussed, duty-driven Tin and the more subdued reasonings of the peacemaker Wai to go on this one last undercover job. This proves to have disastrous repercussions as Chow’s wife decides to kick him out of her life, the attempt to catch the big bad boss goes horribly awry, and Tin is forced to make the terrible choice between the lives of his two friends.

White Storm is, by and large, a typical Hong Kong police movie with over-the-top action sequences, heavy emphasis on brotherhood, and a disregard for logical turns of events. (Though disregarding “reality” is something that movies from any other country do, not just Hong Kong. haha) But by inserting a few twists, they managed to shake things up a bit. At the point where Tin and Wai were talking to Chow about the Thailand plan, I became absolutely convinced that Wai was going to die. I thought it was a pity as I liked the character, but if anyone had to die in this movie, it was going to be Wai – being the nice guy in a trio like that practically guarantees your demise in a movie of this sort. So when Tin chooses Chow instead of Wai, it was completely unsurprising. What was surprising was Wai’s return five years later. (He gets shot in the chest and plunges into a crocodile-infested river and survives? Movie logic. It’s amazing.) Moreover, he returns as a subordinate of Eight-faced Buddha – and he’s married to the Buddha’s daughter. (That little revelation was quite the eye-popping moment… But I’ll get to that shortly.) Gasp. So now the peaceful Wai has turned bad? Not entirely surprising. In fact his turning into one of the bad guys was rather expected once we find out that he’s still alive. But wait, no! He’s actually still a good guy! He just pretended to go along with the Buddha’s gang because he had no other way of surviving. And now that he’s back in Hong Kong and has patched things up with his old buddies, he just wants to join them and take the Buddha down.

Weeeelll. That was really surprising. Director Benny Chan did a fairly good job there in fooling us all with the little twists and turns. The overall result was still a typical story (it’s not a patch on Infernal Affairs – no police movie is!) but sufficiently spiced up by the unexpected developments, which were unexpected because the audience expects the standard Hong Kong police action thriller. Funny how it’s typical but not quite typical at the same time.

There were a few scenes that were particularly well done. The scene with Wai’s senile mother and the three of them was really quite touching and made for a more “macho” method of confessing heartfelt emotions. The rooftop scene where Wai holds Chow’s estranged wife and daughter hostage, compelling Tin and Chow to come clean and apologise for all their mistakes that led them to that point, was suspenseful and ended on a surprising note (that’s when we find that Wai’s still a good guy after all). A particularly funny bit came near the beginning when Tin demands to know why Chow hasn’t called them for a while. Chow takes out a bunch of phones and tosses them on the mattress, enumerating their purposes (“This one is to call you with. This is for my boss. This is for the Vietnamese…”) and bemoans the fact that he’s so stressed out he’s afraid he’ll mix up the phones and say the wrong thing one day. Hmm, what else? Oh, the scene where Tin and Wai have a sort of vehicular stand-off, trying to ram each other with their cars, only to have Chow turn up and join in by smashing straight into Wai’s car. That one was kind of interesting.

Apart from those few, not many other scenes stood out. There were just a lot of gunfights, a lot of bloodshed, and each half of the movie culminated in a hyper-dramatic shoot-out. I’m not a fan of that much violence. I cringed and had to look away a few times. (The good thing about movies being predictable is that you know exactly when to look away from the screen. “Oh, it looks they’re going to shoot that guy point-blank in the head. Okay, time to become very interested in the number of empty seats down in the front row…”)

One mistake I thought they made was to have made Eight-faced Buddha’s daughter a transgender character. Or rather, the way in which she was introduced was a mistake. They set up the character as a very minor side joke for a moment but later, when it turns out that she was the one who saved Wai and that Wai had married her, it was obvious that no one in the audience had forgotten that fact and it prompted laughs from everyone. Tin’s and Chow’s shocked stares only added to the comical effect of the revelation. I couldn’t decide if it was supposed to be so funny or if it was inadvertently funny…

That mistake aside, I think they made very good choices in their three lead actors. Their performances do make up somewhat for the other problems. Lau Ching Wan is great as Tin, and Louis Koo did a decent job as the hot-headed Chow. But Nick Cheung stood out the most despite being the meekest character for half the movie – though I’m not sure if this is because he really just outshone the other two, or if it’s just a result of my not having seen him act in years. (I don’t follow the Hong Kong movie/TV scene that closely, and I last saw him in The Legendary Four Aces TV series ages ago where he played my favourite character. Apparently he’s been doing very well in serious movies in recent years though. Perhaps I should go dig up some of those.) I thought he made the drastic shifts in personality – from the quieter, peace-loving friend to the cynical, cold drug lord’s son-in-law – believeable, and inserted enough charisma into Wai so that even before there was much character development, Wai was an appealing character. The “nice” characters can veer into boring and preachy or overly-idealistic. This one didn’t, and that’s a good thing.

I will give The White Storm three stars – for managing to be unexpected, and for having a cast that worked. ★★★