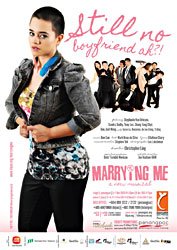 With everyone around her tying the knot, ambitiously single Stephanie just wants to say “I don’t.” But her mother and meddling aunt have other ideas. As tragedy looms, Stephanie is forced to turn to an old flame to make her mother’s ‘dying’ wish come true.

Oh, this deserves an outright “Well done, you!”

Marrying Me was funny and sassy, and infused with at least one sad subplot that will delight those who like things to take a turn for the dramatic. I enjoyed the clever humour – the casual observations of Malaysian life through the dialogue and the speech, the tiny little jabs at some current issues here and there.

The… What’s the word for it…? The format(?) was unusual; instead of the regular stage facing the audience, the stage is in the centre and the audience sits on all four sides. The cast sort of revolve around the stage, so that at different times they face different sides. It was interesting, although I did wish the seats were staggered a little higher because when tall-ish people sit in front of you, they block bits and pieces of the action.

Casting was generally good, I thought. Stephanie Van Driesen plays the lead character and she does very well as the independent, strong-minded Stephanie who dearly loves her mother. But I think Benjamin Lin completely stole the show as Stephanie’s gay “BFF.” He didn’t appear much in the first half, but in the second half he was so very, very entertaining – the exaggerated actions and his little interactions with the audience clearly won everyone over. (His brilliant little quip when one of the lampshades unexpectedly fell down from the ceiling and into the centre of the stage just solidified the general love for his performance.)

I quite liked the songs. Do they have an album out, I wonder? haha The lyrics (by EllaRose Chary) were fun, and the music (by Onn San) was highly enjoyable. I especially liked “Win Win” and “Better to be Strong.” Hilarious songs, both of them. (Yes, I like things to be fun and funny. Real life doesn’t have nearly as much hilarity in it so I like the shows I watch to make up for that lack.)

I only have two quibbles with this show. One is that it took me far too long to figure out what Joel Wong’s character, Ah Hee, was supposed to be. I didn’t have time to really look at the programme and note the character list beforehand so I spent quite a while wondering who exactly he was – was he Gertrude’s son? Her employee? Who? Only later did I realise that ohhh, he’s supposed to be her brother. Perhaps I missed a line of dialogue somewhere that would have clarified it.

Quibble #2 is this: I did not realise that they were okay with us taking photos during the show! Square and I were both extremely taken aback when the director, Christopher Ling, in his thank-you speech at the end, said that if anyone had managed to sneak pictures during the show that’s quite all right provided that they share them on Facebook and Instagram and so on and tag the photos with the appropriate tags. What? Why didn’t you say so?? We would both have loooved to snap a photo or two throughout the show. (And it would’ve been nice to include a couple of pics in this review…) On the other hand, had they said that, it might have been very distracting to see glowing phone screens pop up every two minutes or so. But still!

Anyway, the musical is still on next weekend at KLPAC, so if you can, do go see it!