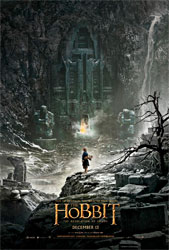 This film should’ve been called “Everyone and the Hobbit” because the titular Hobbit himself barely got half the screentime he should have had.

Many Meetings. Too Many.

Thorin and company finally reach Erebor, the Lonely Mountain, in this film, but not before going through a number of other places, and meeting new friends and foes. The multiple locations isn’t really a problem. What’s problematic is that with each location, the story splinters into more and more pieces as the group gets split up. After Beorn’s house and upon reaching Mirkwood, Gandalf leaves the company and there begins the sub-plot of Gandalf and the Necromancer in Dol Guldur. In Mirkwood, we meet Legolas again and are introduced to the totally invented character, Tauriel (Evangeline Lilly), and original book-character King Thranduil (Lee Pace), who is Legolas’s father. These three characters give us sub-plot #2 in the love triangle between Legolas, Tauriel, and Kili, and sub-plot #3 in Thranduil’s arrogance and greed (a sub-plot that will no doubt be fleshed out in part 3). Once Thorin & co. escape the Elven realm, they meet Bard and go to Laketown, at which point we see sub-plot #4 – Bard (Luke Evans) being a sort of silent rebel and potential political threat to the Master (Stephen Fry) of Laketown. When setting off for Erebor, Thorin decides to leave Kili behind because he is injured and would slow them down. There, the group divides because a few stay with Kili and you get sub-plot #5 – four Dwarves left behind in Laketown, and… Well, you see what I mean? There are at least another three sub-plots that happen in this film. That’s far, far too many.

This abundance of sub-plots results in poor Bilbo getting shoved aside. His role in Thranduil’s palace should have, could have been far more substantial than it was. It was almost like he disappeared from the story completely at one point. In Laketown too he barely did or said anything; it was all about Bard and his family and the Master and Thorin. It was only in Erebor, when he was made to go into the Dwarven halls to seek the Arkenstone, that Bilbo actually seemed to truly matter to the story. You almost forget to care about Bilbo amidst all the other things happening around him. He’s reduced to a character that does very little when it should be all about him. With The Lord of the Rings films, at least everyone was more or less focussed on Frodo’s getting the Ring to Mount Doom – everything that occurred was a result of that quest or in aid of it. With Desolation, I feel like the main point has been lost completely.

Many little things bugged me and distracted me throughout the movie, such as the addition of Alfrid (did we really need another Wormtongue-type character?), the un-Elf-like design of Thranduil’s bodyguards’ helmets, some of the outlandish stuff that happens (giant molten gold statue of the Dwarven king, anyone?), how Legolas’s face looks somewhat plastic and fake, and the fact that some random Elf in Mirkwood is named Elros (why not just call him Galion?).1 One thing that really bothered me was the Tauriel-Kili attraction. It’s one of those things that is simply contradictory to the Middle-earth that Tolkien created.2 Simply put, it felt a little awkward and forced. Legolas’s affection for her was one thing, but this was worse. The two lines of flirtatious exchange between them before she locked him up in the dungeons was definitely something un-Tolkien-like. That sort of innuendo is so modern (and un-charming) that it kind of jerks you out of the mystique and charm of Middle-earth for a moment. It’s a cheap method of getting laughs.

Tauriel’s healing abilities were kind of ridiculous too. Okay, so we don’t see exactly how far Kili has been healed (and won’t see the real effect of it until part 3), but it is implied that the wound he suffered has been sufficiently healed. Sorry, but how? Is Tauriel now also a great healer on top of her many other Mary-Sue tendencies? Frodo was stabbed with a Morgul blade, and both Aragorn (“The hands of a king are the hands of a healer”) and Elrond (who is renowed for his healing abilities) could not heal him completely – he carried its aftereffects around until he departed for Valinor. If, in the next movie, Kili seems to be completely revived and totally himself again thanks to Tauriel’s ministrations, it will just be too stupid.

I don’t know if it’s just my imagination, but I thought that Smaug’s voice started out being more dragon-ish, but gradually sounded more and more like Benedict Cumberbatch, who did the voice. It was as if… They’d decided to slowly lessen the intimidating dragon-like effects as the movie progressed. I really don’t quite know what to make of it. I would have to watch it again to see if I imagined it all, but I hardly feel inclined to sit through all 161 minutes of the movie again just to find that out.

Smaug is somewhat inconsistent in his actions. First, he detects Bilbo easily by his scent. He even manages to force Bilbo to take off the Ring and reveal himself (perhaps dragons have a fell power that can influence minds too?). But when Bilbo goes on the run in Erebor with the Dwarves, Smaug seems to promptly lose his sense of smell and at one point flies over the group without appearing to notice them at all. What? How??

Still on the Smaug note, I wish that Bilbo hadn’t taken off the Ring there. The dialogue isn’t half as fun when Smaug can see him. It was amusing in the book because Smaug couldn’t see him and was trying – and failing – to locate the cheeky person who was flattering him yet at the same time annoying him by being invisible.

Desolation isn’t totally bad, despite my griping. The barrel sequence was fun, fun, fun – much enhanced by how it doubled as both an escape sequence and a chase sequence. Thorin & co. are being tossed about in the river and chased by Orcs who are in turn pursued by the Elves. There was some very creative cooperative tricks by the Dwarves, and some very fancy footwork and fighting moves by Legolas.

It was a great pleasure to see Legolas in action again (I was so thankful that there was no dramatic confession-of-love scene from him; his feelings were all implied through brooding looks and glances at Tauriel, especially when Kili was around). It was an even greater pleasure to hear Sindarin being spoken on screen though I understood it not. (Legolas spoke mostly in Sindarin, which I liked, but which also indicated that he mostly had nothing very important to say because what Tolkien gave us of Elvish vocabulary is limited and that it would be impossible to structure very complex sentences in Elvish.)

Bard looks too much like Will Turner of Pirates of the Caribbean but otherwise I think that the expansion of his role actually does make sense – his children, and his part as the descendent of the disgraced figure of Girion, Lord of Dale who failed to kill Smaug. Bard is fairly essential to the ending of The Hobbit, and in the book we find out extremely little about him, so it stands to reason that the character needs to be fleshed out for the movie. This they did well.

Smaug. Smaug was excellently depicted. (I still don’t understand why they needed the motion capture work for the face; I’m fairly sure it ended up being mostly animated by animators anyhow.) I know I said he’s inconsistent in his actions, but one cannot deny that Smaug came off as a very impressive evil dragon in the movie.

The End of All Things. …No, just the end of this review.

When all’s said and done, The Desolation of Smaug isn’t a horrible movie. I can see why many people like it. Peter Jackson has made it into an action-packed fantasy adventure story. I haven’t seen his non-LOTR films, but already I can identify elements that he likes – lots of action, the battles and fantastical (and preferably creepy) creatures, for example. And that’s both good and not so good. It’s good because it makes the film more accessible to people, and it brings in a crowd that would simply not be interested in a simpler, lighter, less gritty story. It’s not so good because it feels like it’s turned into a Peter Jackson story, not a Tolkien one. (I’m not saying that the third film will totally deviate from Tolkien’s story ending – I highly doubt they’ll do that. But based on what I’ve seen in Desolation, the third part is likely to render the remaining chapters of the book nearly unrecognisable except for the absolute basics of the original storyline.)

If you go into the movie with little or no knowledge of the books, and no expectation or desire that it will adhere to Tolkien’s concepts about Middle-earth, then the movie is more enjoyable. Alas for me, I had neither. haha So it gets a three-star rating from me. ★★★

1 Elros is the name of Elrond’s twin brother, who chose the life of Men instead of Elves and thereby founded the line that includes Isildur and Aragorn. I’ve come to understand that Elves do not “recycle” names, least of all famous names. Elros would not be a name lightly used. Why not name the random Elf “Galion”? Galion is the name of the Elven butler of Thranduil’s palace in The Hobbit. Yes, the Elros character is not the butler, but if you were not ever going to mention the butler by name, why shouldn’t you then just shift the name to someone else if you needed an Elf name?

2 The Dwarves are a secretive race, and not generally fond of Elves. (Dwarven women are also, according to Middle-earth lore, rare and rarely seen.) The Elves, while not as secretive, are not overly fond of Dwarves either. It was only the Elves of Eregion that were ever truly friendly with the Dwarves (of Khazad-dum), and that was because the Elves there were particularly good with smithwork, like the Dwarves. Dwarves and Elves are so very different in culture and thinking that a romance would be awfully bizarre. In addition to that, one could argue that the Dwarves are a different species from Elves and Men altogether. Elves and Men were created by Eru Iluvatar, whereas Dwarves were created by Aulë (though given life by Iluvatar). (For a simpler comparison, it’s like saying God created the angels, and then Elves and Men, and one of the angels created Dwarves.) This is not Star Trek, where inter-species romance happens often. Therefore, it would be reasonable to say that Tauriel sides with the Dwarves on the basis of pure justice and kindness. But there is very little logic behind Tauriel falling for a Dwarf – even a tall-ish one.

3 Just for fun, I tried to name the sections of this piece according to chapter titles in The Hobbit. Tricky, though. I had to concede defeat and the first and last section names are adapted from track titles in the LOTR soundtrack albums. heh

2 thoughts to “The Hobbit: The Desolation of Smaug”