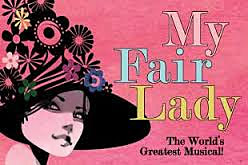 The plot is simple: Professor Henry Higgins takes up Colonel Pickering’s challenge to turn Cockney flower girl Eliza Doolittle into a genteel lady by teaching her to speak proper English.

“The World’s Greatest Musical” is a bit of a stretch, but then just about every show touts itself as the best ever so I guess one can’t be surprised by that line. It may, however, be the greatest musical about the English language. (Because let’s face it – there just aren’t that many musicals that revolve around the premise of speaking proper English. haha)

I’ve always liked the movie starring Audrey Hepburn and Rex Harrison, so I was pretty keen on seeing this on stage. However, it has been a while since I watched the movie so I quite forgot how long it was and the length of the play took me by surprise. It was a tad too long, and ditching the character of Eliza’s father would have helped a lot – even in the movie, his character is quite superfluous. There was no Embassy Ball scene, which is rather disappointing, but a look at the synopsis of the original George Bernard Shaw play, Pygmalion, shows that the Embassy Ball was skipped over as well so perhaps they were just following that instead of going by the Lerner and Loewe version for that part. (Lerner and Loewe wrote My Fair Lady based on Shaw’s Pygmalion.)

The performances were good, as far as I could tell. Quite liked the set design and the costumes. The Ascot costumes were the most impressive – as they were in the movie. I find the over-the-top hats hilarious. Speaking of Ascot, am I the only one who thinks the Ascot scene is the best in the whole thing? I think it’s a fun lampooning of the stiff British upper lip; it’s so amusing to have them talk (or sing) about “frenzied moments” and being “keyed up” whilst standing like statues with haughty expressions on their faces. And some of the funniest dialogue comes out in that scene, what with Eliza’s happily quoting “The rain in Spain falls mainly in the plain” when the subject of weather comes up, and then confusing the fine ladies with her talk about her aunt’s supposed murder and that same aunt’s fondness for gin.

My biggest issue with the story – both on screen and on stage – is and always has been the ending. I could never understand why she would go back to Higgins. I guess it’s implied that there’s a romance there, but I never felt one jot of romance between them. “I Could Have Danced All Night” is a lovely song, but it just makes me think, “Really, Eliza? Really? You like Higgins that much?” Apparently Shaw’s Pygmalion ended with Eliza not going back to him and planning to marry Freddy Eynsford-Hill instead. Freddy probably isn’t the most sensible choice for a husband, but it would have seemed more rational (given the timeline of that story) than Eliza’s deciding to go back to Higgins.

The ending aside, I enjoyed the show. I like the songs, I approved of the production design in general, and the cast performed well. Yes, I was disappointed by the lack of an Embassy Ball scene, and the whole thing was too long, but I still liked it.