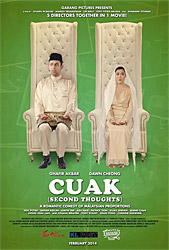 Cuak (“Second Thoughts”) follows Adam and Brenda on their wedding day and traces their relationship through flashbacks and intercutting storylines. The film is seen mainly from Adam’s point of view and we get a look at his interactions with the various people in his life – Brenda, his best friends, his future in-laws, his ex-girlfriend, and his troubled half-brother. The story doesn’t move in a linear fashion though, so adjusting to the random chronological jumps can be a bit tricky for anyone unused to seeing that sort of movie.

Cuak‘s main “selling point” (sorry, I can’t think of any other word – and I’m getting too used to saying “unique selling point” now after teaching two terms of advertising) is that the five segments are directed by five people – Khairil M. Bahar, Lim Benji, Manesh Nesaratnam, Shamaine Othman, and Tony Pietra. The saying “too many cooks spoil the broth” comes to mind, but it would be going too far to say that Cuak was bad. Considering the movie had five different directors, it turned out better than one would expect it to. There was quite a bit of talk about various perceptions of marriage (courtesy of Adam’s four friends) and the touchy subject of religion and conversion. The latter was handled fairly well, although there were moments where I felt the dialogue veered on being preachy or rather too obvious.

This will probably be easier if I go through each segment and treat it as its own little movie.

Adam (Ghafir Akbar) shouldn’t listen to his friends so much. Except the married one. The others are… Not the best to look to for advice, if you ask me. There’s the one who’s commitment-phobic (Ash Nair), there’s the one who just doesn’t believe in the institution of marriage (Gavin Yap), and there’s the one who really really wants to see strippers at the bachelor party (Iedil Putra). Hm. Anyway, this segment was okay. I thought Reza (Abdul Qahar Aqilah) didn’t quite suit his role. I mean, he was all right as the guy who has settled down to married life, but in the parts where the others were reminiscing about his “wild” days, he just didn’t look convincing. He lacked the swagger required for a character that the other four regard with some awe for being so “badass.” The other three friends were better cast and I rather enjoyed their banter sometimes. (Maybe Abdul Qahar should have switched roles with Ash Nair; Ash Nair looks like he could have projected the required “wild child” feel.) But that fight scene was not very well done; it almost looked like a joke. It felt like they were using the fast cuts and handheld camera to create action where there was none. Malaysian cinema really needs to work on their fight choreography.

Turns out that Brenda (Dawn Cheong) was once the housemate of Adam’s ex-girlfriend, Nina (Marina Tan). This segment was done found-footage style, with Adam taking up a camera to record a day out with his then-girlfriend. His day rapidly goes to pieces as his relationship ends that same morning due to differing ambitions and directions in life. I can’t say I liked this segment. Adam ended up looking like a rather pathetic jerk at the end of it, which made me wonder what Brenda ever saw in him (and this is never explained). The segment seemed to be neither here nor there – if you removed it from the movie, there would hardly have been a difference. (I’m beginning to find that that’s a pretty good way of judging the necessity of subplots and such: if you took it away, would the story change drastically? No? Then maybe it shouldn’t have been there.) I talked this over with Lianne and Sam and we pretty much all agreed that this particular story seemed pointless and didn’t actually go into interesting stuff like Nina’s reaction to Brenda’s getting together with Adam later on, or what Brenda saw in Adam (considering how he came off as such an aimless person here).

This bit involves Adam going to ask Brenda’s parents for permission to marry her. They chuck him in a creepy room and subject him to a bunch of “tests” that were just silly. An aunt waltzes in and tries to seduce him, then her mother tries to grill him on his finances, and lastly her father (Patrick Teoh) comes in with a fortune teller (played hilariously by Kuah Jenhan) to put Adam through another set of questions. While Kuah Jenhan’s fortune teller character was funny, the segment as a whole was a bit much. Almost too kooky. Did they have to make the in-laws look so ridiculous? The slapstick feel seemed out of place with the rest of the movie.

Adam’s detective half-brother, Mikail (Tony Eusoff), has two problems – he’s trying to track down an elusive killer, and he doesn’t think Adam should get married. Mikail doesn’t trust women, and as Brenda reminds him of his ex-wife, he takes an instant dislike to her. This storyline was shot in a very noir-esque manner, complete with the detective’s voiceovers and a brooding atmosphere. I was very surprised to hear Tony Eusoff speak Mandarin too. But I prefer him speaking in English.

His accent is really good – quite American – and it added to the noir feel of this flashback story. “Issues” was melodramatic, especially at the end of it, but maybe that balanced out the over-the-top weirdness of “Consent”? (It also begs the question of why Adam was still having second thoughts about marrying Brenda if he had gone through what amounted to a near-death experience with Brenda. This didn’t quite add up…)

Here we see Adam and Brenda getting into a rather heated quarrel over religion and their relationship. Brenda thinks Adam takes his own religion (and basically everything else) too lightly, and Adam gets defensive. The quarrel escalates and Brenda storms out… And to be honest, I don’t remember the ending of this segment. There was a lot of arguing, and I remember thinking that Adam seems kind of useless. That’s about it. This was the one where most of the discussion regarding religion came in, so maybe that’s why I don’t remember much else about it.

My biggest peeve was the handheld camera style of the entire movie. This is really a personal thing, of course. I don’t take well to that much camera motion – it gives me a headache, and I was curled up in my seat with my head in my hands a few times because the camera shake started to get overwhelming. There was also a LOT of close-up shots, which only emphasized the shaky cam effect (“The Footage” was the biggest culprit in this).

Cuak was a good effort, and I wish I could have liked it more. But it could have been better. I give it: ★★½

And someone really needs to do a noir-style English-language detective movie starring Tony Eusoff. (Preferably one where his character is less psychologically troubled.) I would totally watch that.