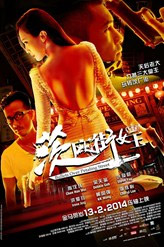 Angel (Debbie Goh) is a movie star who becomes the leader of one of the triads in Petaling Street when her triad leader boyfriend fakes his own death. She becomes embroiled in a power struggle with the other triad leaders, particularly Sa Pao (William San), who also happens to be the brother of Angel’s old flame, Da Xiang (Chen Han Wei). The other triad bosses team up under Sa Pao and he challenges Angel to an election to determine who will be the ultimate leader of Petaling Street.

I liked the basic fish-out-of-water premise in having a movie star catapulted into a prominent position in the criminal underworld, but they didn’t make good use of it. The first third of the movie, showing Angel naively thinking that merely acting the part of a triad leader would be sufficient, was pretty funny. But when the movie got serious or sentimental, it faltered. Once Angel realised that she had to be a leader, not just play pretend, some of the fun disappeared. Her scenes with Da Xiang, so obviously meant to be sentimental, felt obvious and a little bit forced.

The “twist” with Sa Pao turning out to be Da Xiang’s jealous brother who feels underappreciated by their mother (Irene Ang of Phua Chu Kang fame!) wasn’t much of a twist. Sa Pao was a very entertaining character (maybe one of the most entertaining) due to the over-the-top performance by William San, but it may have been better if they hadn’t tried so hard to make him sympathetic with the insecure son/sibling bit. (The amount of eyeliner Sa Pao had on seemed to increase with every scene. Not sure if it was just my imagination but I really felt like he had on way more eyeliner at the end of the movie than he did at the start. hahaha)

There were some very obvious jibes at our election woes in the triad election – dispensation of gifts before an election, random people trying to get in to cast a vote, and a sudden blackout in the middle of the vote counting. I’m actually really amazed the censorship board passed those scenes. I would’ve expected those to be the first scenes to be thrown out.

A subplot with two snipers (played by Star RFM 988 DJs KK Wong and Cheryl Lee) hired to do away with Angel was quite useless. This would be another case of “cut all their scenes and nothing would be significantly affected.” (I think this may be a flaw in many local movies – they like to pile on the sidekicks and the “humour” so much that they lose sight of the big picture.)

Not all the jokes fell flat; I liked Mrs Xie’s quip about how people say she looks exactly like Rosie of PCK (hehehehe). Sa Pao’s flamboyance was hilarious, but I felt that William San managed to infuse the role with a certain menace as well, which helped prevent Sa Pao from becoming a total joke. There was the rather random (and again somewhat useless) jokey trio of bodyguards known as “GPS” – Gemuk Pun Seksi (“Fat is Sexy Too.”). Although they served no real purpose as well except as nominal bodyguards for Angel and Da Xiang and Mrs Xie for a while, I have to admit that the “Gemuk Pun Seksi” part made me laugh aloud because it was so unexpected. I will never see the acronym GPS the same way again…

This movie could have been so much better. It was amusing, but far from stellar, suffering from a weak storyline and maybe too many attempts to be witty.