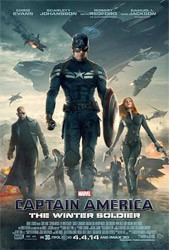 Steve Rogers is busy these days with his work for S.H.I.E.L.D. Natasha Romanoff often works alongside him – and often on a different (and less straightforward) agenda, which is something that Steve does not appreciate. But then there are many things that Steve finds difficult to accept, including S.H.I.E.L.D.’s priorities. In Captain America: The Winter Soldier, Steve’s world gets shaken up again when an insidious old enemy raises its head and Steve (and Natasha) become wanted figures instead of heroes.

With this film we get a Steve Rogers who seems a little better adjusted to modern life, but who still feels quite alone in the world. He goes to a Captain America exhibit in the Smithsonian and gazes sadly at images and displays of himself with his old friends – the most poignant of which are probably the video clips of Steve with his great friend, “Bucky” Barnes, and a taped interview with Peggy Carter in which we learn that she eventually married a man whose life Steve saved during the war. He goes to see Peggy, who is now very old and infirm and suffering from what seems to be Alzheimer’s, and that produced the most powerful scene (to me) in the entire film and maybe in all the Marvel movies so far. (I admit it: it made me cry, and still makes me tear up just thinking about it.) Chris Evans did a good job overall, but he was simply excellent in that scene with Peggy. (Kudos to the scriptwriters too.)

Steve is not friendless, but it is clear that he is lacking a good partner, a friend he can trust. Winter Soldier gives him a replacement for good ol’ Bucky in the form of Sam Wilson a.k.a. “Falcon” (Anthony Mackie). Sam is an ex-paratrooper who works with army veterans with post-traumatic stress disorder. He bonds with Steve on several levels – they both have military backgrounds, and they have both lost friends in combat. They have an easy rapport which comes across very well in the movie. There were not many “bonding” scenes, but what was there was well-chosen and made it believable that Steve would have gone to Sam for help when he needed it.

There are things I dislike about this movie, and most of it is: “there was too much handheld camera and it made me dizzy during fast action sequences.” But the directors and screenwriters and editors must be credited for managing to weave scenes of Steve Rogers’ off-duty life in with the overall story, without the scenes feeling like inserts or distractions. (The visit to Peggy’s could have seemed out of place but it was necessary, perhaps, to have that as “closure” for that chapter of Steve’s life – and leaves the character’s romantic options open once more. On that note, I did not find Sharon Carter/Agent 13 – his future love interest – very interesting or appealing. Perhaps I got too attached to the idea of Steve and Peggy, but alas, they are never to be…) I really appreciated all the “off-duty” sequences because they were a welcome respite from the aforementioned handheld camera scenes and because I enjoyed seeing Steve as just Steve, not as Captain America.

His new suit was very modern, and less costume-y than his suit in Avengers. But it made him look like all the other S.H.I.E.L.D. agents, except he was in blue with a silver star and stripes across his chest where the others wore mostly black. This, I surmise, was on purpose, as it helped make Steve’s role transformation much more striking. Perhaps the lack of the red and white stripes in Cap’s uniform also hinted at S.H.I.E.L.D.’s secret agenda – it was no longer a unit that was working for the people (of America), but rather an organisation aimed at world domination (villains always have such grandiose ambitions; none of them know how to start small). He goes from (fairly) obedient subordinate in S.H.I.E.L.D. to rebel fugitive and then the hero once more – donning, at last, his old uniform which he grabs from the Smithsonian exhibit – a smart application of the Chekov’s gun principle. I’ve always been a fan of that particular outfit; I regard that flight suit-inspired look as possibly the best realistic adaptation of a comic book superhero’s costume that I’ve ever seen, and so I was really happy to see him back in it once more. (I miss his 1940s hairstyle though. I thought that looked good on him. Sigh.)

Scarlett Johanssen and Samuel L. Jackson have significantly more scenes here than in previous Marvel movies. Nick Fury (Jackson) gets a good slice of dramatic action when he’s chased and shot at by unknown assassins. Natasha/Black Widow (Johanssen) gets almost as much screentime as Steve, and has a bigger role to play here than she did in Avengers.

Strangely, for a movie titled “The Winter Soldier,” there is not as much emphasis given to this mysterious Winter Soldier as one might expect. (I say “mysterious” but really, anyone who’s done any reading of the background of the characters – as I did before watching Avengers – will know that he’s not really that mysterious.) Oh, he’s in the movie, and he proves to be an opponent to be reckoned with. He also has quite a showdown with Steve at the end (during which Steve demonstrates his goodness and the power of friendship by refusing to fight him). But it felt like the Winter Soldier was a minor character in this bigger game of Steve versus the establishment.

I did enjoy the movie overall, even if I did hate the handheld camera that was liberally applied throughout the film. I would rate it: ★★★½

Additional note: I think it would be completely believeable if Steve Rogers developed a phobia of helicarriers and other large flying vehicles, especially if they fly over water. Think about it. He “died” trying to direct one away from a city (and crashed in the ocean and was frozen for 70 years), and then here he very nearly dies in one again and falls out of it into water (and would have drowned but for the fact that the Winter Soldier had a change of heart and pulled him out).