Once upon a time, there lived a bunny called Bunny. Bunny often helped out its neighbour, Hare, by picking apples from Hare’s apple tree (Hare had several fruit trees in its garden) and putting them into neat rows in a basket. This worked out quite well for Bunny as Hare would give it an apple for every basket, and Bunny liked eating apples very much.

One day, Hare asked Bunny if it could help pick some of the pears off Hare’s pear tree. Bunny agreed… and then found that Hare expected it to help pick pears every other day during the pear season. This was not really to Bunny’s liking, but Bunny figured it would do Hare a good deed and help it out this time.

Soon Bunny found itself picking cherries as well as apples and pears. And acorns. And weeding flower beds. Hare was paying it two apples for every basket now of fruit now (and nothing for weeding flower beds), but as it took a much longer time to fill a basket with cherries or acorns than with apples or pears, Bunny barely getting more than two baskets done in a day.

Bunny was up in the apple tree (picking apples, of course) when Hare bounded up to the foot of the tree.

“Do you think you have time to help me feed the goldfish in my pond today? I would so appreciate it! I’ve got to make some carrot cake, you see.” 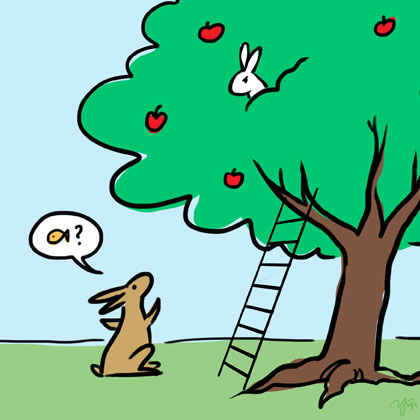 Bunny thought about it for a moment.

And promptly emptied the basket of apples on Hare’s head.

Bunny never helped pick any fruit for Hare again after that.