Changi Airport was so much more interesting than Heathrow. (It probably helped that Fran came to keep me company a while. Pity Joyce couldn’t make it though…) Or maybe it was just that I got stuck in boring Heathrow’s boring Terminal 1 with absolutely nothing to do… Still, Changi had this cute little area where you could do some woodblock printing thing.\ – just take a sheet of paper, pick a pattern you want and a huge wax crayon then rub it over. Random little amusement 8D 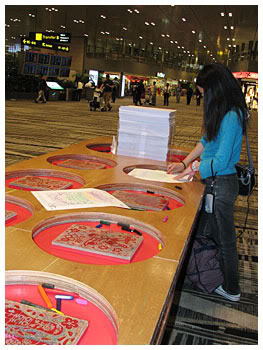 Didn’t sleep that well on the flight from Singapore to London because I just couldn’t get a good position for my neck and head. Kept waking up. Eventually resorted to playing games a lot. Like Tetris and Astropop.

I also watched 60歳のラブレター (Love Letters at 60), parts of Death Note 2, parts of The Proposal and parts of Parent Trap. (I say “parts of” because I skipped all the boring bits

Heathrow was SO BORING. I nearly fell asleep. The flight to Edinburgh was just as uneventful. I got a window seat, but all I could see was this: 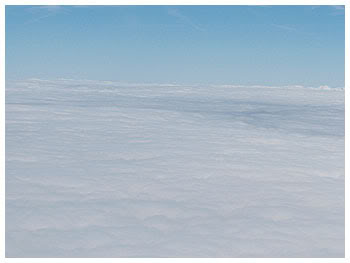 Only it’s clouds, not ice. (Although I suppose technically it’s all water, so…….)

So I decided sleeping was better. And was out like a light for nearly the entire one-hour flight.

I had arrangements with the Edinburgh Direct service for transport to my accomodation so that wasn’t a worry when I landed in Edinburgh. Met a few other students (whom I’m not at all likely to see again because all different courses) who were taking the same transport, including a girl from Italy, a guy from Wisconsin who was the chattiest person in the van, and a guy from Poland. Once when I was talking to the latter, Mum & Dad phoned and so I talked to them a while. When I was done, he said that it seemed strange to him that I spoke English to my parents and not my “native language.” LOL.

Anyway… I was the last to be dropped off – the others were mostly near the city centre. Don’t ask how or why I ended up being far away in the suburb (30-45mins walk from the George Square campus, where my classes will be). I make weird choices sometimes. =_=

So I got my keys, went to my hostel, hauled my heavy bag up several flights of stairs to my third-floor apartment, found my room, went upstairs to report to the Resident Assistant or whatever you call them, and went back down to my room to immediately fix up the internet. Behold, my room before I properly unpacked: 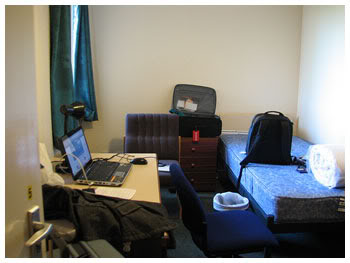 My other housemates were apparently out, so I could wander around the common areas in our flat quite easily (I just don’t understand the amount of doors…)

This is the dining area. 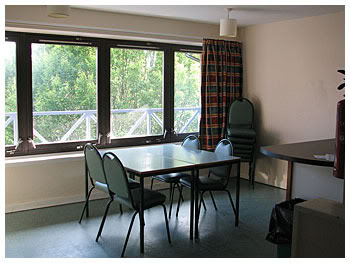 And this is the sitting room.

I just realised I don’t have any pictures of the kitchen, which is in between the dining and sitting. I thought I took a photo of it. Hm. Oh well. *shrugs*

This is the view from the sitting room: 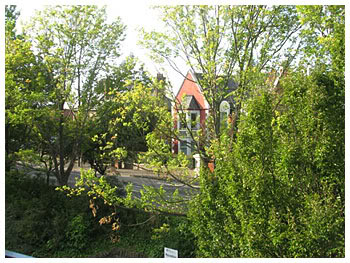 Somehow I’m fairly sure we have much nicer views than those people who stay in the city area. All there is to see there are brown brick houses, unless they happen to face Edinburgh Castle or Arthur’s Seat or something. And it’s not like the sidewalks are particularly pretty…

I can see Arthur’s Seat from my room though! 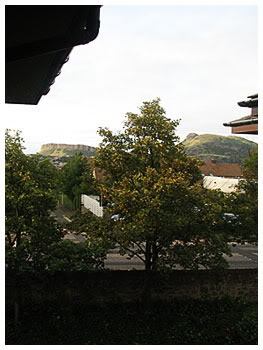 (And if I look down, I see the front entrance to our block…)

5 thoughts to “Arrived in Edinburgh”