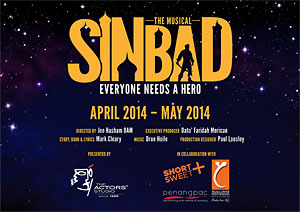 Oh dear. I fell asleep at multiple points throughout this show.

And I think that just about sums up my opinion on Sinbad the Musical.

Here’s the summary from the programme:

In our story Sinbad arrives in the city to find it under the spell of an evil vizier who has imprisoned the true king and enslaved his beautiful daughter Yasmin. It doesn’t take Sinbad long to join with the citizens to overthrow this menace. Along the way he meets the magical Fatima, the grizzled old General and a host of colourful characters.

Since we’ve established that I did not think highly of this musical, let’s look at the why and wherefore of it.

I think the biggest problem with Sinbad is the script. It’s a weak script, with entirely too much time given to characters that are not – or should not be – as essential to the story as, well, Sinbad. Sinbad is supposed to be the hero but he hardly does anything heroic (or anything interesting), and from one of the early scenes I got the impression that he had to be partly hypnotised into it which just undermined the heroism even more. The princess is there to just put up token resistance to the villain and otherwise be rescued. Fatima was there to… Do random magical things that are supposed to help the story but I just felt they were pointless. The General was slightly more interesting but he wasn’t given enough to do or say. The other “colourful characters” included an arrogant captain of the guards, a caliph that seemed little more than ornamentation, and a young orphan girl who irritated me to no end and also served no real purpose in the story. The vizier was maybe the most interesting character (reminded me of Lord Farquaad from Shrek) and I think that’s because he had the combination of clear motivation, clear action, amusing quirks, and sufficient “talk time” (I can’t say “screen time” for a stage play haha). The other characters, for the most part, did not have the same combination and suffered from the lack of one or the other.

Plot-wise, it left a lot to be desired. There were pointless happenings (e.g. the magic carpet thing) and scenes that happened too suddenly (e.g. Sinbad’s crew breaking out from prison), all of which left me with a “Huh? What?” sensation. Again, I feel it’s a script issue. Why give so much time to random characters when you could use that time to build Sinbad instead? The captain of the guards didn’t need a solo. Nor did the caliph. Ezra is a character only marginally more important than any random ensemble cast member because she’s like the princess’s handmaiden or something and gets maybe two lines in the entire show. But they gave Ezra a solo. Why??

The songs were unmemorable. Even with that weird stage musical version of The Hobbit, I could at least remember the type of music (they used some strange ’80s-ish music which was really bizarre) though not specific tunes. I remembered absolutely nothing from Sinbad after I left the hall. Not one note. It was disappointing. The first time I dozed off was during the duet between Sinbad and Yasmin, and after that I think I drifted in and out of consciousness intermittently. I was awake for some songs and half-asleep during others. (You could also say that I managed to not fall asleep until the duet between Sinbad and Yasmin, which was halfway through Act I.)

It’s such a pity because I think the cast does have talent. They can sing (as far as my ears can determine; Anna would have a better ear for the music), but the songs didn’t do their talents justice. Anrie Too was wasted in the Fatima role. True, it was the most active female character, but it was also pointless. Mikey Hart, who played Sinbad, evidently has a good voice but he too was wasted on the role. I’m sure he can act but the role gave him nothing to do. Gene Sha Rudyn was the vizier and he did well. Thumbs up there. In the main cast list in the programme, there’s a character named Ezra but if it wasn’t for the photograph of the actress in costume I’m sure I would have no clue who this character was – even though I saw the show. Patrick Teoh appears as the Genie in the mirror (via video recording) and he’s pretty funny; he should have been given more lines! haha

I’d expected more from this Malaysia/Australia production but it was such a let-down. Production design was not bad though.