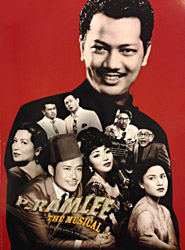 Short version: P. Ramlee the Musical is based on P. Ramlee’s life, and tells of his rise to fame and how that affected his relationship with each of his wives. I was quite impressed by it.

I think I’ll break this down by topic…

It was, at its most basic, about P. Ramlee and his three wives. All the action in the story comes from his interactions (or lack thereof) with his wives. There is no Big Bad Guy trying to destroy his career or anything like that. The Big Bad Guy might be said to be his ambition and his career, as it was his busy-ness that left him little time for his family and resulted in two divorces. It was a little long (each act ran about 1.5 hours, making it 3 hours in total!) and I put that down to the fact that they wanted to include so many of his well-known songs as well as several original ones written for this musical.

The titular role went to Tony Eusoff, and his wives, Junaidah, Norizan and Saloma were played by Lisa Surihani, Tiara Jacquelina and Nadia Aqilah. Tony Eusoff was his usual talented self, although hearing him try to speak like P. Ramlee was slightly odd. Nevertheless, he was fun to watch, especially in the scenes with Saloma. I’ve heard of Lisa Surihani, am familiar with Tiara Jacquelina (what Malaysian hasn’t at least heard her name?) but had not the foggiest idea who this Nadia Aqilah was. She has a very good voice, though, and the audience seemed appreciative of her rendition of Saloma’s songs. The rest of the cast was good too, with Iedil Putra (who, like Tony Eusoff, I’d also seen in Romantic Fools) as P. Ramlee’s good friend, and some famous names like Aznil Hj Nawawi, JJ (the deejay from Red FM), and Douglas Lim and Reuben Kang appearing in smaller, more comedic roles in the story.

The production design was good (that train! There was a collective gasp from the audience when the train appeared). I would say the production design is on par with Princess Wen Cheng, but I felt the lighting design was a less sophisticated. The opening backdrop, the train ride side, and the studio set were probably the best ones. I was only slightly distracted by the looping videos used for some of the backdrops – especially the ones featuring newspaper headlines in the film noir style. If the videos hadn’t been looping videos it would’ve been less distracting but I suppose it would be difficult to make backdrop videos that last several minutes without some looping involved.

I would probably have appreciated some of the songs more if I was more familiar with P. Ramlee’s work, but as it is, I’ve only watched Anakku Sazali and the only song of his I’m really familiar with is Getaran Jiwa. *shamefaced look* The original songs were all right. My favourites were “Penang 40’s” and “Penang to Singapore”, both lively ensemble pieces. The cast can sing (most of them have proper theatrical training) so it was a pleasure to listen to them, but a pity that sometimes the bass line of the music was a bit too loud and it drowned out the lyrics. The dances were nothing spectacular, but performed well. I must admit that I was really really puzzled by the last ensemble piece. I think it was something about the chaos in Singapore after Singapore left Malaya but… I didn’t quite get the point. I only got the idea based on the projections which featured newspaper headlines talking about it and silhouettes of people picketing. The dance appeared to have nothing whatsoever to do with it, and was also a bit strange. That was a rather big blip, especially since it came in the penultimate scene.

I think this is the first predominantly Malay-language musical I’ve seen (it had a smattering of English here and there) and I’m happy to say that it was a good one. I would rank it somewhere around the middle of my list of Musicals I’ve Seen. Maybe #14 or 15 (out of 27). Everything above it on my list is West End/Broadway-based, and it ranks significantly higher than Mamma Mia, Chitty Chitty Bang Bang and Fame! so that says something I think!