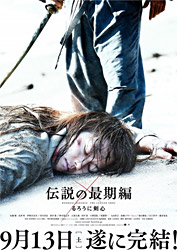 The movie that follows Rurouni Kenshin: Kyoto Inferno concludes this story arc with Kenshin attempting to learn the ultimate technique of the Hiten Mitsurugi Ryuu style whilst Shishio Makoto threatens the government and coerces them into naming Kenshin a wanted man again.

The Bad, or the Could-Have-Been-Better

I think the first movie was the best, but this one’s not too bad either. It was still enjoyable

One thought to “Rurouni Kenshin: The Legend Ends”