Judging from my blog stats, if I don’t have photos up, people don’t read my blog. Is my writing that bad?

Anyway, I’m taking Dr Budd’s advice to us to not panic and take time to relax, even though the bibliography exercise has a really short deadline. Also, I’m really tired of thinking, thinking, thinking and searching endlessly for scholarly books and articles that have to do with Asian American pop culture and Southeast Asian cinema.

I finally got some backlogged snapshots out of my phone and my camera.

During Fresher’s Week, I had a bunch of induction talks to attend, and the first one was a general induction for all the Master’s students in McEwan Hall, which is apparently the hall used for the graduation ceremony. Stupidly, I didn’t bring my camera with me and so had to resort to using my phone to take a few pictures. This was probably the best one: 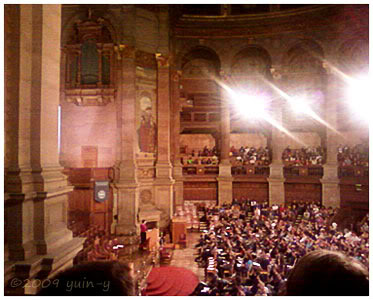 It’s semicircular in shape, with I think two levels of seats above the ground floor? It was built in the late 19th century, which accounts for the “whoa” sensation I got when I went in. (I haven’t exactly spent a lot of time in grand old buildings…) Here, have a link about it.

I’d gone for the talk with one of my Chinese flatmates and two of her friends, and they all insisted that the induction talk was held in New College, not McEwan Hall. We walked halfway there, then ran into two other Chinese students who then told us that it was at McEwan Hall. By the time we got there, we were late and had to sit at this rather inconvenient spot where we couldn’t see any of the slides being projected. Sigh.

This is the exterior of McEwan Hall – picture taken just a few days ago after class when I had my camera with me and some time before the bus arrived. 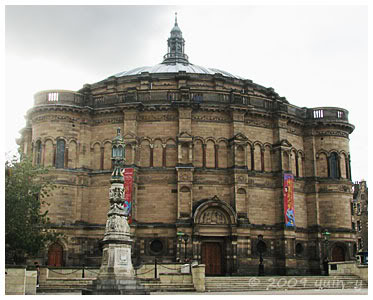 This is the student association building (photo taken on the same day as the McEwan Hall one above): 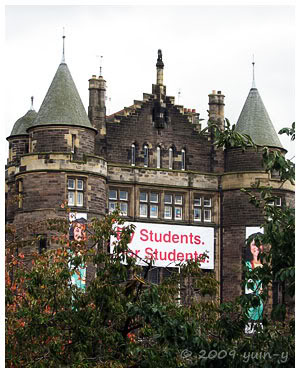 And during the first Film Theory class, I snuck a photo of my lecturers, Dr Beugnet and Dr Ravetto. If they ever stumble upon this, I hope they don’t hate me for it. 8D 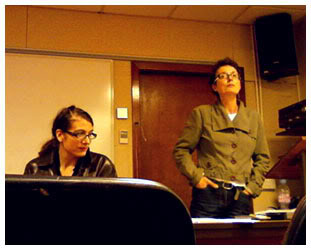 Our Research Methods lectures were held in the Reid Concert Hall. I took this pic with my phone before the second lecture. The class before us had evidently ended not long before and was evidently also a music class of some sort. Some of the students who were walking out as we went in were carrying various cases of musical instruments, and the grand piano was still out in the middle of the floor and such. 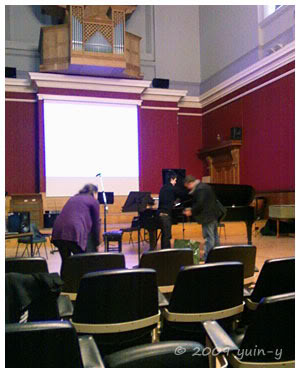 This is a better photo of the hall, taken with my camera instead of my phone, after our last lecture on Friday: 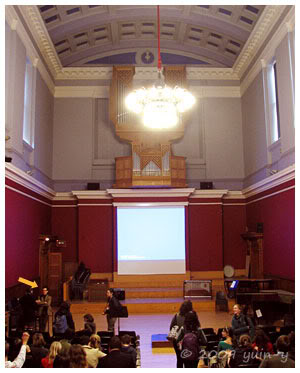 That pipe organ up there is important for some reason or other – built by a famous person, maybe? I don’t know, but it’s significant anyway. hahah!

Oh, and see that little yellow-orange arrow down on the left in the photo? That’s my Research Methods lecturer it’s pointing to. XD He’s so much fun! I was talking to two of my classmates after that last lecture and we all wished that he was teaching us something else as well as Research Methods. He has this engaging way of talking that makes you interested in what he’s talking about. I mean, he teaches Research Methods. It’s not exactly an enthralling subject on its own. And he has to be very general because it’s a class for the entire Languages, Literature and Cultures school (LLC), which includes not only English lit, but also Chinese studies, History of the Book, Medieval Studies and Film Studies, to name a few. And yet his lectures are fun (even if there was a bit of information overload, since we didn’t have much time). He can even make the Oxford English Dictionary sound interesting. It’s a dictionary! Who finds dictionaries interesting? We did (at least for a while) after the lecture ended.

He finished the lecture a little early so that he could address any questions about our bibliographical assignments, and after a while of being bombarded by queries about it, he said, “I get the feeling you don’t want this class to end.” Everyone laughed, but as one of my friends pointed out later: it’s true. We really didn’t want it to end because he’s so fun – in addition to being helpful and hardworking and all that.

The lectures are fun, but the assignment… not so fun. Well, it could be worse, but it’s still quite a bit of work! (It must be noted that it’s just amazing how Dr Budd managed to come up with over 100 different bibliographical exercises within 2 days – exercises geared towards each person’s research interests too.) I spent most of Thursday night trawling the university library’s online catalogues for related books and e-journals, then most of Friday I was in the library, looking for those books and making notes on them. On Friday night, I continued my quest for e-journals, as well as poking through the National Library’s catalogues for other books as well as books I couldn’t find in the uni library. And then Saturday… Saturday I spent a short while in the National Library (short because I hadn’t realised that it closed early on Saturdays – I kept thinking it was the same as the uni library). And after that I wandered around the Royal Mile area with my Egyptian housemate, Heba. But that’s an entry for another day…

I mentioned all the stuff about Research Methods to Heba, including how our lecturer could convince us that studying the history of the word “sensibility” could be interesting, and she said that that‘s a good teacher. So true. I’d like to be a teacher like that some day.

(How did this post – which I meant to be mostly about the McEwan and Reid halls – turn into one about Research Methods when it is the Research Methods assignment that I’m trying to take a break from? lol)