I decided that I wanted to do something really fun for my birthday for once (haven’t had a really really fun birthday in years, sadly – it’s always just “nice” or “okay”) so I took myself down to Singapore and rustled up my Singapore-based friends, who, fortunately, were nearly all available to entertain me that weekend except for Jo and Ian.

Arrived on Saturday and went to the Night Safari with Janice and Candice. It was quite fun! (Singapore’s animal-based attractions have yet to truly disappoint me. I really liked the Singapore Zoo, I thought the River Safari was interesting, and I thoroughly enjoyed the S.E.A. Aquarium on Sentosa.) Not good for photography, but still fun.

I only got two semi-decent pictures all night, and the first was this one of… I forgot what. Some sort of mountain goats? 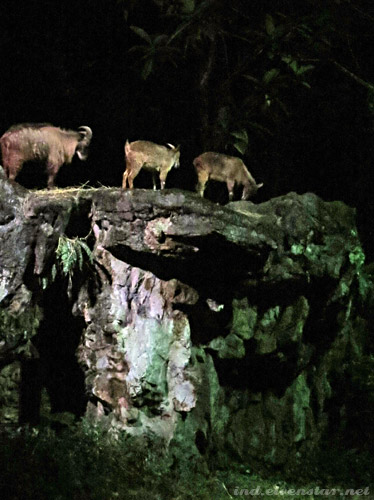 (This was the first picture I took – at the start of the tram ride.)

We did the tram ride first, then waited for the 9.30pm Creatures of the Night show (I thought the show was just okay), after which Candice and I took the tram halfway and hopped off to explore one of the walking trails before getting back on the tram again to complete the circuit and get back to the entrance.

On the walking trail I got this pic: 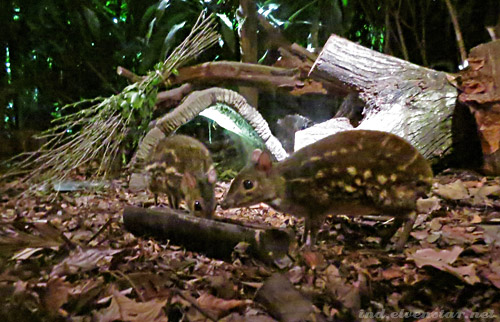 Mousedeer! They’re SO cute. I wanted to take them home…

When we got to the mousedeer section we didn’t see anything at first but I decided to take a look at the hollow log and found one sitting there. We were both so delighted (having just come from the tarsier section where we saw nothing but plants because the tarsier was obviously hiding somewhere out of sight), and became even more so when a second mousedeer trotted out after a few minutes of us peering at the one mousedeer and trying not to talk too loudly in case we frightened it away. (Candice remarked that I “really like animals.” Yes, I do. I’m not even sure why I have this fascination…)

The pictures look bright but believe me, it is dark. Everything’s just shades of blue and grey except for certain spots where the lights are a bit brighter (like where the lions are). It’s not for those who are afraid of the dark. I thought walking the trails in near-darkness was rather fun although I felt like my eyes were going to be as big as saucers by the end of it from peering into foliage to try and see where these animals were.

Candice and I were really glad we chose to do the tram ride twice because it was a different experience. The first time round we had a guide who had a pretentious accent which none of us appreciated, and at some parts we could barely understand her. We saw the tapirs – one of which was so close to the tram that if I had just stuck my hand out I would have been able to pet it. Talk about resisting temptation. hahah But we didn’t see the tiger. On the second round (or third, actually, because this was when we were heading back to the entrance after finishing the trail) we didn’t see any tapirs but we saw the tiger! The tiger was pacing to and fro though, and I recalled having read somewhere that when animals pace like that it can be a sign of stress.

It can’t have been fun to be the tiger because right next to the tiger’s section was the arena for the Creatures of the Night show and it could get pretty loud at times. Poor tiger…

Ooh, when we were doing the trail, we heard the lions roaring! They roared… and then stopped. And then roared again. They stopped roaring when the trams went by. It’s almost like they decided to be as boring as possible when those obnoxious humans pass.

I really want to go back and do the other two walking trails.

The next day – my actual birthday – Fran and Joyce kept me company. We went to NCC for Sunday service before heading to Orchard Road for lunch and then social painting at Arteastiq! You get 3 hours of painting time, a set of (cheap) brushes, a 50x50cm canvas and unlimited acrylic paint to use for about SGD48 I think. It’s so much fun. Well, to me it is. It’s probably not for people who just want to run around and be active. 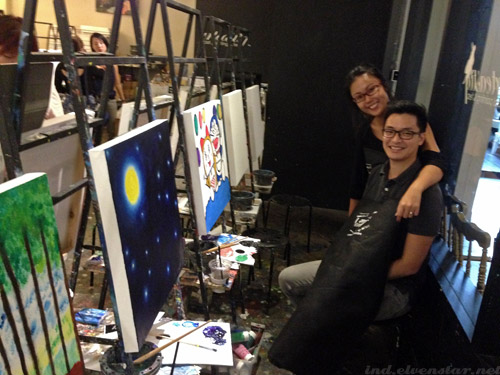 My two awesome companions for the day! 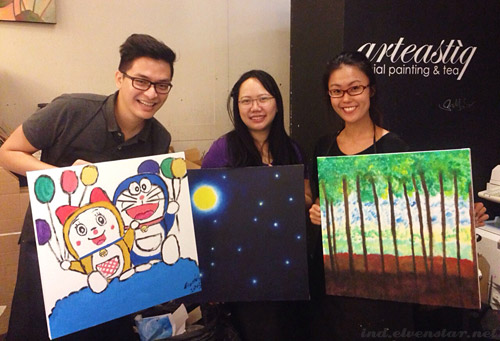 (I resorted to doing something simple because I just knew I wouldn’t be able to finish anything complex in a satisfactory manner in 3 hours. I’m actually surprised that the moon’s glow is so… intense.)

Went to have chirashi-don for dinner, and then some ice-cream at Clarke Quay before we parted ways.

All in all I had a thoroughly enjoyable birthday with four great friends and I am so thankful for it!