The main thing I did on Day 6 was… Go to Uji for a couple of hours. lol Uji is about 20-30 minutes from Kyoto en route to Nara. Length of time depends on whether you take the local or rapid trains (both covered by the JR Pass). I think I took the local train. Anyway, Uji is known for green tea, and for being featured in the famous Tale of Genji. Clearly they’re proud of that fact, as the signboard at the station names it The Town of the Tale of Genji.

Here’s a map of where I went in Uji: 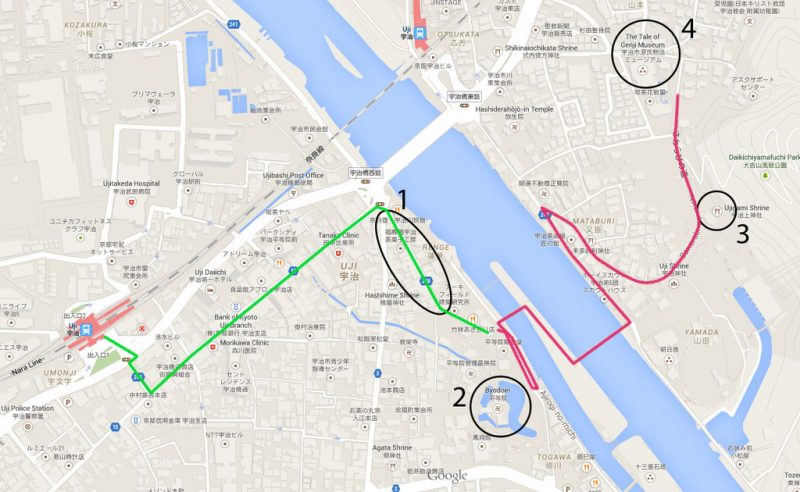 Green indicates my walking path up until Byodoin. Dark pink is my path after Byodoin. Girl carrying a basket of tea leaves. (This is right across from the Uji Station.) This was definitely one of the warmer days of my trip. But still chilly enough to have my winter coat on and not be all sweaty. 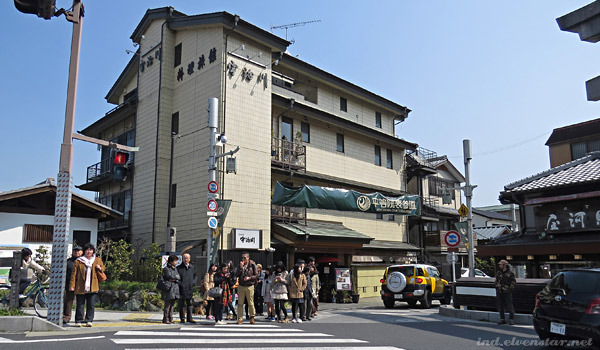 At the crossing before the Byodoin Omotesando. 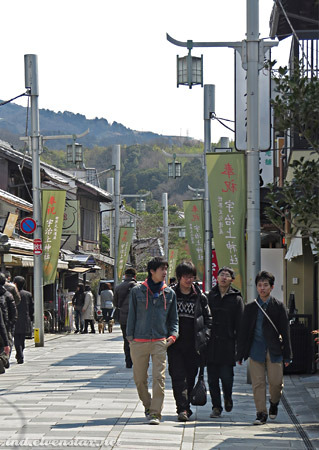 Strolling down Byodoin Omotesando, there were many tourists in sight. The whole road is full of shops selling green tea or green tea-related products. This one right outside Byodoin sells green tea ice-cream too. Paid the 600-yen entry fee (opted not to add on 300 yen for entry to the Phoenix Hall) and walked into the Byodoin compound.

Pano shot with the iPhone! (No, the place was not that empty. I was just lucky that no one walked in front of me at this point.)

Byodoin is supposed to be a prime example of Jodo (“Buddhist Pure Land”) architecture and is a world heritage site.

Some info from Japan Guide:

Together with its garden, the temple represents the Pure Land Paradise and was influential on later temple construction. Byodoin was initially built in 998 as a countryside retreat villa for the powerful politician Fujiwara no Michinaga, not as a temple.

Michinaga’s son turned Byodoin into a temple and ordered the construction of its most spectacular feature, the Phoenix Hall. Although the building was given another official name, almost immediately after its construction in 1053, it was nicknamed Hoodo (“Phoenix Hall”) because of its shape and the two phoenix statues on its roof. The hall is now featured on the back of the Japanese ten yen coin. Knowing that it’s on the 10-yen coin, I just had to do this. Let me tell you, it’s not easy to get a good picture when you are holding up a coin with one hand and your iPhone with the other, and your camera is hanging around your neck, and your bag is slung across one shoulder… 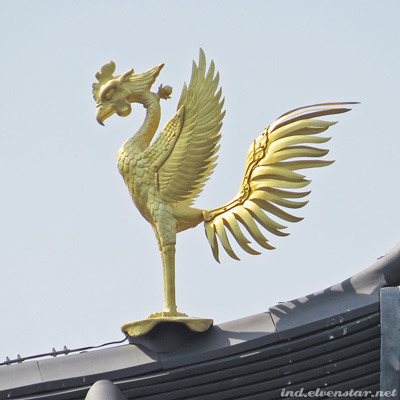 Here’s one of the phoenix statues that gives the Phoenix Hall its name. (Don’t you just love superzoom lenses? I do.)

After you walk round the temple, there’s a Treasure House behind it. It’s a small museum that houses Buddhist statues and other stuff that I wasn’t too interested in. The huge old bell was the only thing that really intrigued me. But I liked the general architecture and interior design of the Treasure House – very modern and minimalist.

I didn’t really have anything else in mind to see in Uji besides Byodoin. So I decided to cross the river and see if I could find the Tale of Genji Museum. They seemed to be doing some construction work on the little island on the Uji River, and there were these cute blue elephants! The river and the main bridge from the other bridge where I was. 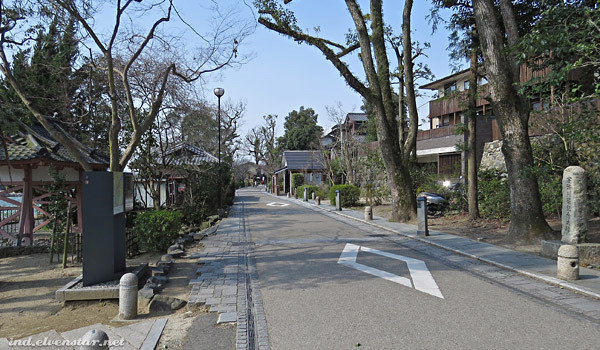 The quiet little road on the other side. It looked like it must be so peaceful to live there. 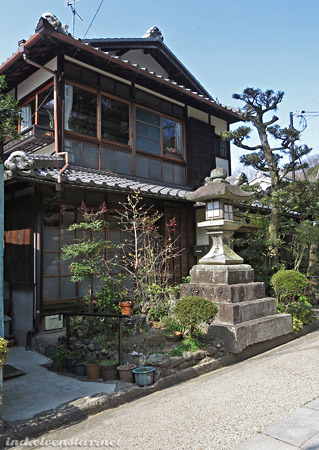 Random house on the same Sawarabi-no-Michi. I rather like the look of old houses. They probably wouldn’t be much fun to live in (they look narrow) but they’re nice to look at. 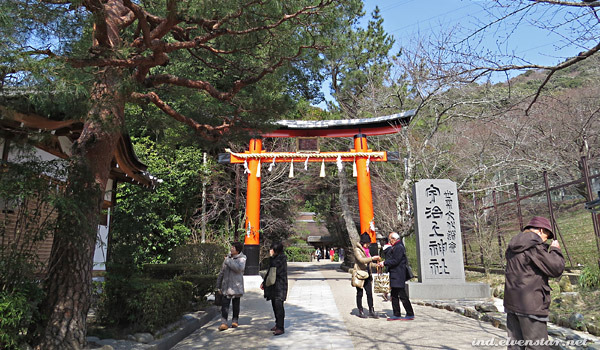 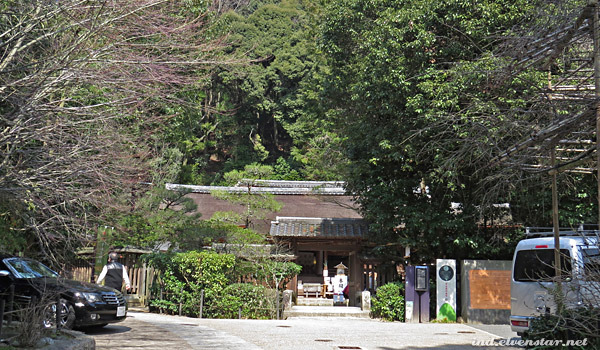 Walked past Uji Shrine and up a little way and arrived at the tiny Ujigami Shrine, which is also a world heritage site – the smallest one in Kyoto (so this site tells me). 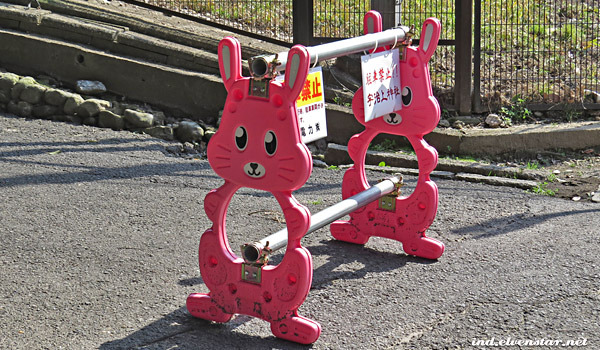 Ujigami’s haiden (front shrine – I learnt something new today!). Apparently the mounds of sand are called kiyome osuna (sacred sand) they are supposedly the place where gods and spirits descend. I was wondering what on earth they were for… 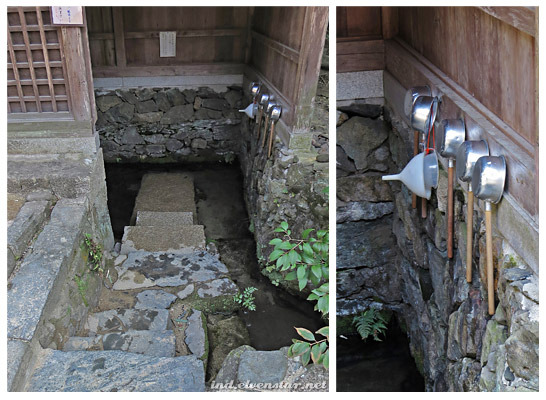 There was a little hut off to one side and upon inspection, I found that a stream or spring fed a little pool there and there were ladles hanging on the side. I guess this is for you to wash with before you pray? A smaller shrine a little way up beyond the honden (main shrine), which was behind the haiden. 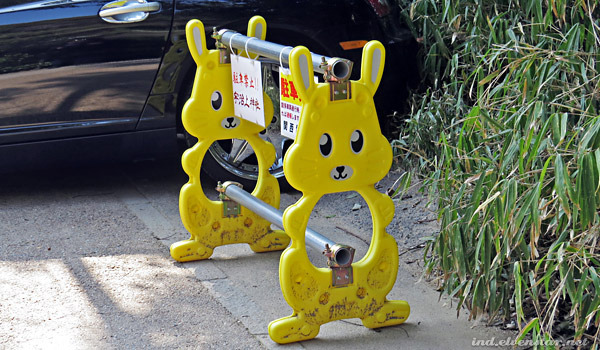 Yellow bunnies somewhere outside the shrine. (So many coloured animals in one day. hahah)

There was a small pond in front of the shrine, and you have to cross a small bridge to enter/exit the shrine. I saw a fat carp (chagoi, by the looks of it) swimming placidly in it. Even drain covers can be made pretty. The rest of the world needs to learn this.

The circular emblem in the middle is the Uji city logo. The Uji City site informs me that the logo is based on the 宇 character, that is the “U” part of “Uji.” That’s pretty cool graphic design (although somewhat vague – it’s a very abstract depiction of the kanji). The flowers are the city flowers – the Japanese globeflower, Kerria japonica. Denshi Jisho says it’s also called the Japanese yellow rose. The text at the corner reads: shi no hana    yamabuki. I understood the first part just fine (“city flower”) but it took a bit of extra searching to figure out what yamabuki meant, as it could apparently refer to several different flowers.(See, this is why I can’t understand it when students seem clueless as to how to locate info. If I can do it, why can’t they? And most of them grew up as real digital natives with smartphones from high school age and Internet almost from birth… I only got a smartphone at 26 and only had Internet since I was 10 or 11.) 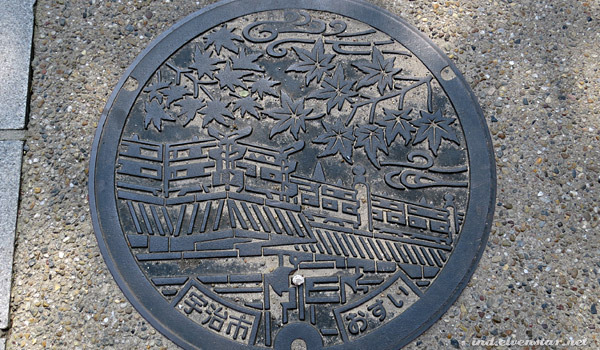 Uji City … *looks up words* Sewage? LOL. Well, the picture evidently has nothing to do with the words. But maple leaves and traditional architecture are certainly prettier to look at than sewage pipes.

I went all the way to the Tale of Genji Museum… and decided not to go in. LOL.

I’d been trying to read the Tale of Genji but it’s not written in an easy-to-read way. I get confused because the style of the time was to not name the characters so when nearly everyone is the lady of so-and-so or the wife of X or the admiral of whatever, it’s a difficult read… So I figured that the museum may not be that interesting to me. I just looked at the nice exterior and then retraced my steps. XD 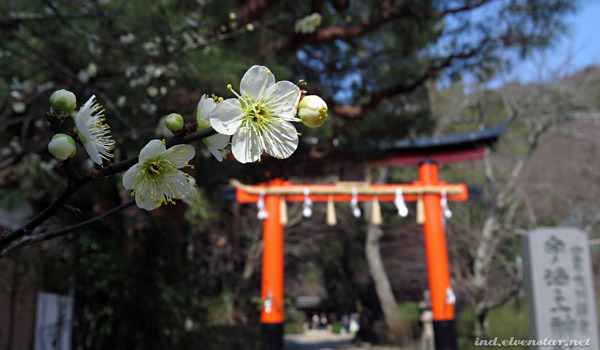 Back at Uji Shrine, I suddenly noticed some plum blossoms. (Plum blossoms have no notches in the petals, cherry blossoms do.) 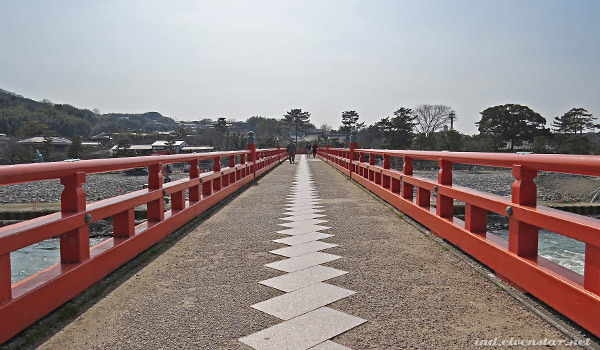 On the bridge again, walking back. As you can see, it was a sunny day. LOL look at the cute car and truck!

On the way back I had to stand in the train – for the whole half hour journey – because Kyoto is the last station on the line and so it was fairly full once it got to Uji. Well, once back, I stayed in my room a while, had dinner, then walked around Isetan (which was in the station). This Isetan has 11 floors (but isn’t really huge because it’s not a wide layout – longer rather than wider). I liked the layout because I didn’t have to circle round the floors to get to the escalators – they were all in a straight line so if you wanted to go up/down, you just keep walking straight. No need to go round to the other side to get to the next escalator in the same direction. Decided to poke around the station a bit more and discovered that these steps leading up to the rooftop had light displays that changed every few minutes. It was rather pretty. (Ah, but if only it hadn’t been so cold… The wind was blowing in so my fingers were all but frozen off again.) The stairs are right above Isetan, so if you go right up to the rooftop, you’re 11 floors up. Tried to take pictures up there but it was too dark and I was too cold. So after a few minutes I went back down.

(There are escalators out here too so you don’t have to walk up all those stairs if you don’t want to.)