I haven’t reviewed a movie in a while… So here goes! 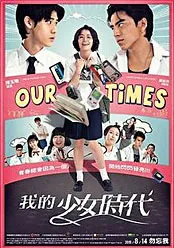 Watching Our Times (which seems to me an odd translation of what is apparently more like “My Girlhood”) is like watching a Japanese/Taiwanese high school TV drama compressed into a movie. It’s chock-full of clichés but for some reason, it just works and is almost ridiculously enjoyable.

The bulk of the story is set in the 1990s, in the protagonist’s schooldays. Lin Zhen Xin (Vivian Sung) is the frumpy girl with a crush on the school heartthrob, Ouyang (Dino Lee). She gets a chain letter that threatens her with a curse if she doesn’t distribute the letter in turn. One of those she chooses is Hsu Tai Yu (Darren Wang), the big bad boss of the school’s delinquents. This ends up backfiring on her and she becomes a sort of errand girl for the bully.

…And anyone who’s seen East Asian TV dramas will know where this is going.

Even so, it really was a fun watch. Part of it is the nostalgia – things like chain letters (I remember stupid chain e-mails more; don’t think I ever sent out any myself), “autograph” books, Hong Kong pop stars like Andy Lau (though I never went crazy over them, I certainly knew about them), and calling people on their house phones instead of mobile phones. For viewers around my age, it does bring back a few memories.

The other part of it is, I think, the expert delivery of all the TV drama clichés. In all honesty, the movie is basically a walking, talking stereotype of a high school rom com from start to finish, bookended by Lin Zhenxin’s current life in her thirties. (The only clichés it seemed to be missing were that no one was filthy rich, and no one died from an illness.) But… The performances were very appealing. In addition to pure acting skill, I think charisma and on-screen appeal are of utmost important when playing characters of very specific stereotypes. Yes, the dialogue was cheesy, but you still feel for the characters. Despite the cheesiness, the movie managed to hit all the right emotional beats. The romantic parts still managed to feel romantic, and the dramatic parts managed to feel dramatic. Such is the power of good performances and good editing. Considering this is the directorial debut for director Frankie Chen, it was a job very well done.

SPOILER warning: The cameos at the end were great! I very much enjoyed sharing in the audience reaction – gasps of amused recognition – to those bits.

Andy Lau appeared as himself, surprising us in two ways. First, because we thought when the guy turned around it would be Hsu Tai Yu, but it was Andy Lau and that was such fun. Lin Zhen Xin’s failed attempts to not come off as a fangirl totally failed too. lol And second, I don’t think we expected Andy Lau to show up in the movie at all although it was established early on in the movie that Lin Zhen Xin was an Andy Lau fan.

And then there was Jerry Yan, he of Meteor Garden fame, who appeared as the older version of Hsu Tai Yu. I found this very amusing because while watching the movie it occurred to me that Hsu Tai Yu reminds me of Doumyouji from Hana Yori Dango (but with more academic intelligence and much less money). So to have Jerry Yan, who played the Doumyouji character inn the mega-hit Taiwanese adaptation of Hana Yori Dango, play the older Hsu Tai Yu… well, that was a rather roundabout meta reference of sorts. hahahaha

One thought to “Our Times (我的少女時代)”