I went to Breakout at Nu Sentral today with Berlina, Daryl, Tim, Jo, Raj, Tania, and Grace’s cousin, Ping. I’d never tried one of these “escape” games before so it was interesting!

Breakout’s games require each player to choose one of eight “characters” to play: Lightbringer, Oracle, Timebender, Scholar, Lockmaster, Assassin, Healer, Gemini. Each character has a different skill. For example, “Lightbringer” gets a torchlight, “Oracle” gets 2 minutes before the game starts to memories photos of where the clues are in the room(s), “Assassin” gets to kill one (and only one) teammate in exchange for a direct answer from the gamemaster (this one means the one who is “killed” is basically out of the game for 8 minutes unless the team has a “Healer” who can heal said dead teammate, and “Gemini” can clone one teammate’s ability – meaning you can have a double of any single character except the Assassin and Lockmaster. (The games can only be played in teams – minimum 2 players, maximum 8.) You’re allowed to give up certain abilities in exchange for hints to the solution of clues too.

Ping was our Lightbringer (the torchlight given to her was smaller than we expected it to be), Daryl was the Scholar, Jo was the Oracle, Raj the Assassin (he was disappointed when he didn’t get any prop – he expected a toy knife or something hahahah), Berlina the Healer, Tim was Timebender, and Tania was Gemini – cloning Tim’s Timebender ability. We’d decided to have two Timebenders because Timebenders are allowed an extra 5 minutes in the game and it seemed sensible to have an extra 10 minutes on top of the base 45 minutes.

I was Lockmaster, which meant I held the passcode/solution to one of the clues in the room (indicated by the Lockmaster logo).

We did the “Materia Medica” room (you choose the room when you make the booking). This is how the Breakout website describes the room’s story:

A mysterious physician called Han appeared in the small town of Wu Shan one day and immediately became famous among villagers for his remarkable medicine and healing abilities. As the previous top physician in the village, you are determined to find out the secret of this mysterious man’s background and the ingredients of his miraculous medicine. On a quiet evening, while the physician is away on an errand, you quickly sneak in with your assistants to gather what information you can in hopes of recreating the same medicine.

The rooms are a little on the small side for eight people, but I’m not sure we would’ve won if we had half the number haha

The first room was lit mainly by a red lantern, and since I don’t like red lights, it made it seem even spookier than it was. There was a door with a small window above it, a ladder, and two wall-mounted wooden boards which had ropes attached and each one had a metal ring on the intertwined ropes. We found that the small window could be opened and by looking through it discovered that the door could only be unlatched from the other side. We couldn’t figure out what the heck we were supposed to do with the ring and ropes, which were both too short and thus couldn’t be used in the way we needed and so we, uh, basically “brute-forced” our way through the room.

No, we didn’t break the door down. We’re not supposed to do that! (If we spoil anything in the rooms we’d all have to pay for it, of course.) But Daryl contrived to hang himself on the window ledge and reach for the latches and unlock them. It was actually really scary to watch him hanging there (obviously all we could see were his legs on our side) and when he told Raj and Tim to let go of his legs so he could reach further… I think we were all terrified he’d lose balance and topple over headfirst into the floor on the other side. Then again, Daryl is a physical trainer and thus the most fit of all of us. He was clearly the one most able to do something like that. Raj might have been able to as well, since he also works out a lot, but the other 6 of us would just not have done that.

Anyway, thanks to Daryl’s balancing act, we got the door open and scuttled into the next – slightly bigger – room. We had to figure out the passcode to a locked box by doing some algebra-type calculations to figure out the weight of one of the herbs in one of the pots in a cupboard. It turned out to be nearly impossible for any of us to do algebraic calculations without a pencil and paper. After struggling for 15 minutes, Tim said we should do something about it and so we decided to use the Assassin ability with the Healer combination to get the answer directly from the gamemaster. The gamemaster was promptly called and someone was “killed” in exchange for the answer and then that someone was immediately “resurrected.” I don’t know who it was because we didn’t all need to go back to the first room and some of us decided not to go squeeze in there again.

The box was unlocked and a key acquired. It turned out to be the key to the drawers in the room. One contained a guide to Chinese Chess pieces. There was a picture of Chinese Chess on the wall, with the pieces all over it. Here we got stuck again because clearly the next step was to help us open the next door but we didn’t understand what we were supposed to do with the Chinese Chess diagram, which didn’t seem to match the “door.” The door in this case was designed like a huge medicine cupboard – small wooden drawers with labels. Basically like those you see in traditional Chinese medicine shops. The drawers were fakes and couldn’t be opened. Clearly the Chinese Chess diagram had some correlation with the drawers but we just couldn’t figure it out.

This time we decided to give up an ability in exchange for a hint – Lightbringer’s. We thought we wouldn’t need the torchlight, so we sacrificed that and the hint was to look under the drawers. There were further guides on the underside of the drawers. Boy, did we feel stupid. haha

But… That didn’t help either!! We were still horribly confused.

Jo and Tania surmised that the door was a rotating one but we still needed to know which parts of the door we needed to push on to get it to move. At some point, Jo had her hand on one and Tim reached up and touched another one on the other side – and the door moved. HAHAHAHA Talk about dumb luck.

The door was a rotating door, but we’d clearly (accidentally) unlocked it and so now we could push it backwards. That led to another tiny room. This third room had a wooden table with (fake) bloodied legs and arms on it. And another locked box. But this box had the Lockmaster symbol on it! So, YES, shortcut! I rubbed off the ink that was on the Lockmaster tag I held and we got the code instantly. In the box was… Another key. What else? haha

We looked around for another door. There didn’t seem to be any. We moved the sliding door forwards a bit and tried to see if there was another door behind it. It was pitch black behind the sliding door and we began to wonder if giving up the torchlight had been a good idea. I felt around behind the sliding door. Wall… Wall… HEY, A DOORKNOB. So we got the door unlocked and found the last room, which was also really dark except for two small electric “candle” lamps on top of a cupboard. There was a locked box on the cupboard. Above that was a row of five name plate thingies. Like those you see in some of the clan temples – with names of the deceased on them. On the backs of the name plate thingies were riddles in the line of: “My father’s father’s grandson’s son is X and he will carry on our traditions.” Stuff like that. We had to rearrange the names according to the generations, which proved to be quite tricky too. Especially because it was cramped and dark. I eventually backed out of the room along with a couple of the others because we couldn’t see the riddles and there was no point in getting squashed in there. We did poke around the previous rooms to see if there was any family tree or some other clues hidden in there. Tim eventually recommended taking the name plate thingies to the third room where were was more light. Jo, Berlina (I think? Or maybe it was Tania) and Tim had a go at it this time and we got the right combination after some debating! At this point I was surprised that the timer hadn’t gone off yet to signal the end of our 45 minutes…

Last key was acquired and the drawer in the last cupboard was opened. We grabbed the paper in the drawer and went back to the first room, thinking we were all done. The gamemaster came in and told us that nope, that wasn’t the right “secret recipe.” Back to the last room we scrambled. I pulled the drawer out completely. There was nothing under it or in the now-empty drawer space. The drawer next to it couldn’t be opened. But then Raj felt around in the empty drawer space and found a small wooden piece sticking out of the divider between the two drawers. He fiddled with it for a bit and after turning it a few times, managed to pull it out that released the other drawer. Ta-daaaaa, the final – and correct – recipe at last!

The gamemaster asked if we had any questions and we asked her how to solve the first clue with the intertwined ropes and metal rings. She said we were supposed to detach the rings with their ropes from the boards and use them to reach the latches from the window above the door and pull the latches that way. She showed us how to remove the rings and I’m convinced that it would have been entirely possible to be stuck in that first room for 45 minutes and just not be able to progress. Especially if you were only a small team of two or three and were loath to give up your abilities so early on to progress in the game.

We also asked about the second door’s clue and she showed us the solution. When she asked how we got the door open (since we obviously hadn’t solved the puzzle) we told her it was pure dumb luck.

We’d completed the room with 3 minutes 20 seconds to spare. And we hadn’t even used our Timebenders! Happy group pic ensues: 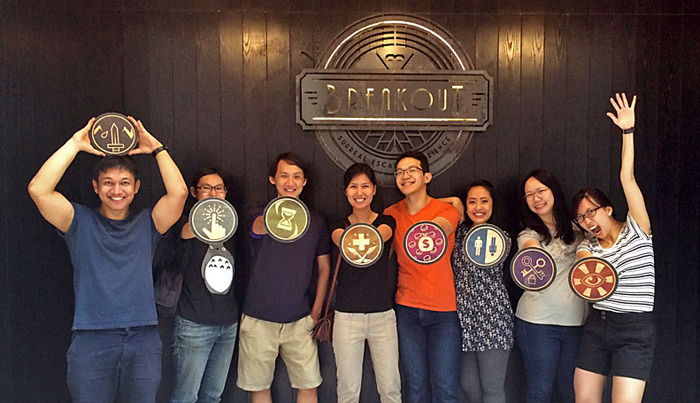 They also gave us little badges according to our characters as a reward for winning. Yay, Lockmaster badge! 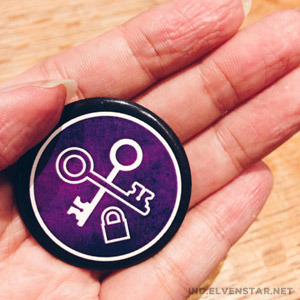 But really, we won largely out of luck. We were lucky that we had someone in the group who was capable of leaning almost all the way through the window to unlock that first door, and we were really lucky that Tim happened to touch the correct panel on the second door when Jo had her hand on the corresponding one. The only one we actually solved was the final clue. xD