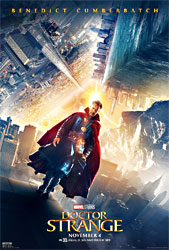 Doctor Stephen Strange is a brilliant but arrogant neurosurgeon who loses the use of his hands in a car accident. Bereft of his life’s purpose, he spirals into a near-manic obsession with trying to fix the nerves in his once-steady hands. He ends up in Kathmandu, under the tutelage of the Ancient One. But instead of finding healing, Strange finds himself caught up in a mystical battle to protect the world from a group called the Zealots, and a powerful being called Dormammu, who hails from the Dark Dimension.

Mordo shows Strange to his room and hands him a card with the word “shamballa” on it.

Mordo gives him a look and says, “It’s the wifi password. We’re not savages.”

The Not-so-good
(Nothing in this movie was outright bad…)

I left the cinema feeling a lot more satisfied than I did after watching Captain America: Civil War. (I really would have liked Civil War better if it had been labelled as an Avengers movie instead.) Good job on this, Marvel.