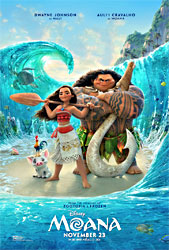 Pretty good movie overall, and I do really love the imagery, but it’s no Zootopia (that’s still the best Disney movie of 2016, and one of the best movies overall of the year).
Rating: ★★★