Waaaah. Massively delayed blog posts on my Japan trip from the end of February 2016.

Start with Day 2 because I arrived in the evening of Day 1 (after flying in on business class.

Yay for a lucky bid on my MAS flights this time). It was really cold and I didn’t feel one bit like walking around in the cold night. So I enjoyed my hotel room, Japanese TV channels, and some bento and convenience store snacks.

On Day 2, I met up with my friend, S! First, brunch at a kaiten-zushi (conveyer belt sushi) place in Ginza: 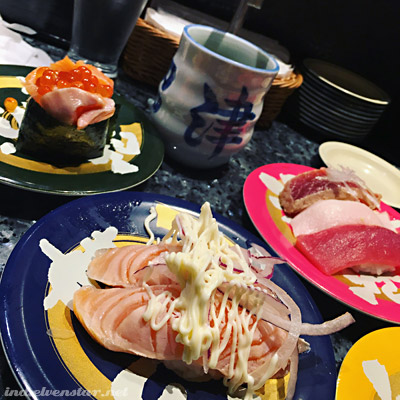 I learnt that Ginza was a mere 10-minute walk from Tokyo Station. Probably less than 10 minutes if you’re familiar with the route.

Ginza on a cloudy day: 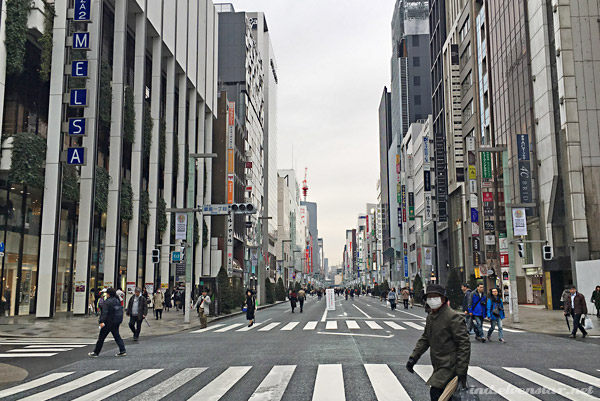 After that we went to the Edo-Tokyo Museum in the Ryogoku district.

The museum’s permanent exhibition vividly illustrates the past of Tokyo (known as Edo until 1869) through its exhibits and covers many features of the capital from the Edo Period to relatively recent decades.
In an interactive way, visitors are able to experience and learn about various aspects of earlier Tokyo, such as the way of life of people, Edo Period architecture, cultural heritage, political climate, commercial situation and more. Through numerous models of towns, figurines and life-sized figures, the museum makes it interesting to find out about how towns were constructed in the past.

It’s also apparently the sister museum to the Edo-Tokyo Open-Air Museum, which I visited in 2015. 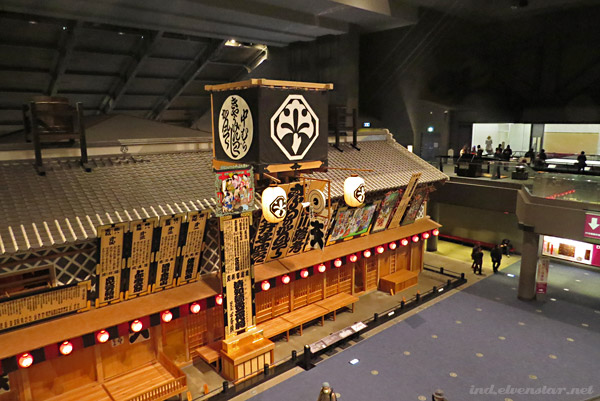 ^ Replica of the Nakamuraza Kabuki Theatre 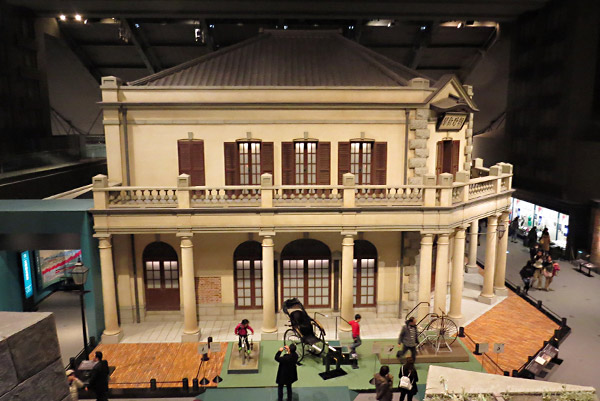 ^ I… think this is the replica of the Choya Newspaper Publishing Co. 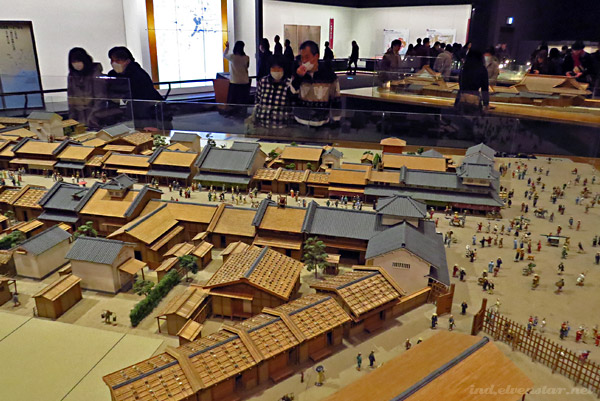 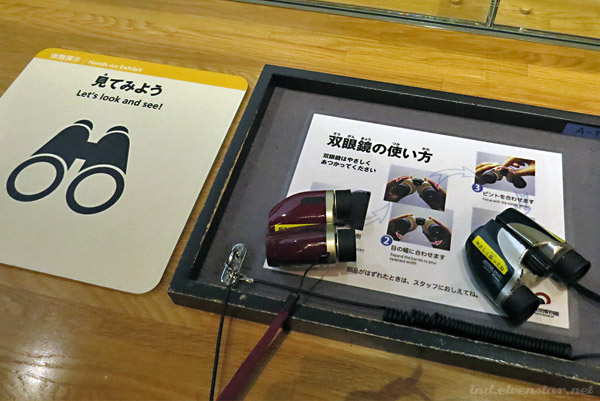 ^ They had little binoculars at the displays! Why? 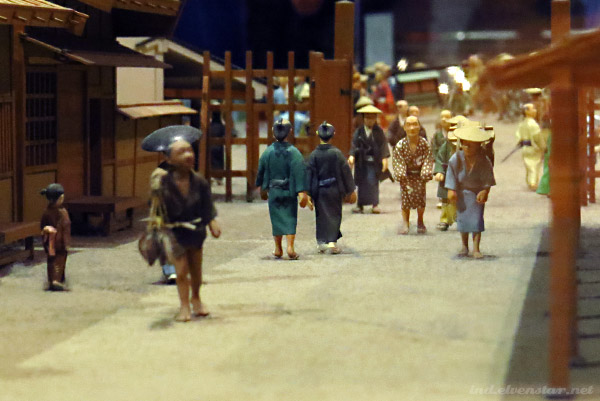 ^ Because the models are so detailed! 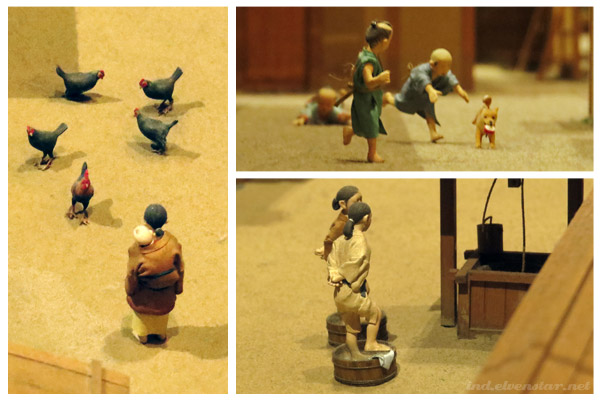 ^ Look at all the different activities portrayed. They even had miniature chickens and dogs! 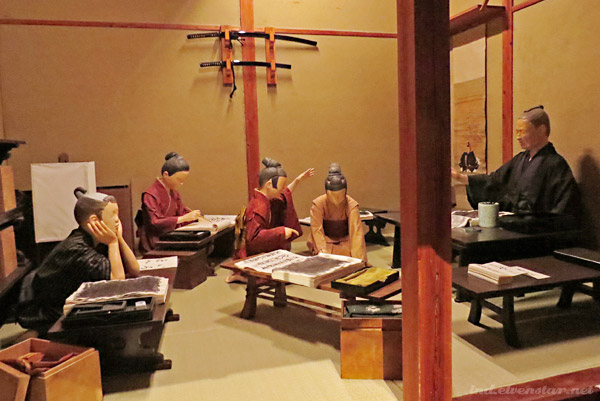 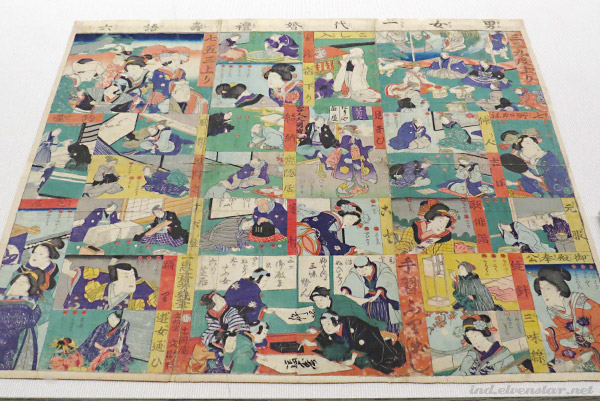 ^ Of course, they had other displays too. Like this old boardgame. 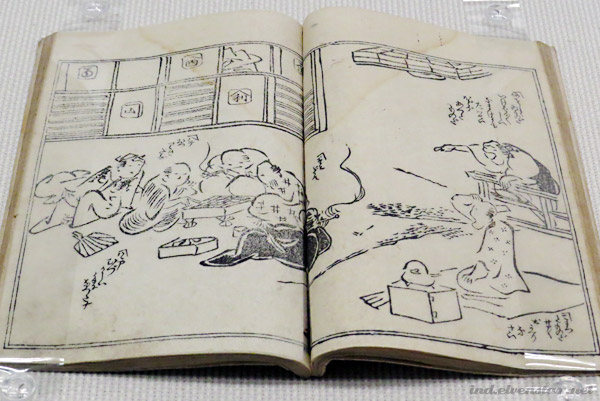 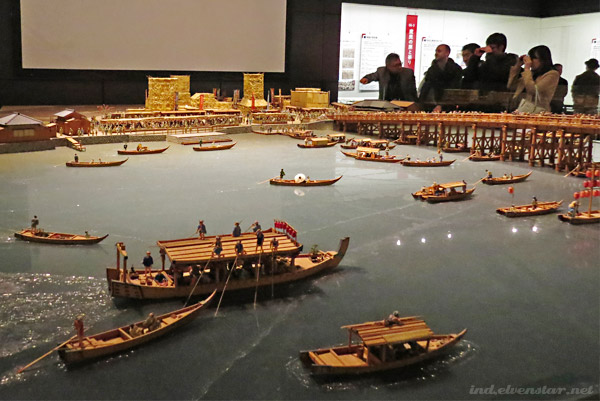 ^ Look at all the boats! 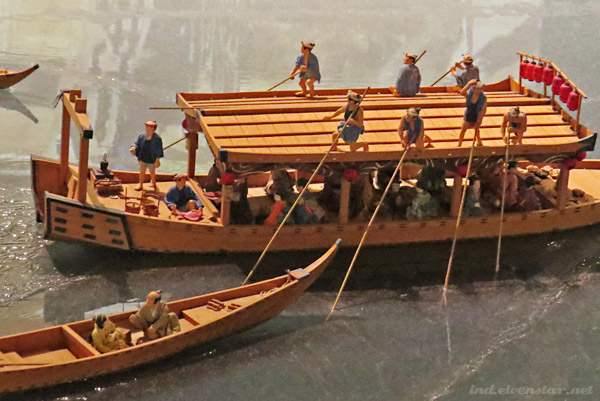 ^ So much detail and the variety. They did not get laze on the models, that’s for sure. 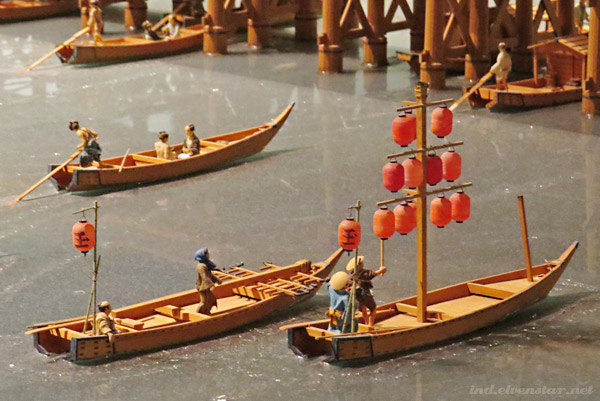 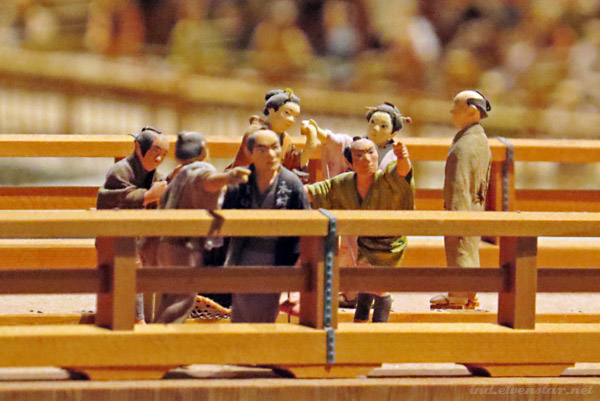 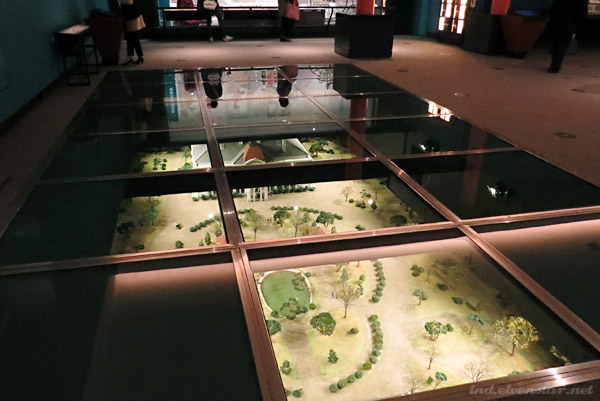 ^ There was even a model sunk into the floor. 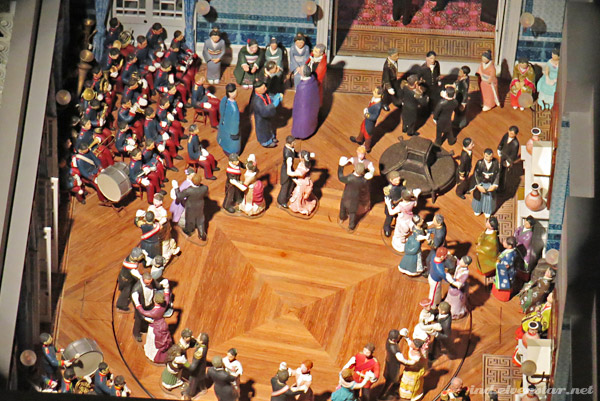 ^ And at certain times, the roof of that model opened up and music would play and the little figures would “dance.” 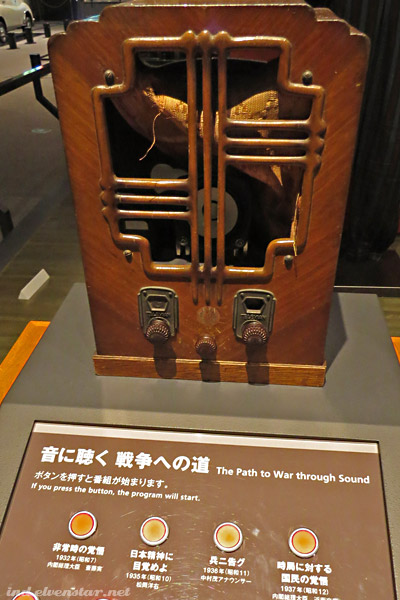 ^ If you pressed the buttons on the panel at the bottom, you could hear old radio programmes. Scratchy sound, but still cool. I have a feeling that if I understood exactly what they were saying, it would be all wartime propoganda. heh.

After the museum, we headed to Odaiba because I wanted to check out the Baratie Restaurant at FujiTV: 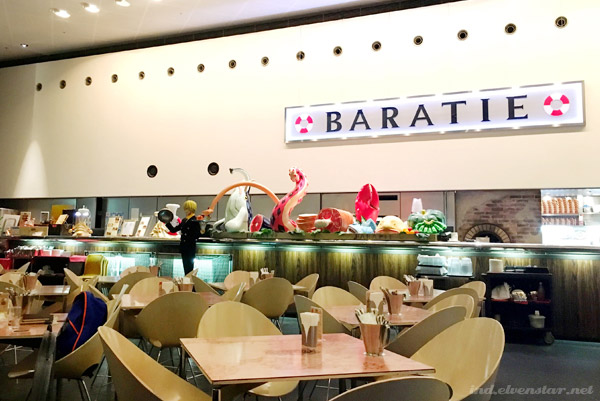 Yes, yes, it’s a manga/anime-themed restaurant. Or rather, a restaurant named after a restaurant in the One Piece manga. Sadly (but not surprisingly), the food was just okay. 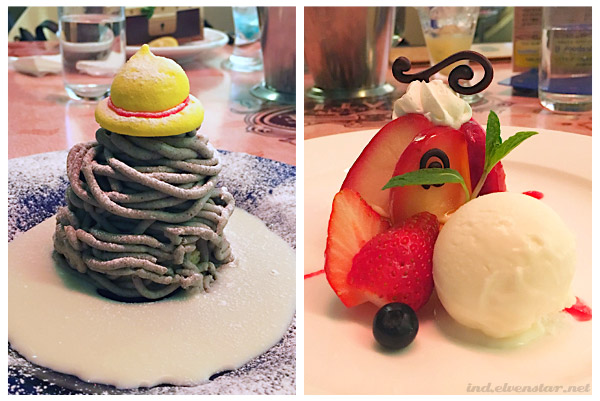 ^ The desserts looked really cute though!

I would have liked to look around Odaiba a bit more but it was raining pretty heavily after we left the museum, and continued to rain all the way into the night. This resulted in the ruin of my Aldo boots bought in London in 2013. The water got into the boots and my feet were all wet and cold. I think it’s a miracle I didn’t actually fall ill?

I parted ways with S because I wanted to go to “Chocolate Shake”, a monthly lindy hop event hosted by one of Tokyo’s lindy groups, Swing Gigolo. It was in Denenchofu, approximately 45 minutes from Odaiba by train. Had to buy an umbrella from a convenience store because I would have to walk a little way from the station to the venue and it was still pouring rain…

But I made it in the end – the place was surprisingly near the station. And it was a pretty dance hall too! I had a pretty good time, though I felt really awkward at first. Things got easier on me after they had their “welcome jam” for visitors from outside Tokyo, which in this case was three of us – one lady from Osaka, a guy from Germany, and me. Once they kind of recognised that oh, okay, that one (that is, me) isn’t a Japanese person, they seemed to warm up. hahah 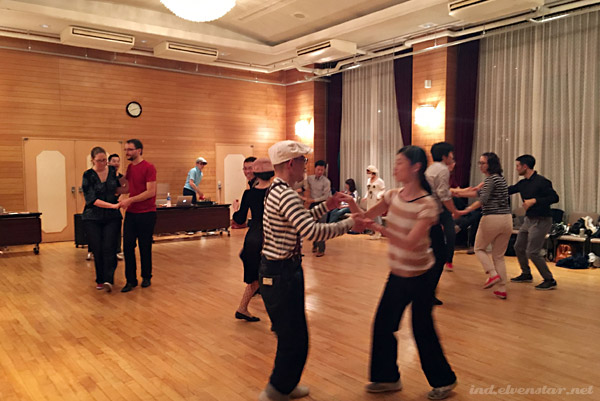 When I got back to the hotel though, I knew I’d have to ditch my boots and buy a new pair of boots/shoes to wear. My Aldo boots were wet through and I could see a gap between the sole and the rest of the shoe, which probably explained how so much water got it. Oh well.